Pope Francis speaks with Ukrainian President Zelensky: I pray ‘for peace and a ceasefire.’ 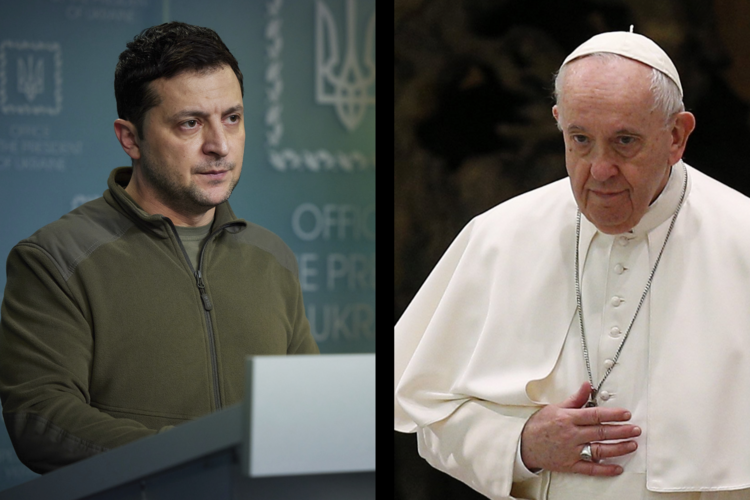 As Russian tanks and troops moved to attack Kyiv and explosions were heard across Ukraine’s capital city, Pope Francis spoke by phone with Ukrainian President Volodymyr Zelensky this Saturday afternoon, Feb. 26. He expressed “profound sorrow at the tragic events that are happening” in the country and, the president said, he “prayed for peace in Ukraine and a ceasefire.”

The news was broken in tweets from the Ukraine Embassy to the Holy See and minutes later by Ukraine’s president. The tweet from the embassy said (in Italian): “Today, Pope Francis had a telephone conversation with President Volodymyr Zelensky. The Holy Father expressed his profound sorrow at the tragic events that are happening in our country.”

President Zelensky said on Twitter: “Thanked Francis @Pontifex for praying for peace in Ukraine and a ceasefire. The Ukrainian people feel the spiritual support of His Holiness.”

As Russian tanks and troops moved to attack Kyiv and explosions were heard across Ukraine’s capital city, Pope Francis spoke by phone with Ukrainian President Volodymyr Zelensky this Saturday afternoon.

An informed Vatican source confirmed to America that the conversation had taken place but provided no further details.

Yesterday, Feb. 25, Pope Francis visited the Russian Embassy to the Holy See in Rome and spoke for more than half an hour with the Russian ambassador.

Today’s phone call to President Zelensky is being interpreted by observers as a gesture of solidarity and encouragement for Mr. Zelensky at a most critical moment in the history of his country and of his presidency, and as an expression of the pope’s deep concern for peace.

The two leaders have known each other since Pope Francis received President Zelensky in a private audience on Feb. 8, 2020, during the Ukrainian leader’s official visit to the Vatican. On that occasion, according to The Kyiv Post, they talked about peace in the Ukraine, and Mr. Zelensky said that Pope Francis called him “a president of peace.” Later, Mr. Zelensky wrote on Twitter, “@Pontifex does everything possible to achieve peace and harmony throughout the world.”

President Zelensky said on Twitter: “Thanked Francis @Pontifex for praying for peace in Ukraine and a ceasefire. The Ukrainian people feel the spiritual support of His Holiness.”

The pope and president spoke together today by phone with the help of an interpreter as a curfew was about to be imposed on Kyiv, a city of 3 million people, from 5 p.m. this Saturday evening until 8 a.m. on Monday morning. As they spoke, large demonstrations were being held in many cities and countries throughout the world in protest at the ongoing invasion of Ukraine by Russian armed forces from land, sea and air.

The Russian attack is in violation of international law and the United Nations Charter, and has already caused the deaths of hundreds of Ukrainians, including civilians, as well as the destruction of much property. It has also led to a massive exodus of more than 100,000 Ukrainians to Poland, Moldova, Romania and Slovakia.

The actions of the Russian armed forces in their drive toward Kyiv and Russian President Vladimir Putin’s comments since the war began have made clear that one of his main goals is the removal from power of the democratically elected President Zelensky and his government. The Ukrainian leader has refused to leave the country and has remained in Kyiv, and has been hailed by his fellow citizens as a hero.

A second goal of Mr. Putin is to gain recognition (already given by Russia last Monday) for the two separatist republics in the Donbas region in the east of Ukraine, which has a majority-Russian population. His third goal is the demilitarization of the country.

In 2020, President Zelensky asked the Holy See’s assistance to help release Ukrainians held as prisoners of war in Russia, the annexed region of Crimea and in the occupied Donbas region. The Vatican has diplomatic relations with both Ukraine and Russia. He also invited Pope Francis to visit Ukraine and to see the results of the conflict in the Donbas.

“I am sure he will be in Ukraine, not only in the capital,” said Mr. Zelensky in The Kyiv Post after his meeting with the pope in 2020. “I said that in order to fully understand what was happening in the (country’s) east, it is necessary to go there.”

“I am extremely grateful to [Pope Francis] for his Ukraine initiative, which helped 900,000 Ukrainians who had suffered in the Donbas,” Mr. Zelensky said in 2020, referring to the 15 million euros of humanitarian aid the pope sent in 2018. The money was raised at Catholic churches across Europe at the call of Pope Francis.