Praying for peace in Ukraine—even when it feels useless 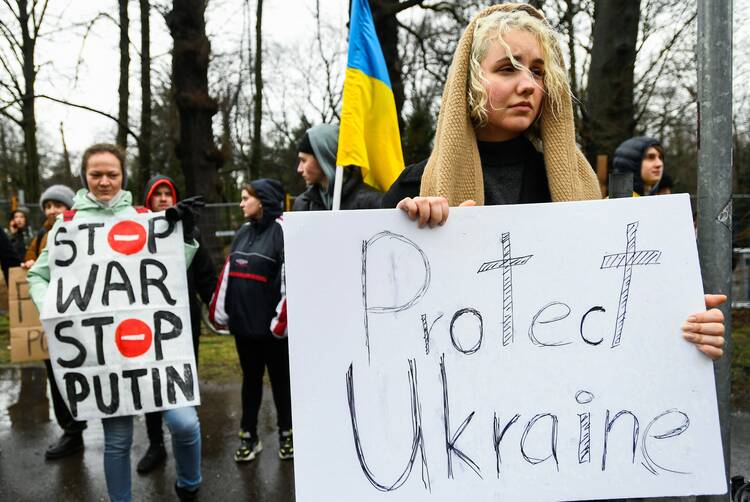 When the news of Russia’s invasion of Ukraine broke on Wednesday, I was scrolling through Twitter. What had been a mindless activity quickly became furious refreshing in a quest for more details and developments. Interspersed among the news and commentary—videos of a CNN reporter changing into protective gear as explosions rocked Kyiv and partisans finding a usual target to blame for a conflict thousands of miles away—were prayers.

“[I]n earnest prayer that no blood is shed and that if it must be our country does not intervene in such a way as to make it worse,” Elizabeth Bruenig, a staff writer at The Atlantic, said in a tweet. I hit the like button.

“Our Lady, Queen of Peace, pray for us,” the Catholic writer Shannon Last said. Heart emoji.

I asked myself the same question I always do in the wake of a tragedy that plays out in real-time on Twitter: What am I actually doing? Does liking a tweet count as praying?

I liked a screenshot of President Joe Biden’s prayer for the people of Ukraine and a call from a Jesuit priest for Catholics to “get your Masses on.”

Then I asked myself the same question I always do in the wake of a tragedy that plays out in real-time on Twitter: What am I actually doing? Does liking a tweet count as praying?

I got into bed and said an actual Hail Mary. But that too felt rather futile in the face of Vladimir Putin’s apparent threat of nuclear war against anyone who dares come to the defense of innocent civilians in Ukraine.

This, of course, is not a new problem. After every mass shooting in the United States, there are those who offer prayers for the victims and for sane gun laws—and those who deride “thoughts and prayers” as empty words. Those prayers, however, can be offered alongside support for universal background checks. And prayers for the end of abortion can be matched by material support for pregant women. You can pray in the face of climate change and make adjustments to your lifestyle to reduce your carbon footprint.

In the case of Ukraine, most Americans are unable to influence President Putin or the course of the war. So prayers are really all that’s left.

But in the case of Ukraine, most Americans are unable to influence President Putin or the course of the war (though we can donate to humanitarian groups on the ground). So prayers are really all that’s left. But what do they achieve? What am I supposed to say or feel when I pray for Ukraine? Is this about convincing God to intervene or simply softening my own heart so I can suffer with my Ukrainian brothers and sisters?

To get answers to these questions, I turned to my colleague at America, James Martin, S.J., who not only wrote the book Learning to Pray but has been a spiritual guide who, for the past eight years, has helped me process the (many) insecurities I have around my prayer life.

AM: Why should Catholics pray for peace in Ukraine?

JM: First of all, peace is something that Jesus desires. One of the most common phrases in all his public ministry is “Peace be with you.” In fact, it is the first thing that the Risen Christ says to the disciples after the Resurrection. Notice he does not say, “Believe that nothing is impossible with God” or “The Father has raised me from the dead” or even “I have conquered death,” all of which are true, but something simpler: “Peace be with you.” Christ desired peace for the disciples and desires peace for us. Christ also desires unity. “That they all may be one,” he prays elsewhere in the Gospels. And so peace and unity are at the heart of the Christian message. We should beg God to help us effect this peace, especially in war-torn places like Ukraine.

We should beg God to help us effect this peace, especially in war-torn places like Ukraine.

Are the prayers meant to ask God to change the course of events? To convert our own hearts toward peace? Something else?

That’s a hard question. On the one hand, there is the classical notion of God as unchanging and immutable, and so what God wants to do, God will to do. And, in this line of thinking, there is little we can do to influence that. On the other hand, there is the equally important notion of a God who responds to human needs and desires.

In the face of these two approaches, I think the best image of God is Jesus, who is of course the Incarnation of God. And in Jesus, we see a God who desperately wants to be close to us, so much so that he becomes one of us. And in the Gospels, Jesus asks us to name our desires. Remember in the story of Bartimaeus, the blind beggar, he says, “What do you want me to do for you?” So God wants to know what we want.

I do believe God hears our prayers and responds, though sometimes the response is not through a sudden turnabout of events but by turning our own hearts.

And I do believe God hears our prayers and responds, though sometimes the response is not through a sudden turnabout of events but by turning our own hearts: softening them, awakening in us a sense of compassion or even a righteous anger over injustice. So I think God both acts and also moves us to act.

What if I don’t feel or hear anything in response to my prayers?

That is another hard question. And we have to admit that this happens more frequently than we would like. I talk about this a great deal in Learning to Pray. For example, if we pray for someone to be healed of an illness and they die, our prayers were not answered as we would have liked. Of course, there are many answers to the question of unanswered prayers: God is testing us; God is giving us something else or something “better” (like patience); God is answering us in ways that we cannot see; and so on. But none of those answers satisfy every person who is facing deep suffering. That is, you can’t say to the parent of a child with cancer, “God is giving you something better.”

What advice do you have for someone who feels like their prayers for peace are futile?

First, to remember that God is mysterious and we don’t know how prayers “work” exactly. In other words, God is not a cosmic gum-ball machine where you “insert” a prayer and out comes a candy-coated result. God is always a mystery, ever beyond us. But that doesn’t mean that God is not interested in our lives. Christians don’t believe in the distant Aristotelian God as “Thought thinking thought.” No, God loved us so much that he became one of us, in Jesus Christ. And was willing to die for us. How much more “evidence” could we have of God’s desire to be near us?

These days I am praying fervently for peace, especially in Ukraine. How will these prayers be answered?

Also, we may not get what we ask for immediately, in this case peace, but we must trust that God is at work in the world and that our prayers are heard. These days I am praying fervently for peace, especially in Ukraine. How will these prayers be answered? Perhaps by God’s opening hearts and moving thoughts to ways of peace, concord and reconciliation. Perhaps by awakening in us an intense compassion for the victims of war. Perhaps by filling us with outrage over the suffering caused by war.

Remember that this is one way that God “works,” by moving hearts to action. How else would God act in the world?

Do you pray on Twitter? What’s the point of doing that?

Sometimes I write prayers and post them on Twitter. I hope that this helps some people to focus their prayers and pray together, even though there are many other places to go for prayers. And this morning, I was very moved by seeing footage on Twitter, from AP, of a Ukrainian woman being forced from her home and saying, through tears: “We have to leave our houses! What’s going on?” The look on her face, and the thought of this elderly woman fleeing her home in the unforgiving cold, moved me to prayer. So you could say that Twitter moved me to prayer.

What is your prayer for Ukraine?

Peace, peace, peace. And let’s be blunt: We pray that Vladimir Putin’s heart be moved so that he could see what immense suffering he is causing. He is Christian, apparently. I pray that he understands that Jesus Christ desires peace.