Pope Francis’ message for Lent 2022: Get off your smartphone and do good for others face-to-face 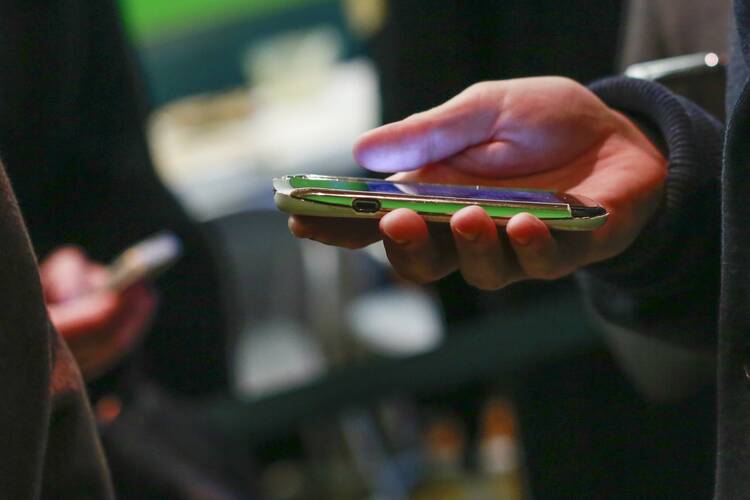 A person uses a smartphone in this illustration photo. (CNS photo/Shannon Stapleton, Reuters)

VATICAN CITY (CNS) -- Christians must persevere in generously doing good in the world, bolstered by prayer and by fighting evil in their own lives, including an addiction to digital media, Pope Francis said.

“Lent is a propitious time to resist these temptations and to cultivate instead a more integral form of human communication made up of ‘authentic encounters’—face-to-face and in person,” the pope said in his message for Lent, which begins March 2 for Latin-rite Catholics.

“Let us ask God to give us the patient perseverance of the farmer and to persevere in doing good, one step at a time,” and to know that “the soil is prepared by fasting, watered by prayer and enriched by charity,” the pope wrote.

Christians must persevere in generously doing good in the world, bolstered by prayer and by fighting evil in their own lives, including an addiction to digital media, Pope Francis said.

Released by the Vatican Feb. 24, the pope’s Lenten message was titled, “Let us not grow tired of doing good, for in due time we shall reap our harvest if we do not give up. So then, while we have the opportunity, let us do good to all,” which is from St. Paul’s Letter to the Galatians.

Christians are called to sow goodness their entire lives, but even more so during Lent, he wrote.

The first fruit “appears in ourselves and our daily lives,” radiating the light of Christ to the world, he wrote. And sowing goodness “for the benefit of others frees us from narrow self-interest, infuses our actions with gratuitousness and makes us part of the magnificent horizon of God’s benevolent plan.”

Christians must not grow tired of praying, he wrote. “We need to pray because we need God. Thinking that we need nothing other than ourselves is a dangerous illusion.”

“We need to pray because we need God. Thinking that we need nothing other than ourselves is a dangerous illusion.”

“Let us not grow tired of uprooting evil from our lives,” he added, underlining the importance of fasting and asking for forgiveness in the sacrament of penance and reconciliation.

Christians must resist “concupiscence,” the tendency to sin, which is a weakness that leads to “selfishness and all evil, and finds in the course of history a variety of ways to lure men and women into sin,” he wrote.

One sign of such weakness, he said, is an addiction to “digital media, which impoverishes human relationships.” Lent is an opportune time to cultivate healthy communication and face-to-face encounters.

“Let us not grow tired of doing good in active charity toward our neighbors” and of giving joyfully, he wrote.

“Let us put into practice our call to do good to all,” he wrote, “and take time to love the poor and needy, those abandoned and rejected, those discriminated against and marginalized.”

Doing good “with love, justice and solidarity are not achieved once and for all; they have to be realized each day” and require patience, prayer and hope.

And, Pope Francis said, doing good “with love, justice and solidarity are not achieved once and for all; they have to be realized each day” and require patience, prayer and hope.

Salesian Sister Alessandra Smerilli, interim secretary of the Dicastery for Promoting Integral Human Development, was among the speakers presenting the Lenten message at a Vatican news conference.

Around the world, she said, one sees the “winds of war, after decades of reckless rearmament,” a deadly pandemic, increasing inequalities and fundamental problems with economic and social systems.

But, she said, “God believes in the Earth and cares for it in the same way that a farmer does not abandon his land,” so in his message, Pope Francis is inviting people “to be that fertile soil that creates the conditions for the seeds to grow” and create something “different from the present.”

People must not turn their back and believe someone else will take care of things but must know “each one of us can do something” and must look for where there is a need and see others as brothers and sisters, he said.

Communities break down without this kind of loving concern and action, he said, and if everyone were to contribute, creating a “network of love, acceptance and mutual integration, then we will discover a more human world will be possible.”