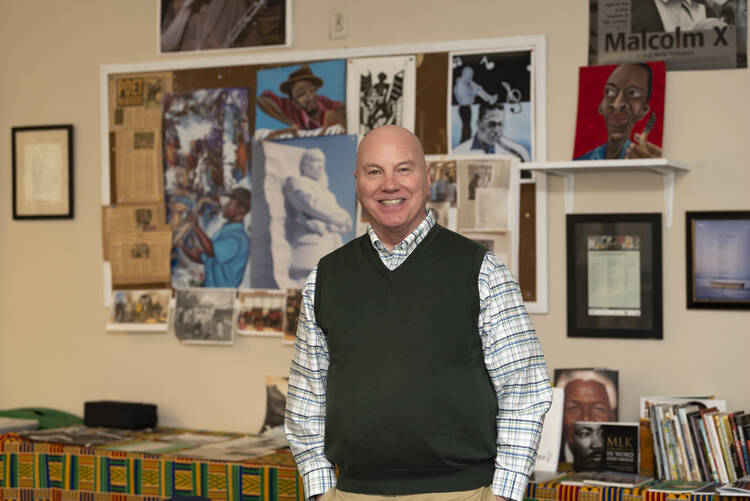 Editor’s Note: Joseph Ross, a poet who has taught English for 33 years, is now in his 10th year at Gonzaga College High School in Washington, D.C. His most recent book of poetry is Raising King. Ciaran Freeman, an art teacher at Gonzaga, interviewed Mr. Ross. The interview has been edited for length and clarity.

What role can poetry play in helping to form men and women for and with others?

Reading and writing poems slows us down. It requires us to look deeply at the world around us. Poets who take their craft seriously develop a way of seeing. I try to grow this vision in my students, so they see more than just what is before them, so they see the “why” of what is before them. Langston Hughes once wrote that “poets who write mostly about love, roses and moonlight must lead a very quiet life.” That’s bold. He saw poetry as a way to transform the world. I do too. It is exactly how the poet should be in the world.

Joseph Ross, an English teacher at Gonzaga High School in Washington, D.C., says poetry requires us to look deeply at the world around us.

On the commitment to justice in Jesuit education, the former superior general of the Society of Jesus, Peter-Hans Kolvenbach, S.J., once said, “When the heart is touched by direct experience, the mind may be challenged to change.” What poets have touched your heart?

My patron saint is Langston Hughes. I return to his work all the time for insight into my own life, for the truth about my country and for hope to change our society. A living poet who has been a mentor and friend to me is Martín Espada. His new book, Floaters, just won the National Book Award. It’s a searing look at immigration. I have used his poems in my classroom for years, and they continue to inspire my students and me. Naomi Shihab Nye is a Palestinian-American poet who has a way of seeing the world’s beauty without ignoring the suffering. I return to them a lot.

How have you seen your students’ hearts be touched by a direct experience with poetry?

I am fortunate to see this all the time. Gwendolyn Brooks’s “We Real Cool” is the perfect empathy poem. She is walking past a pool hall during school hours and sees seven boys in there playing pool. I would have written a judgment poem: Why are you cutting class? But she wants to know what they thought about themselves. She writes this beautiful poem: “We real cool. We/ left school. We/ lurk late. We/ strike straight. We/ sing sin. We/ thin gin. We/ jazz june”—and then this devastating last line—“We/ die soon.” They know. They know what their lives are going to be. We have students who will read that poem and see some of their own attitudes about themselves in there. They see people they know in there. It happens every year. It’s powerful.

“Widening the circle” is a phrase thrown around a lot today in Jesuit education. How have you worked to widen the circle of your curriculum in recent years?

We have to continually seek out authors in whom our students can see themselves. At the same time, I seek authors who will push our students to see beyond themselves. I have already mentioned Langston Hughes, Gwendolyn Brooks, Martín Espada and Naomi Shihab Nye. I would add Frank X. Walker, Lucille Clifton, Danez Smith, Leslie Marmon Silko, William Archila, Joy Harjo and Edwidge Danticat.

Poets are often thought of as recluses, but at Gonzaga, one of the most vibrant student clubs is Poets & Writers. What is the relationship between community and poetry?

Poets definitely need silence and solitude. That is where much of the work gets done. The poet has to sit down alone and face the page or the screen. But the poet also needs community. We have a wonderful poetry community here because our poets are humble and generous. We use a workshop process that almost always improves the poem. We sit with one poet’s draft and go through a detailed process. The poet hears others read and discuss his poem. He just listens and learns how others understand his work before he talks about it. Then the poet rejoins the conversation and the fire really starts!

That is what literature does. It consoles and confronts.

In 2018, Poets & Writers published Garden: Gonzaga Poets Respond to the Slavery Research Project.Can you tell me more about that book?

Some of our students, led by the history teacher Ed Donnellan, discovered Gonzaga’s history with slavery and spent two summers researching it in the Georgetown University archives. When our poets learned about this, they couldn’t stop talking about it. What dramatically changed us was discovering the name of Gabriel, a young enslaved boy who worked here. We would later learn the names of more enslaved people too, but discovering Gabriel’s name changed everything. They needed to respond. So, we took several months and created a chapbook of poems by students and faculty. It transformed us.

What were some of the lessons you learned from working on that project?

I learned to listen to my students! I also learned that the slavery research project affected our Black students in different ways than it did other students. Some of our Black students said things like “I never knew words could do this.” For some of them, it was an experience of consolation. For other students, it was sometimes an experience of confrontation. That is what literature does. It consoles and confronts. When I saw both of those movements at work, I knew we were doing the right thing.

What do you find yourself returning to from that body of work?

I always go back to Joseph Wete ’19, who wrote in Gabriel’s voice and recounted how Gabriel worked while others learned. It’s a powerful example of empathy. “I wiped soiled tables/ you sat and laughed… The garden grew/ I could not.” His alternating description can move a reader who is willing to enter this brave poem.

More recently you and your students published Who is Really Free? Gonzaga Poets Respond to the Call for Racial Justice. What motivated that project?

After the summer of 2020, when George Floyd and others were murdered, protests for racial justice took place all over the country. When we returned to school in August, it was all our poets talked about. I realized nearly every poem we workshopped in our club had to do with race. The book began to take shape, and it has changed us.

One of our seniors, Kevin Donalson ’21, wrote a poem in three sections, using the colors of the American flag. He described the red of “America’s rage,” the white of “privilege,” the blue of the “sorrow and sadness/ filling each citizen’s face.” He closed with the question we all kept asking, “But in America,/ who is really free?” This is one of the most moving and well-crafted poems I know. It was written by a 17-year-old.

Ciaran Freeman is an art teacher at Gonzaga College High School in Washington, D.C., and is a former Joseph A. O’Hare fellow at America Media.