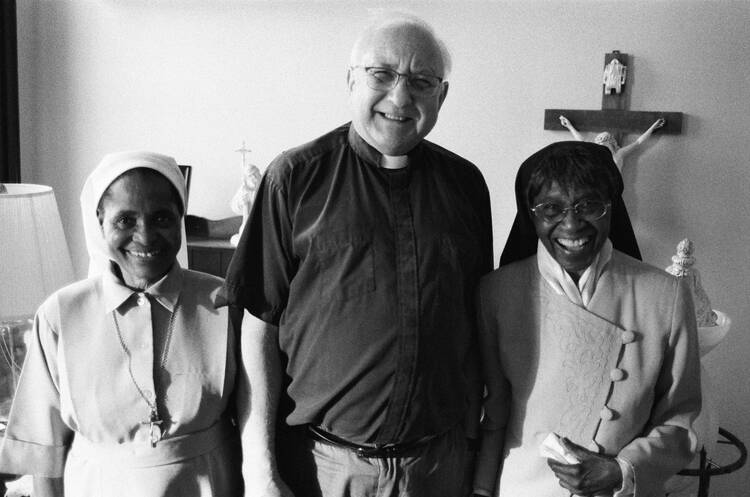 Juanita Sheeley, C.S.J., with the Rev. Gary Chmura, pastor of St. Aldabert's, and Rita Mary Mrema, C.E.S.M., who works at the parish. Photo by Deniz Demirer.

I will be the first to admit it: I did not imagine giant red robots to be part of my first trip to Cleveland.

On the final day of my trip there in June 2021, I listened to a man named Tim Willis tell his story. Beside me stood my two companions from America Media, Erika Rasmussen and Deniz Demirer. All around us, on an otherwise unremarkable plot of land in east Cleveland, stood 15-foot-tall or 25-foot-long robotic contraptions, painted bright red and accented with yellow flames. Mr. Willis had been tinkering with them for decades. After dropping out of high school, he taught himself how to build these machines.

“Get this on camera!” he said, as he flipped a switch and his fire-breathing dragon came to life. We obliged, of course.

In addition to being a self-taught robot maker, Mr. Willis, now 63, had survived six bullets the previous year when he fell prey to a brutal gang initiation ritual. He showed us pictures of the wounds to prove it.

This man had been a complete stranger 20 minutes earlier. But in Cleveland, as we had learned by this point in our trip, no one is a stranger.

“YOU MET TIM WILLIS?” That was Ms. Dionne’s reaction.

You do not forget Dionne Thomas Carmichael. She electrifies a room with one of those deep-down laughs that clings to your soul. Her style is impeccable; no outfit is complete without a corresponding hat (today it is short-brimmed and denim). She is charismatic and kind and tough and gentle all at once. We told her about our interaction with Tim, and she knew all about him. “I’m so glad you met him,” she said again.

Ms. Dionne is a lifelong parishioner of the St. Adalbert’s/Our Lady of the Blessed Sacrament Parish in Fairfax, just down the street from Tim Willis’s robotic creations. Community and parish are tightly connected in the Fairfax neighborhood; although not a parishioner, Mr. Willis has been a friend of the parish community for years.

St. Adalbert’s/O.L.B.S. was the first Black Catholic parish in Cleveland, and we drove eight hours from New York City to Fairfax to make a short documentary on their history and rootedness. That was “the plan.”

What was not planned was the radical embrace the community extended to us, not for any merit of our own, but simply because we were there. In Fairfax, and especially at St. Adalbert’s/O.L.B.S., life is lived together. Everyone is welcome, without exception, and yes, that included the local robot engineer and three wandering filmmakers from New York City.

“Somebody knows somebody,” said Ms. Dionne. “You’re not gonna meet a stranger.”

In the end, we went to Cleveland to be reminded of what the church could look like if we all took the idea of community to heart.

Phillis and Phillip Clipps have been parishioners at St. Adalbert’s/O.L.B.S. for decades. They are delightful people, and they sing the praises of their seven grandchildren and two great grandchildren as they welcome us into their home for lunch and an interview. Phillip works as a card dealer at Cleveland’s only casino. Phillis is the historian and record-keeper of St. Adalbert’s Parish and is writing a book about its history.

Though the community has a century of history under its belt, some of its most dramatic moments are very recent.

“In 2007 we got a new bishop” in the Diocese of Cleveland, said Phillis, “and he was sent to, a lot of people said, close churches.”

St. Adalbert’s/O.L.B.S. was on the bishop’s list of churches to “suppress,” which is a canonical term for a bishop’s decision to close a church when he believes it would be unsustainable for some reason. Suppression is different from a merger, in which the identity of two or more parishes is joined to create one new parish. So the suppression of St. Adalbert’s/O.L.B.S. meant that the parish would simply cease to exist, and parishioners would have to find other communities. The parishioners had meetings with the bishop to plead their case. Phillip told us the story:

“The bishop told me to my face in one of these meetings, he said, ‘Phillip, I closed my mother’s church in Boston.’ And I told him, I said, ‘I wouldn’t have closed my mama’s church. My mother would’ve had to die before I closed her church.’”

These are the kinds of people that make up the St. Adalbert’s/O.L.B.S. parish. It is unthinkable to such people, for whom bonds of family and community run deep, to close down a central community gathering place, much less their parish church. But ultimately, that is what the bishop did in 2010.

Ms. Dionne offered us a choice between water or beer after we finished interviewing her at Josephine’s Lounge, the nightclub she owns on 79th Street in Fairfax. It was just past 4 p.m., long before the club’s opening time, in the heat of the summer day. With a few hours of work still ahead of us, we had to settle for the water. It came in a red Solo cup.

“Josephine was my mother,” said Ms. Dionne, in reference to the bar’s name.

For Ms. Dionne, there is no separation between work and family, friends and faith. They are parts of the same tune. But they are also rooted in very particular places: St. Adalbert’s/O.L.B.S., Vel Scott’s Purple Oasis urban farm and garden, the family-run Fairfax Place skilled nursing facility. These gathering places take on a life of their own. When St. Adalbert’s closed in 2010, the whole Fairfax community, not only the Catholics, lost one of those anchoring places.

And then, the miracle: After the parishioners waged a relentless appeal campaign for the better part of two years, the Vatican overturned the bishop’s decision to close the parish. Phillis did the legwork, sending letter after letter to Rome until she had cardinals writing back to her. “We can assure you that we have gotten your information,” Cardinal Sambi, the former apostolic nuncio, wrote.

“Some of us were just stubborn enough to say, well, nothing beats a failure but a try. So let’s try,” said Ms. Dionne.

The church reopened in August 2012. “After the celebration, it was time to get to work,” said Ms. Dionne. People came from all around the community to scrub every inch of the church, which had been shuttered but otherwise untouched for two years. The cradle of Black Catholicism in Cleveland would once again see the light of day.

At Mass at St. Adalbert’s on Sunday, I was called out by name. For someone holding a camera, this is typically not a good thing. “We welcome America Media—Erika, Deniz and Kevin—who are filming parts of the Mass today,” the smiling lector said warmly.

We were welcome and we were family, because hospitality and family are the beating heart of the St. Adalbert’s/O.L.B.S. community. Many parishes talk about being welcoming; this one does not have to. It is lived out in unspoken but deeply felt agreement among its members. It is not superficial but love-rooted. Everything about this community is love-rooted. In other words, they are Christians.

What will shrinking Catholic parishes look like in 20, 50, 100 years? What will their priorities be? Hopefully, this steadfast church in east Cleveland offers an example.

Coffee hour after Mass feels like a family reunion. Well, it is a family reunion—the first coffee hour since the pandemic started, and you can feel it. As a courtesy, we told people that we would be filming them, but it did not really matter. They are the same on- and off-camera. “You’ve gotta get one of these cupcakes,” Phillip Clipps tells me. The apple pie flavor is delightful.

The community is small, but numbers are not the primary concern. I think, to some extent, that makes it prophetic. What will shrinking Catholic parishes look like in 20, 50, 100 years? What will their priorities be? Hopefully, this steadfast church in east Cleveland offers an example: Love and embrace everyone who enters your doors, immediately, without pretense and without exception. We might be surprised how many people would stick around for coffee hour.