Sarcasm is rarely ever just teasing. More often than not, it hurts. 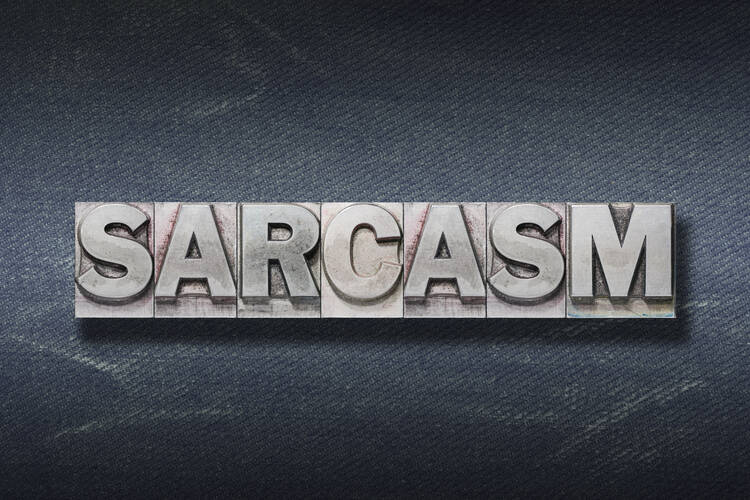 One day we find ourselves doing something a little off, a bit suspect, seemingly below our station  or outside of rational adult behavior: coloring in a coloring book, fearing chipmunks, watching a Hallmark movie. We are watching “A Winter Princess” and cringing in anticipation of the moment when our brother, wife or roommate is going to come in and unleash a comment: “Ahh, Hallmark! Wonder how this one’s going to end. Will she leave the big city behind and fall for her divorced high school prom date? What erudite viewing fare. You must be so edified.”

The typical, socially acceptable response to such sarcasm is to pretend to find it amusing; to force ourselves to go along with the joke that doesn’t really feel like a joke: “Yes, yes, Haha. I know, it’s ridiculous.” Followed by an excuse, a justification: “It’s a guilty pleasure. Just a way to blow off steam.”

But our real internal response might be to stew and feel annoyed, even angry. Because maybe we actually really do like these shows, actually are moved by them. And there is no guilt in that pleasure. Maybe we find the acting authentic, charming, fun. We know exactly how it is going to end up, but we always want to know how it is going to get there.

Can we ultimately trust the smirking ones in our midst, the sarcastic with a clever quip for our every move, for each vulnerable moment?

But where do those hurt feelings leave us? Can we ultimately trust the smirking ones in our midst, the sarcastic with a clever quip for our every move, for each vulnerable moment? Do we feel safe around them? Do they put us at ease? Is sarcasm ever helpful? To anyone?

Teasing is rarely ever “just teasing,” is rarely ever without its long-term cost. Unless we are quite close to the person we are teasing, or it is done with a light, inclusive spirit—and even then it is hit or miss—teasing is a perilous road to tread. It can create a low-grade hostile atmosphere. Receive too much sarcasm in our lives and we can become gun-shy, draw ourselves back in, reluctant to reveal our quirks, our phobias, for fear they will be mocked. But hey, it’s all in “fun.”

Irony can also mask. When we let loose with a sarcastic response it is often a way to shield ourselves. The incessant use of sarcasm keeps us from beholding the person and the moment before us. We are caught in our heads thinking of something funny to say about any given situation. We lose the person for the “humor.”

(As an aside, it may be worth noting that “the kids these days” seems to traffic in sarcasm far less than my peers and elders. If this is true even outside of my own experience—and I hope it is—it is just one more reason to be a fan of millennials.)

It can be scary to be seen, so we fend it off with a quip.

When we live off sarcasm and clever quips we are also shielding ourselves from being seen. We want people to see our wit and not our bare selves standing there, nothing clouding over our simple, unadorned humanity. It can be scary to be seen, so we fend it off with a quip.

Without always even realizing it, we often do not trust the ironist, the sarcastic one, because we do not really know them. They hide from us with clatter and noise and barbs.

To be blunt, if we find ourselves engaging the world primarily through sarcasm, it probably means we are living in great pain. We are operating from wounds and fears deep and unresolved; we are attacking the world before it attacks us.

To complain to the ironist about the joke, bristle at the quip or not laugh at their humor is often to be met with a dismissive comment: “Don’t be so uptight.” “I’m kidding.” “Relax, it's a joke.” In fact, telling someone those things has never, in all of human history, made anyone less uptight or caused anyone to relax. Telling someone to “lighten up,” is the surest route to their darkening up, and fast.

In fact, sarcasm can be insidious, devious because the ironist can both get his or her shot in, “Don’t worry, maybe when you’re 19 you’ll pass that driver’s test,” and also maintain his or her innocence, the veneer of care, even throw the blame back on you. “Kidding! Don’t take things so seriously! Besides, you’ll pass next time. I believe in you.”

And how rare and liberating it is to be around the non-sarcastic; to do a thing around someone and not be comically judged.

Sarcasm, at times, can have its rightful place: A comedian on a stage is meant to be ironic. Sarcasm is their stock-in-trade. We know what we are getting. We pay for their irony. It is distanced. Fun. Maybe uncomfortable in a general, “truth-telling” kind of way, but still safe. Even sarcasm directed at an audience member can be okay if it is done well, because the “target” is in on the joke with the audience.

“Look at this couple,” the comic says, pointing to two people in the front row. “Clearly on a first date, and the guy is wearing a ripped Whitesnake T-shirt. Really dressing to impress, bro. Good luck getting asked up to her place tonight.”

If we are that guy, we have to laugh, because we knew what we were in for—the whole performance is geared toward such moments.

But move the setting to most backyard barbecues, with the same thing said by someone you don’t know or even by an acquaintance who is not in your inner circle of friends, and it can be awkward and hurtful. And it happens all the time.

We all want to be funny, and some people genuinely are. And of course jokes can relieve tension. They can name what everyone is thinking but no one is saying. Who could survive life without a sense of humor?

People who traffic in a bare minimum of sarcasm, people who are present to us, listen to us, and don’t conceal themselves or us, are rare as any gem. They are the ones we want to be around.

In so much of American culture though, we can thrive not on so much as a sense of humor, but a sarcastic corruption of humor.

And how rare and liberating it is to be around the non-sarcastic; to do a thing around someone and not be comically judged. To be accepted as you are, with no teasing, no irony, no “edgy” jesting. To feel safe around people. How freeing to be around others who respect social boundaries, who can intuit that what most of us need at any moment, that what truly “lightens us up,” is sheer acceptance. Acceptance of exactly who we are.

We trust the one who is interested in us, who meets us where we are and says, “Oh, yeah, I could see where little rodents, even if they look cute, could be a bit disturbing.” Or even just a straightforward: “You’re nervous around chipmunks? Okay. Thanks for sharing that. So, where should we go for lunch?”

One who is not sarcastic, who is not dispensing irony at every moment, is not by default “humorless” or “painfully earnest.” No, people who traffic in a bare minimum of sarcasm, people who are present to us, listen to us, and don’t conceal themselves or us, are rare as any gem. They are the ones we want to be around.