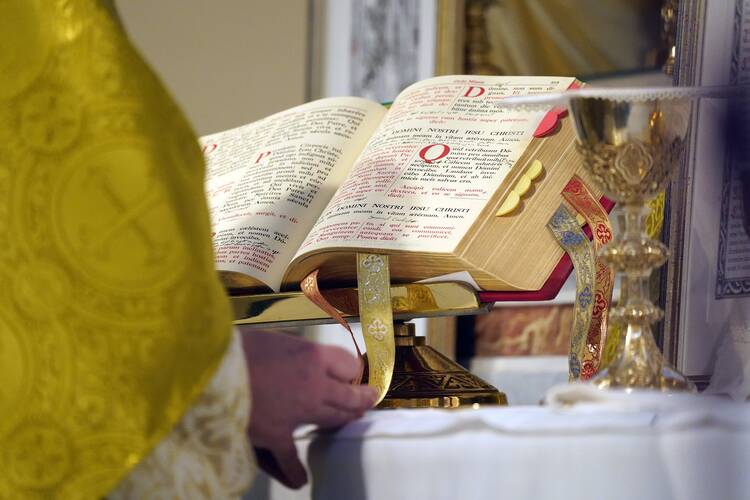 A priest prays with a sacramentary during a Tridentine Mass on July 18, 2021, at St. Josaphat Church in New York City. (CNS photo/Gregory A. Shemitz)

Late in 2020, Pope Francis released “Fratelli Tutti,” a beautiful and inspiring encyclical in which the pope argued that the fragmentation that too often characterizes humanity can only be addressed through genuine dialogue rooted in love. This exhortation to dialogue was not new for Francis; since the beginning of his pontificate, he has consistently urged Catholics to travel on the path of dialogue in order to attain a unity that transcends but does not erase difference.

We cannot be closed to others, Pope Francis taught, whether they be political or ideological opponents or whether they be people yearning to find a new life as immigrants. A “healthy openness never threatens one’s identity,” he wrote (FT 148). Too often we deny “the right of others to exist or to have an opinion,” and as a result, “their share of the truth and their values are rejected” (No. 15). Instead, Pope Francis urged us “to give way to a dialogic realism on the part of men and women who remain faithful to their own principles while recognizing that others also have the right to do likewise.” This, he continued, “is the genuine acknowledgment of the other that is made possible by love alone.”

I have long found Francis’ vision of dialogue attractive. For this reason, I find myself confused by his response to Catholic traditionalism.

I have long found Francis’ vision of dialogue attractive. This vision has important antecedents in the church’s tradition, ranging from early Christian theologians to St. Francis of Assisi to St. Thomas Aquinas to the documents of the Second Vatican Council. More than that, his vision seems to me to be absolutely vital for our times when political and theological polarization seem intractable.

For this reason, I find myself confused by Pope Francis’ response to Catholic traditionalism, both in the publication of the motu proprio “Traditionis Custodes” last August and in the release of responses to questions regarding the implementation of the document last week.

I am not a traditionalist, liturgically or otherwise. The parish I attend with my family is about as far from a traditionalist parish you can get. Liturgical dance? Check. Felt banners? Absolutely. Guitars and drums? It goes without saying.

There is much about traditionalism that I find troubling. Traditionalists are often suspicious of Vatican II, particularly of the implementation of the council, seeing it as in some ways a break from tradition. I view the council through the lens of my study of early Christianity, recognizing that, far from breaking with tradition, Vatican II was a recovery of much from early Christianity that had been neglected. Traditionalists also place inordinate emphasis on the importance of what had been called the “extraordinary form” of the Mass and view the “ordinary form” with thinly veiled (and sometimes completely unveiled) disdain. These views tempt traditionalists to understand the traditionalist movement as preserving “real” Catholicism in contrast to the “fake” Catholicism that followed the implementation of Vatican II.

Such attitudes are a threat to ecclesial unity and need to be addressed. But Pope Francis’ response seems to me to be uncharacteristically heavy-handed. Whereas he has a long history of advocating for dialogue with adversaries, arguing that unity cannot be attained by the suppression of one group by another, Francis appears now to be choosing just that—suppression. To be clear, the pope has not eliminated the usage of the pre-Vatican II Tridentine Latin Mass, but the steps outlined in “Traditionis Custodes”and the most recent responses to questions about the motu proprio appear aimed to reduce the size and impact of traditionalist communities within the church.

I cannot help but wonder how the pope’s most recent actions do anything but alienate our traditionalist brothers and sisters.

In his 2015 visit to the United States, Pope Francis encouraged the bishops to “dialogue fearlessly” and to do so from a position of genuine encounter whereby they “realize deep down that the brother or sister we wish to reach and redeem, with the power and the closeness of love, counts more than their positions, distant as they may be from what we hold as true and certain.” Anything else alienates, he argued.

I cannot help but wonder how the pope’s most recent actions do anything but alienate our traditionalist brothers and sisters.

Years ago I was invited to be part of a private group chat whose Catholic members are predominantly traditionalist. I have met a number of them in person, and I count all of them as friends. Our dialogue with each other has not resulted in some grand agreement; we agree on very little. Yet we hold our theological disagreement in creative tension with the unity we know we have in and through Christ.

Unity without uniformity. This is what the kind of dialogue promoted by Pope Francis aims to achieve. I have long appreciated Pope Francis’ willingness to allow for seemingly conflictual theological and moral views to be held in a tension that can be brought into harmony through the Holy Spirit. As he said in a homily at a Mass for ecclesial movements on Pentecost in 2013, “only the Spirit can awaken diversity, plurality and multiplicity, while at the same time building unity.” Any attempts to force uniformity close the door to the Spirit. Yet, in the name of unity, Francis appears to be forcing the kind of uniformity he has consistently warned against

At a time when we as a church are embarking on a synodal path, I have difficulty understanding why a more synodal—a more dialogical—approach is not being taken with traditionalists. While there are many aspects of traditionalism with which I have issues, I have also learned a great deal from them, particularly about the centrality of beautiful liturgy and about the ways in which an all-encompassing faith can and should transform one’s life. The traditionalist voice is one among many voices from which the church can and should learn, and as such, traditionalists should have a place at the synodal table.

A few years ago, I wrote a defense of Pope Francis’ understanding of dialogue against those who understood dialogue to be an empty buzzword, a ruse by Francis to attain certain ends that had already been predetermined irregardless of opposition. In the wake of “Traditionis Custodes,” my traditionalist friends are again questioning how genuine Francis’ call to dialogue really is. And this time, I can’t figure out how they’re wrong.

@gregorykhillis
Show Comments ()
Join the conversation: Login or create an account
Before you can comment, you need to update your profile to include your first and last name, as required in our comments policy. Then reload this page and you'll be set up for commenting. Update your profile