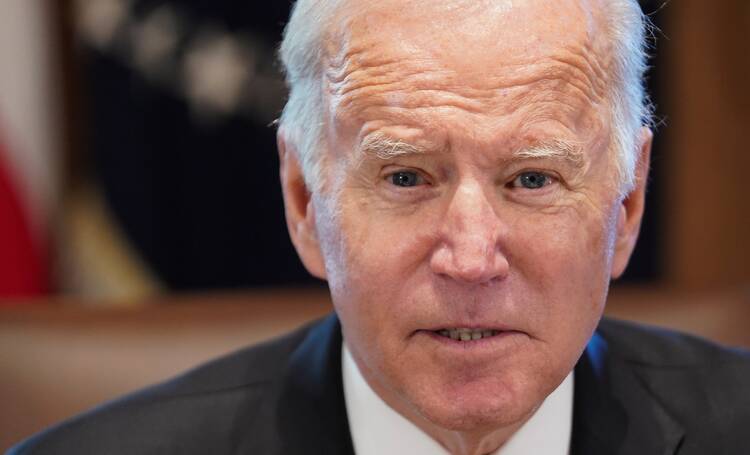 Ronald Reagan kept a jar of jelly beans on his desk in the Oval Office. Franklin Delano Roosevelt secretly collected pig figurines and had them not only in the Oval but all over his bedroom and study. Barack Obama kept a pair of red boxing gloves given to him by Muhammad Ali in his private dining room.

This week, President Joe Biden installed a new touch of his own to the White House: a framed copy of a “Hagar the Horrible” cartoon. In it, Hagar yells to the sky, “Why me?” to which God replies, “Why not?”

Joe Biden’s favorite Hagar the Horrible cartoon is now set up in the Oval Office.

It wasn’t there earlier in his presidency pic.twitter.com/Pzf81ahx4o

As strange as it might sound for a U.S. president to place a cartoon about a bumbling Viking raider and his family in the Oval Office, that specific cartoon strip has in fact been with Mr. Biden for decades. What’s more, it is deeply connected to his faith as a Catholic.

In 2015, Mr.Biden told then-CNN host Piers Morgan that his father had given it to him shortly after his first wife Neilia and infant daughter Naomi were killed in a car accident. “He could sense I was beginning to lose my faith for the first time in my life,” then-Vice President Biden told Mr. Morgan of his father’s gesture. “But he wasn’t going to let that happen to me. So, he went to one of those Hallmark card stores and bought a rectangular frame with this cartoon in it.”

President Joe Biden installed a new touch of his own to the White House: a framed copy of a “Hagar the Horrible” cartoon. In it, Hagar yells to the sky, “Why me?” to which God replies, “Why not?”

Mr. Biden understood the gift as, in part, his father acknowledging the sometimes-brutal randomness of life. “My dad was always saying to us when we were down about something, ‘Where is it written that the world owes you a living, pal? Get up,’” he told Mr. Morgan. “This cartoon was his way of saying there is no way to rationalize what has taken place. It can happen to anyone, at any time.”

But it has also served Joe Biden as a constant call to remember the situation of others. “It’s so important to remember that however bad things may seem, a lot of people are going through a lot worse than you,” he said at the time. “And the way they get through it is other people reaching out to them to give them solace, and in finding a purpose.”

What President Biden might not know is that that cartoon itself is also the result of the relationship between a Catholic father and son. “Hagar” creator Richard Arthur Allan Browne, known professionally as Dik Browne, was a child of the Great Depression who grew up poor in the Hell’s Kitchen neighborhood of New York City. Fellow cartoonist and friend Craig Flessel kidded that as a child, Mr. Browne “spent a third of his life on his knees doing Hail Marys” at Catholic school. During World War II, he drew maps and technical charts and created a comic that appeared in Army and Air Force newspapers. Afterward, he served as a court illustrator, worked in advertising (he designed the Chiquita Banana logo) and illustrated a number of books by Bishop Fulton Sheen.

In 2015, Mr. Biden told then-CNN host Piers Morgan that his father had given it to him shortly after his first wife Neilia and infant daughter Naomi were killed in a car accident.

Mr. Browne’s talent caught the eye of cartoonist Mort Walker, the creator of the “Beetle Bailey” cartoon, and in 1954 they created the popular spin-off about Beetle’s sister, “Hi and Lois.” “Hagar” would come 20 years later, and in many ways was the story of Mr. Browne’s own life and family. The name “Hagar the Horrible” was Mr. Browne’s sons’ name for him, and his big, bearded, messy main character resembled him greatly. One of his friends told the story of Mr. Browne preparing to leave home to meet up with some of his cartoonist peers. He was wearing mismatched socks and clashing patterns, and he had his shirt tail out. His wife, Joan, said, in what sounds like a perfect punchline for a “Hagar” strip: “I hope you get lost. I would love to describe you to the police!”

The comic regularly featured situations from his and his children’s lives but also occasionally offered thoughts about faith and religion. Hagar jokes with a local monk, Brother Olaf, for his boring homily or asks him to pray that God will help him (only to reveal what he needs help with is invading a town, which Olaf thankfully refuses to do).

But at other times, as in President Biden’s favorite strip, the comic can get quietly challenging and profound. “Is this what I deserve?” a marooned Hagar hollers to the sky on a stormy night, his ship sinking in the distance. “No…” says a voice from the clouds. “I went easy on you.”

It almost sounds like the sort of thing Mr. Biden’s father would say. It is also exactly the kind of thing Mr. Browne would say to his son Chris, who told The Washington Postthat he worked with his father on the strip from the start and took over when his father retired in 1988.

“Why not?” is not the callous response of an unfeeling God but an expression of expectation, of what this hard moment might allow us to accomplish.

In fact, just like President Biden, the younger Browne has long kept a challenging quote from his father in view: “For years,” Chris Browne told The Post, “I’ve had on my desk a quote of my father’s that says simply, ‘My son can do better than this.’” This was something his father regularly said to him as they collaborated: “After I’d worked really hard on a set of Hagar dailies...he said: ‘If anyone else had given me this work, I would say it was terrific. But you’re my son, and my son can do better than this.’”

As with President Biden, Mr. Browne’s words have served as ongoing inspiration for his son. “It has really helped me on raising the bar on myself.”

Since his election, President Biden has taken on the role of “America’s Catholic Dad” in the public imagination. He is the old retired guy walking around in his cool sunglasses, humming Michael Joncas tunes and occasionally making some awkward dad-is-more-out-of-touch-than-he-thinks type statements, and more than anything really wanting everyone to get along and not make mom (a.k.a. Dr. Fauci) sad.

But one thing that often gets lost is the challenge at the heart of his message and also that of his favorite cartoon: The common good is only achieved through self-sacrifice. “I understand that many Americans view the future with some fear and trepidation,”he said in his inaugural address. “But the answer is not to turn inward.... Here is the thing about life: There is no accounting for what fate will deal you. There are some days when we need a hand. There are other days when we’re called to lend one.”

And in that reality, Mr. Biden also finds the seed of a great and eminently Christian (and Christmastime) kind of hope. Rather than a reason for complaint, hardship is our opportunity. “It’s been in the most difficult of circumstances that the soul of our nation has been forged,” he said on Thanksgiving Day 2020. “Why not?” is not the callous response of an unfeeling God but an expression of expectation, of what this hard moment might allow us to accomplish.