When Thanksgiving gratitude comes with a side of guilt 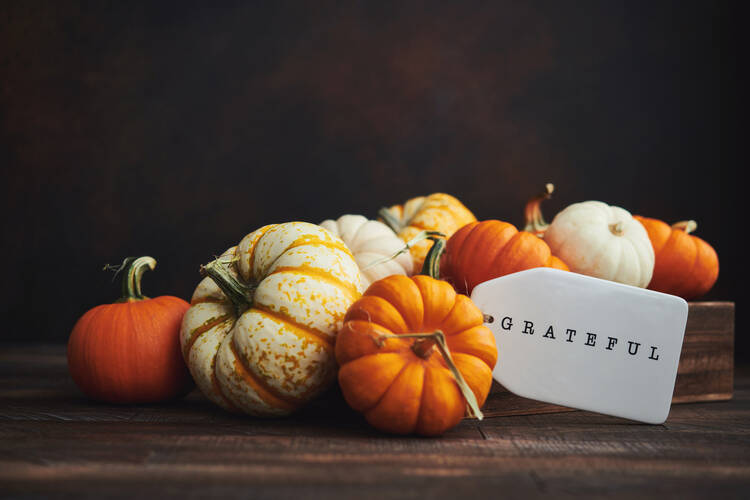 It is Thanksgiving in America, that splendid holiday when families crowd around dining room tables stacked with succulent food and desserts, somberly bow their heads and undergo their ritual shaming by college-aged children newly aroused to human misery in Western Civ class. (cf: Emily Dickinson, George W. and the Savage Fist of American Empire.)

-Stop saying grace, Mom. STOP. How can we be ‘grateful’ for all the good things we have when so many other people in, for instance, Apollonia, have nothing?

-Apollonia was a saint for dentists, honey. You mean Appalachia.

-Wherever. And they’re miserable there. And we should be, too. And my new cashmere sweater was made under brutal conditions by workers in Vietnamese sweatshops, workers who probably wouldn’t even like me.

It goes on. And it is hard to take, and potent. How can we be grateful for these sweet potatoes when they were grown using fossil fuels that are melting the planet; for the houses we live in when they sit on land wheedled away from Native tribes; how can Caucasian families be grateful for their comfortable financial status when, in some part, it is seeded by generational wealth made at the expense of African Americans down through the centuries.

How can we be grateful for being vaccinated against Covid when, in more than a few countries, it will be years before people get their shots.

Many others would seem to agree with this worldview of American inequity. The argument is made in a paper by the RAND Corporation that over the past several decades, vast income inequality has cost middle and working class Americans a total of $50 trillion in take-home pay. “Imagine how much safer, healthier, and empowered all American workers might be,” write Nick Hanauer and David M. Rolf in Time magazine, “if that $50 trillion had been paid out in wages instead of being funneled into corporate profits and the offshore accounts of the super-rich.”

Pope Francis in “Fratelli Tutti” declares that the blessings of prosperity in a world of great need are in one sense outright theft: “If one person lacks what is necessary to live with dignity, it is because another person is detaining it,” writes Francis. “Saint John Chrysostom summarizes it in this way: ‘Not to share our wealth with the poor is to rob them and take away their livelihood.’”

If we buy (utterly downer) voices like these, then giving praise to God at Thanksgiving truly is bewildering, startling, decentering. The unjust ways so many of our blessings were handed to us almost seem to erase God from the equation of human dealings entirely.

The unjust ways so many of our blessings were handed to us almost seem to erase God from the equation of human dealings entirely.

And the bizarre truth is it is precisely our bewilderment at human inequity on God’s planet that can lead us to the very heart of God. And the heart of God is probably the best way to begin to address inequity.

Because until the sweatships close, until our food is grown in greener ways, until Black and brown families gain wholesale access to better jobs and higher incomes, until billion-dollar drug companies share their vaccine technology with the world, until all wrongs get righted (they never will be) or until at least half, or a third, or 1/100th of them are properly addressed, people will suffer—and the earth they live on will, too.

And the most piercing Marxian analysis, or the most air-tight socio-economic research paper about the horrific inequities the world over, will always in some sense be unable to pierce the very mystery of how God works in inequity; will be unable to pull apart the way the divine lives and moves and even redeems through every bit of suffering, every portion of pain, every jot of social corruption.

We do not and maybe never will fully know the answers to why God gives some more and others less. Or why God “allows” a world where some have more and others less, where the wicked prosper while the virtuous fail. (Or why God does not so much allow these things but is hamstrung by his own decision to give us free will, which the powerful can run wild with, and which God probably regrets daily.)

In addressing injustice and suffering, we begin to look for the way God is shining a beam of light onto some kind of hope.

Ultimately, all human wisdom and scholarship, all deep spiritual pedagogy and profound mystical insight, have staked out approximately one quarter of one fleck of infield dirt on the vast diamond of God’s inscrutable ways. But our “not knowing,” our admission of a base incomprehension of God’s work through human pain, throws us back more resoundingly to the feet of God himself. Once we get in touch with our own smallness before the mystery of the divine, then we can let go of trying to be in charge of things, and let God be God, fully in command. And in addressing injustice and suffering, we begin to look for the way God is shining a beam of light onto some kind of hope.

One place that light does shine on, clearly and unswervingly, is solidarity. Solidarity, as Pope John Paul II puts it, is “a firm and persevering determination to commit oneself to the common good; that is to say, to the good of all and of each individual.”

In 1994, Taco Bell sold the compilation CD Do Something (McLachlan, Sarah; Doctors, Spin, et al.), in order to encourage American youth to do something for the world. And if we don’t want to get on the wrong side of John Paul II and Taco Bell, we better, you know,do something. Something to move the dial, at least a little bit, in regard to Pfizer or food production or sweatshops or any slot in the litany of kitchen table collegian prophecy.

At Thanksgiving, if we are Christians, we give thanks. There is no alternative. We do not operate our lives with spreadsheets in front of us delineating what exactly we can or cannot be grateful for. I know someone who gives thanks for every last brutal and death-dealing thing in his life. The world is God’s, all of it. All that is bad and good, just and unjust, lives, rests and dies under God’s watch, breath, shadow. We return it all to God, to do with it as he will, and in so doing we become liberated.