Why is Pontius Pilate in our creed? 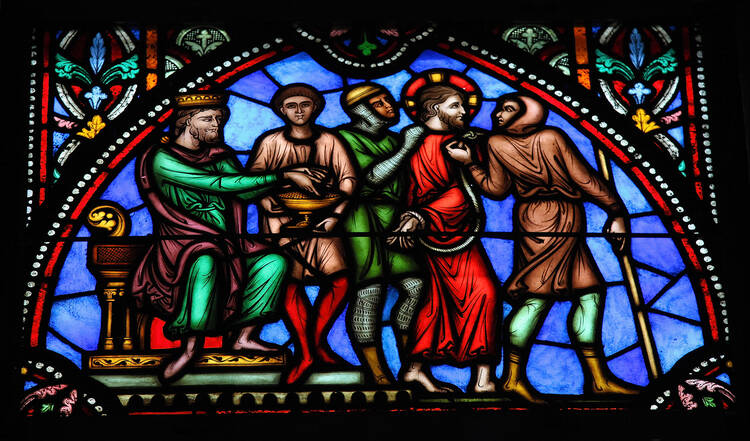 A Reflection for the Solemnity of Our Lord Jesus Christ, King of the Universe

One of his first official acts was a display of banners that offended religious conservatives. He responded with violent threats but backed down when resistance stiffened. His patterns of using excessive violence against protesters would eventually lead to his being sacked by his superior in Syria.

What we know from extra-biblical sources, such as the Jewish historian Josephus and Philo of Alexandria, corresponds to the Gospel portrayal of Pontius Pilate, a Roman functionary who freely used violence to stay in power but who yielded when he feared provoking the same against himself.

The Nicene Creed, which so many Christians still profess weekly in our liturgies, was adopted in 325 A.D. as an essential statement of what we believe. It is cosmic in scope, proclaiming the creation of the world by God the Father Almighty, its redemption by his Incarnate Son, Jesus Christ, and the “resurrection of the dead and the life of the world to come.”

Yet this mystic declaration links all its cosmography to a concrete moment in history. It does this by referencing the names of two mere mortals: He was born to the Virgin Mary and “he was crucified under Pontius Pilate; he suffered death and was buried.”

This mystic declaration links all its cosmography to a concrete moment in history.

In mentioning a woman who would have been unremembered by history and the petty prefect of an unruly, unimportant province of the Roman Empire, our creed thus reflects a core irony of our faith. We proclaim the world’s origin and its destiny, but we do not do so through scientific study or philosophical reflection. No, we root it all in an obscure junction in history.

Enough time had passed for the last of our Evangelists, St. John, to revel in this irony as he composed his Passion account. At the height of power—his own and his empire’s—the Roman prefect Pontius Pilate judges Jesus of Nazareth, the King of the Jews. In this moment, who Jesus is and what he represents count for nothing because neither is powerful.

Yet the correspondence of Christian revelation to the depth of human nature is so clearly revealed as Pilate judges Christ. Those who wield power can never cease fearing to become its victims, while the powerless have nothing to lose. That they resist the powerful suggests their origin in a world beyond our own.

Pilate holds all the power in his own hands, but it is not enough to still the palpitations of his heart. Like all before and since, he wields power until the real prince of the world, growing weary of him, sweeps away his puppet.

In mentioning a woman who would have been unremembered by history and the petty prefect of an unruly, unimportant province of the Roman Empire, our creed thus reflects a core irony of our faith.

Ours is an ironic faith. The force that summoned the world into existence stands before an already jaded and wearied world as pure folly. Speaking for the world, Pilate tries, as best he can, to understand.

So Pilate said to him, “Then you are a king?”
Jesus answered, “You say I am a king.
For this I was born and for this I came into the world,
to testify to the truth.
Everyone who belongs to the truth listens to my voice” (Jn 18:37).

What else can Pilate do, what else can the world decide, but to judge this man as a fool?

At least in these last days of human history, we have learned this much. Nothing explains itself. All systems of study, even mathematics, stand upon presumptions that they themselves cannot prove.

If the world does not explain itself and if its creator did enter its history, this savior would need to do so in a way that stood within the world and yet remained distinct from it. That contradiction suggests that God might indeed appear to the world as pure folly, a king with no power.