What do Catholics mean when we say the Eucharist is ‘the true body and blood’ of Christ? 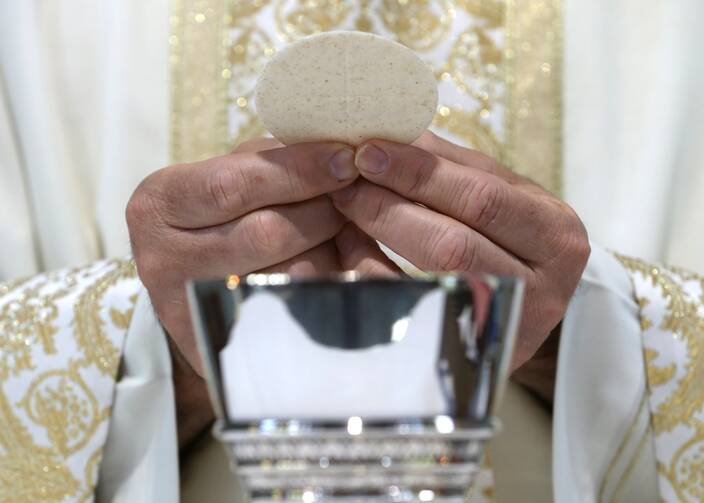 Catholicism has been sometimes described as a very materialistic religion. Why? Because Catholics take created reality seriously. Karl Rahner, S.J., once called Christians “the most sublime of materialists” because they “neither can nor should conceive of any ultimate fullness of the spirit and of reality without thinking too of matter enduring as well in a state of final perfection.” Far from being concerned with a narrow, spiritualized understanding of salvation, about “getting saved,” Catholics see grace everywhere, disclosed in nature, symbols, stories and persons.

Created reality is itself sacramental, revealing the presence of God, hinted at in a forest of metaphors and lurking in human love. Even if somewhat nervous about sexuality, Catholicism sees the body as holy. It honors the sacred heart of Jesus, his virgin mother Mary, her chaste spouse Joseph and even Jesus’ grandparents, Joachim and Anna, who have their own feast day, notwithstanding the origin of their names in one of the apocryphal gospels.

Created reality is itself sacramental, revealing the presence of God, hinted at in a forest of metaphors and lurking in human love.

Most of all, the church draws life from the body and blood of Jesus, present in the sacrament of the Eucharist. The Eucharist has long been the center of Catholic life, uniting his disciples as his body for the world (1 Cor 10:17). As Pope Emeritus Benedict XVI said, “The Church is the celebration of the Eucharist; the Eucharist is the Church; they do not simply stand side by side; they are one and the same.”

This reverence for the body, the eucharistic body of Jesus and his body the church, indeed the bodies of all those with whom Jesus identifies—not just the unborn, but the poor, the marginal, the immigrant, the hungry child, the abused woman, those who suffer from racial or sexual discrimination, those disenfranchised or denied their rights by the state, the prisoner on death row—each and every one of these grounds the Catholic concern for honoring bodily life.

Thus arises the concern of a number of Catholics regarding what appears to be the efforts of some bishops in the United States to exclude some Catholics in government from receiving the Eucharist on the basis of what is referred to as “eucharistic coherence.” Yet when questioned on this recently, Pope Francis replied, “I have never denied Communion to anyone,” adding that bishops should be “pastors,” not politicians.

Pope Francis has repeatedly made clear that abortion is not the only sin against the body of Christ. If we have learned anything from the Covid-19 pandemic, it is how closely we are related to each other and how devastating any refusal to care for one another by taking proper precautions, such as wearing masks and getting vaccinated, can be. It is not just “my body.”

But what is the body of Christ that we receive? The bishops are rightly concerned about a diminished understanding of Christ’s eucharistic presence, and about a reduced participation in the sacramental celebration. But the survey questions in the 2019 Pew Research Center survey most often referenced in discussions of belief in the real presence are less than adequately formulated. Its statements are ambiguous and can be differently understood.

As Nathan Mitchell has said so well, “The body of Christ offered to Christians in consecrated bread and wine is not something but someone.”

For example, the Pew study reports that 69 percent of Catholics surveyed say they believe that the bread and wine used in the Mass “are symbols of the body and blood of Jesus Christ.” That is not necessarily incorrect. But if they mean that they are mere symbols, without Christ’s real presence, that would replicate the mistake of the 11th-century theologian Berengarius (d. 1088) who seems to have taught that Christ was present in the bread and wine only as a sign, an approach that was seen as merely symbolic.

In response, the Council of Rome (1059) required him to confess that the bread and wine placed on the altar after consecration are “the true body and blood of our Lord Jesus Christ, and with the senses not only sacramentally but in truth are taken and broken by the hands of the priests and crushed by the teeth of the faithful.” Most of us would not use such literalist language. As David Power said, “Who today would care to state that communicants chew on the body of Christ?” Interestingly, Martin Luther used similar language. Rahner speaks of sacraments as “real symbols,” symbols that mediate or make present the reality they symbolize.

The Pew Forum survey also reports that 31 percent of Catholics say that they believe that “the bread and wine actually become the body and blood of Jesus.” But this also can be misinterpreted. It could represent an overly literal understanding of Christ’s presence. The eucharistic bread is not “literally” or “physically” Christ’s body, and the consecrated wine is not literally or physically his blood, as we so often read in articles about the controversy. When I ask students: When you receive only the eucharistic bread, are you receiving only the body of Christ? Many answer yes. This, of course, is incorrect.

The Fourth Lateran Council (1215) adopted the term transubstantiation to affirm that the substance of the bread and wine are changed in the Eucharist into the substance of Christ’s body and blood, while the appearances of the bread and wine remain the same. That term was then adopted after the Reformation by the 16th-century Council of Trent as an “appropriate” (aptissime) way of talking about what happens at the consecration of the Eucharist. But more to the point, the Council affirmed that in the Eucharist the whole Christ was present, “body and blood, soul and divinity.” In other words, what is present is not discrete flesh and blood, but the risen Jesus himself in his glorified humanity. The Catechism of the Catholic Church adopts this more appropriate language of Trent: In the Eucharist “the body and blood, together with the soul and divinity, of our Lord Jesus Christ and therefore, the whole Christ is truly, really, and substantially contained” (No. 1374).

It is not sufficient for contemporary Catholics simply to repeat the formulas of the past.

But “transubstantiation” is not the best place to start. It is a philosophical term, very different from the language of the New Testament that speaks of encountering the risen Jesus in the meal, in the bread and wine. Paul tells us that the cup of blessings in the Eucharist gives us a participation or communion (koinōnia) in the blood of Christ, and the bread broken gives us a participation or communion in the body of Christ (1 Cor 10:16). Luke speaks of the first disciples recognizing the risen Jesus in the breaking of the bread (Lk 24:31, 35). John’s language is more literal: Jesus says, “unless you eat the flesh of the Son of Man and drink his blood, you do not have life within you” (Jn 6:53), but the reference is still to a meal.

Does the risen Jesus literally have flesh and blood? How do we understand the nature of the risen body? It remains a mystery, one that fascinated many of the church fathers and medieval theologians. Tertullian (d. ca. 220) had a physical or material understanding of the resurrection; he taught that nothing would be lost, “neither genitals, nor intestines, nor eyelashes, nor toes,” while Gregory of Nyssa (d. ca. 394) said the body would rise without age or sex. Augustine held that men would have beards because he felt that beauty was a property of the risen body. In his famous Sentences, Peter Lombard (d. 1160) pondered the age, height and sex of those raised, whether they would have fingernails and hair, and how the bodies of those in hell could burn without being consumed.

St. Paul struggled to understand Christ’s glorified humanity in 1 Corinthians, but his language breaks down when he tries to describe it. He calls it a spiritual body, speaking of the risen Jesus—“the last Adam”—as a life-giving spirit (1 Cor 15:45). Perhaps the later development of the doctrine of the Trinity might provide insight here. The doctrine of the Trinity is an articulation of what is revealed of God: Father, Son/Word and Spirit. On that basis, reflection turns to what is often thought of as the “inner” or eternal life of God: three persons, diverse in mission, one in being. When we receive the Eucharist, the risen Christ, Son and Word of the Father, no longer bound by space and time, comes to dwell in us, uniting us with himself and with one another in his body, the church. It is not sufficient for contemporary Catholics simply to repeat the formulas of the past.

In receiving holy Communion, we truly encounter the risen Christ, who gives himself to us as food and drink, his “body and blood.” As Nathan Mitchell has said so well, “The body of Christ offered to Christians in consecrated bread and wine is not something but someone.”