Love does not calculate. It just loves. 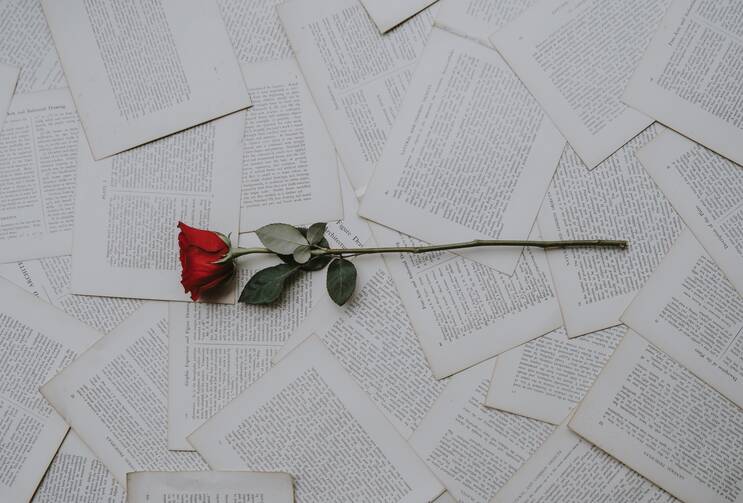 A Reflection for the Thirty-second Sunday in Ordinary Time

The Gospel is not a program of action. It has nothing to do with percentages. So save your time. Jesus does not draw attention to the widow and her “two small coins” because he wants you to do some good work or to donate a certain percentage of your resources. You should do both, but that is not the lesson the Lord is teaching here.

No, any instructor can tell you what is happening here. Jesus suddenly sees the example that makes his point, makes it more effectively than anything he might say. Love does not calculate. Love just loves.

Jesus sat down opposite the treasury
and observed how the crowd put money into the treasury.
Many rich people put in large sums.
A poor widow also came and put in two small coins worth a few cents (Mk 12:41-42).

Here is another version of the same story. It is from St. Thérèse of Lisieux. There is no money in this tale, so we are not tempted to wonder about percentages.

At the command of her religious superiors, Thérèse kept a journal, describing her vocation and her life in Carmel. This became known as her “little way,” the most nonsensical sobriquet ever assigned to a saint’s teaching. There is nothing little about Thérèse’s way, if by “little” you mean easy or cheap. Remember what our Lord said of the widow.

For they have all contributed from their surplus wealth,
but she, from her poverty, has contributed all she had,
her whole livelihood (Mk 12:44).

Listen to Thérèse, and learn what it means to give all that one has. Here she is writing to her prioress, Mother Marie de Gonzague.

Dear Mother, I have already told you that my last means of not being defeated in combats is desertion; I was already using this means during my novitiate, and it always succeeded perfectly with me. I wish, Mother, to give you an example which I believe will make you smile. During one of your bronchial attacks, I came to your cell very quietly one morning to return the keys of the Communion grating since I was sacristan. I wasn’t too displeased at having this opportunity to see you; I was very much pleased, but I didn’t dare to show it. A sister, animated with a holy zeal, and one who loved me very much, believed I was going to awaken you when she saw me entering your quarters; she wanted to take the keys from me.

Never turn Thérèse into a sweet simpleton. Here she diagnoses her own desire for face time with her superior while charitably assessing the intentions of her companion. Thérèse identifies how deeply her dutiful actions were rooted in her own sense of self.

I was too stubborn to give them to her and to cede my rights. As politely as I could, I told her that it was my duty to return the keys. I understand now that it would have been more perfect to cede to this Sister, young, it is true, but still older than I. I did not understand it at the time, and as I wanted absolutely to enter in spite of the fact that she was pushing the door to prevent me, very soon the thing we feared most happened: the racket we were making made you open your eyes. Then, Mother, everything tumbled upon me. The poor Sister whom I had resisted began to deliver a whole discourse, the gist of which was: It’s Sister Thérèse of the Child Jesus who made the noise; my God, how disagreeable she is, etc.

This is where so many of us could not keep from calculating. We would want to defend ourselves. Better to donate a lot of money than to see one’s valuation in the eyes of others diminish. But love does not calculate. Love just loves.

The Gospel is not a program of action, though if you embrace it as a way of life it will demand so many actions of you.

Thérèse became a religious because she had understood the Gospel. It is not a program of action. It is not about percentages. It is about falling in love. Thérèse had entered Carmel because she loved Jesus: the man, the teacher, her Lord, her savior. Only a romantic, someone wildly in love, could do what she did next.

I, who felt just the contrary, had a great desire to defend myself. Happily, there came a bright idea into my mind, and I told myself that if I began to justify myself I would not be able to retain my peace of soul. I felt, too, that I did not have enough virtue to permit myself to be accused without saying a word. My last plank of salvation was in flight. No sooner thought than done. I left without fuss, allowing the Sister to continue her discourse which resembled the imprecations of Camillus against the city of Rome.

Thérèse wanted to offer even more to her love. Would that she could have stood there silently. But she gave enough by running away, casting aside a natural desire to be understood, to look good in the eyes of others.

My heart was beating so rapidly that it was impossible for me to go far, and I sat down on the stairs in order to savor the fruits of my victory. There was no bravery there, Mother; however, I believe it was much better for me not to expose myself to combat when there was certain defeat facing me.