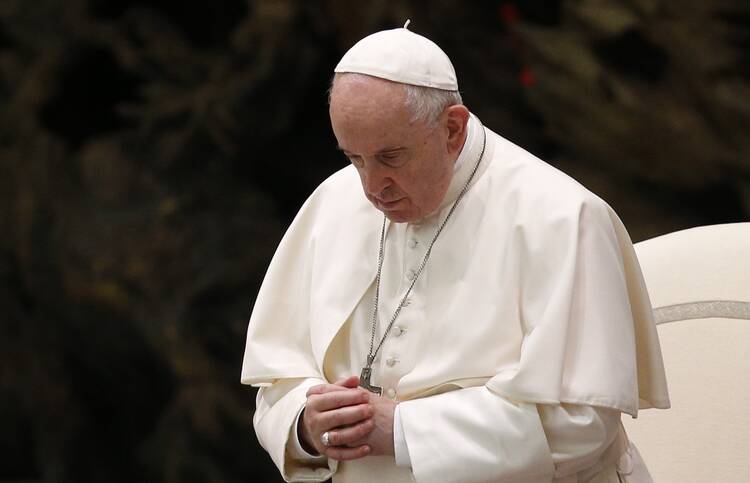 Pope Francis is pictured during his general audience in the Paul VI hall at the Vatican Oct. 27, 2021. (CNS photo/Paul Haring)

VATICAN CITY (AP) — Pope Francis has agreed to visit Canada to help ongoing efforts at reconciliation with Indigenous peoples following shocking revelations of the Catholic church’s role in the abuse and deaths of thousands of native children, the Vatican said on Wednesday.

In a brief statement, the Holy See’s press office said that the Canadian Conference of Catholic Bishops has invited the pope to make an apostolic journey to Canada “also in the context of the long-standing pastoral process of reconciliation with Indigenous peoples.” The statement didn’t cite why the reconciliation process was needed.

In return, Francis “has indicated his willingness to visit the country on a date to be settled in due course,” the statement said.

Pope Francis has agreed to visit Canada to help ongoing efforts at reconciliation with Indigenous peoples.

The pilgrimage could be the occasion for a papal apology that has been demanded by many in Canada.

Given the time usually required to organize an overseas papal visit, it appeared unlikely such a pilgrimage could happen this year.

Francis had already agreed to meet in December with Indigenous survivors of Canada’s notorious residential schools amid calls for a papal apology for the Catholic Church’s role. At that time, the bishops conference said the pontiff had invited the delegations to the Vatican and would meet separately with three groups — First Nations, Metis and Inuit — during their Dec. 17-20 visit. The pope will then preside over a final audience with all three groups Dec. 20, according to the bishops group.

It wasn’t immediately clear if that Vatican meeting would go forward or if a papal pilgrimage might preclude it.

The pilgrimage could be the occasion for a papal apology that has been demanded by many in Canada.

Earlier this year, investigators in Canada using ground-penetrating radar have reported finding hundreds of unmarked graves at the sites of two residential schools for Indigenous children. The discoveries — more than 600 graves in one school, 215 bodies in another — revived calls, including from Canadian Prime Minister Justin Trudeau, for the pope to make a formal apology.

From the 19th century until the 1970s, more than 150,000 Indigenous children were forced to attend state-funded Christian boarding schools in a campaign to assimilate them into Canadian society. Thousands of children died there of disease and other causes; others never returned to their families.

Nearly three-quarters of the 130 residential schools were run by Roman Catholic missionary congregations. Others were run by the Presbyterian, Anglican and the United Church of Canada, which today is the largest Protestant denomination in the country.

Frances D'Emilio - Associated Press
Show Comments ()
Join the conversation: Login or create an account
Before you can comment, you need to update your profile to include your first and last name, as required in our comments policy. Then reload this page and you'll be set up for commenting. Update your profile