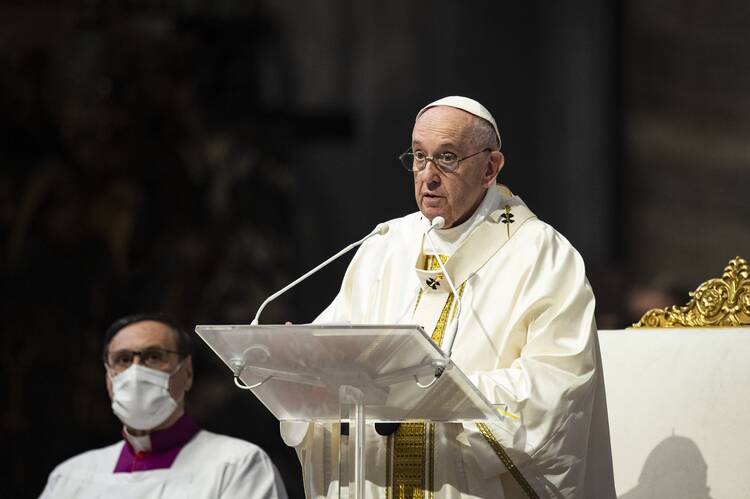 Pope Francis delivers the homily as he celebrates the opening Mass of the plenary assembly of the Council of European Bishops' Conferences on Sept. 23, 2021. (CNS photo/Cristian Gennari, pool)

VATICAN CITY (CNS) — Pope Francis said the Second Vatican Council so shaped his theological and pastoral vision that perhaps he has not been as explicit as he should have been in highlighting those ties, especially when it comes to his contributions to Catholic social teaching.

“In the history of Latin America in which I was immersed, first as a young Jesuit student and then in the exercise of my ministry, we breathed an ecclesial climate that enthusiastically absorbed and made its own the theological, ecclesial and spiritual intuitions of the council and inculturated and implemented them,” he wrote in the preface to a new book.

“The council became the horizon of our belief, our language and our praxis, that is, it soon became our ecclesial and pastoral ecosystem,” he said. “Quite simply, the council had entered into our way of being Christians and of being church, and throughout my life, my intuitions, perceptions and spirituality were simply generated by the suggestions of the doctrine of Vatican II.”

“Throughout my life, my intuitions, perceptions and spirituality were simply generated by the suggestions of the doctrine of Vatican II.”

Pope Francis’ preface to “Fraternity: Sign of the Times” was released Sept. 28 by Vatican News. The book, to be released in Italian Sept. 30 by the Vatican publishing house, is written by Cardinal Michael Czerny and Father Christian Barone, an Italian theologian.

The English translation, “Siblings All, Sign of the Times: The Social Teaching of Pope Francis,” will be published by Orbis Books in 2022.

The book presents a theological reading of the pope’s encyclical, “Fratelli Tutti, on Fraternity and Social Friendship,” but also on his social teaching as a whole, emphasizing its continuity with papal social teaching and, especially, the vision of the Second Vatican Council of the Catholic Church in dialogue with and ministering to the world.

Pope Francis said that now, more than 50 years after the council concluded its work, “it is necessary to make more explicit the key concepts of Vatican Council II, the foundations of its arguments, its theological and pastoral horizon, the arguments and the method it used.”

The council affirmed the vision of “a church that is open, in dialogue with the world,” he said. And that dialogue has made clear that there is a need “for a church that places herself at the service of humanity, taking care of creation and proclaiming and realizing a new universal fraternity, in which human relationships are healed of selfishness and violence and are founded on mutual love, acceptance and solidarity.”

Pope Francis cautioned that the Christian message can never be reduced to a social program nor can it be so separated from real life that it focuses only on the spiritual and the hereafter.

At the same time, Pope Francis cautioned that the Christian message can never be reduced to a social program nor can it be so separated from real life that it focuses only on the spiritual and the hereafter.

“The heart of the Gospel is the proclamation of the kingdom of God, which is the person of Jesus—Emmanuel and God with us,” the pope wrote. “In him, in fact, God definitively manifests his plan of love for humanity, establishing his lordship over creatures and inserting into human history the seed of divine life, which transforms it from within.”

The kingdom of God, he said, “is a living, dynamic reality that invites us to conversion and asks our faith to come out of the static nature of an individual religiosity or one reduced to legalism, to be instead a restless and continuous search for the Lord and his word, which every day calls us to collaborate in God’s work in the different situations of life and society.”

While the kingdom of God will be fully established only at the end of time, Jesus already began building it and he continues to do so, asking each Christian to be part of the effort, the pope said. “Each of us can contribute to bringing about the work of God’s kingdom in the world, opening up spaces of salvation and liberation, sowing hope, challenging the deadly logic of selfishness with evangelical fraternity, committing ourselves to tenderness and solidarity in favor of our neighbors, especially the poorest.”