The Problem with Mother Angelica and EWTN (from 1995) 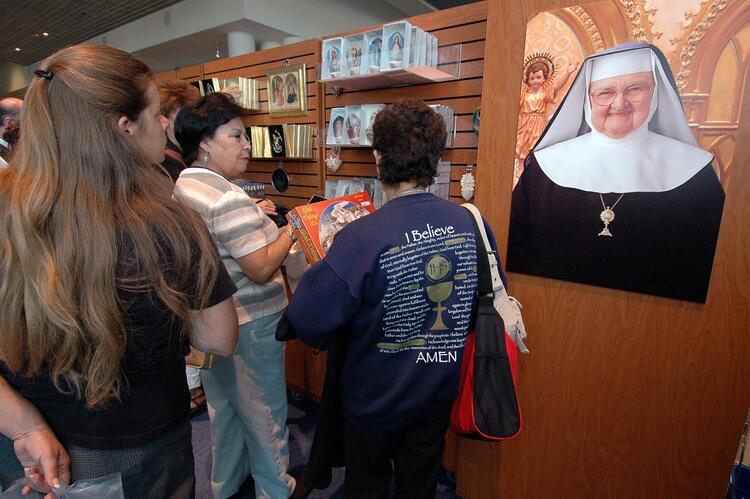 The following article appeared in the Aug. 12, 1995 issue of America. Click here to find America’s other coverage of EWTN.

I run the risk, I know, of getting into trouble if I write anything about Mother Angelica, the founder and guiding spirit of the popular Eternal Word Television Network (EWTN). Last October, in a piece about the ecumenical Faith & Values network. I mentioned that the network often found itself vying for space with Mother Angelica. whom I characterized as “con­servative.” The bulk of the article focused on scrappy little F&V, with only about 100 words on Mother. But from the volume of mail we received you’d have thought we had published a full-scale, 20 page attack on Mother Angelica. She has, it should be noted, many fans.

Anyway, the time has now come to talk about Mother Angelica. This is, after all, a television column, and EWTN is the nation’s largest religious cable station, reaching 40 million homes in the United States and more than 20 countries overseas. It broadcasts 24 hours a day. Consider this: For some Americans, she represents the Catholic Church—not the local bishop, or the U.S. Bishops’ Conference, or the latest papal encyclical, or America or Common­weal or the St. Anthony Messenger. Mother Angelica is what many people think of when they think of the American Catholic Church.

Consider this: For some Americans, Mother Angelica represents the Catholic Church—not the local bishop, or the U.S. Bishops’ Conference or the latest papal encyclical.

While you’re digesting that last obser­vation, let me now praise Mother Angel­ica. And when I speak of “Mother Angelica,” I am talking about the entire EWTN phenomenon: the network, the shows, the religious order, the Masses, the whole gestalt. Now the praise: Here, gentle readers. is a woman who loves her church and is devoted to God. It might not be the kind of church preferred by you St.-Louis Jesuit-singing, Matthew-Fox-reading. inclusive-language, empower-the-laity­ types, but she’s devoted to her church nonetheless.

Second, Mother provides a service to many television-watching Catholics. Admit it: Are there many other nationwide cable shows that broadcast the Mass four times a day (and in Spanish on Sundays)? Now it may not be your kind of Mass, but Christ is there, isn’t he?

Third, unlike many other cable religion net­works, Mother offers a wide variety of programming. Last month she televised the proceedings of the U.S. Bishops’ Conference meeting. On most weekdays, Bob and Penny Lord, the affably pious hosts of “The Miracles of the Euch­arist,” function as spiri­tual tour guides, leading viewers to such places as the home of Blessed Faustina in Poland. There is also a liberal sprinkling of not-so-liberal scholars expounding on Scripture, though most of the exegesis consists of a priest standing behind a podium reading directly from the Bible. (“And Mathew goes on to say ....”) Again as a Jesuit friend likes to say: “For people who like that sort of thing, that’s the sort of thing they like.”

Finally, for shut-ins, Mother Angelica is un­doubtedly a godsend. One Jesuit told me that his mother adores (the right word) what I will call EWTN’s “Rosary Shows,” one of which features a young girl standing on a misty hillside reciting the rosary for a half hour.

Mother Angelica, devout and well-inten­tioned as she may be, has some big problems.

There. That wasn’t so bad, was it? Now, for the second part of our story: Mother Angelica, devout and well-inten­tioned as she may be, has some big problems.

For one thing, Mother seems to live in a world of black and white. There is good and bad. There is right and wrong.

Well, that’s true. There is good and bad and right and wrong. Unfortunately, there are some other things in the middle, which is where most Catholics tend to live.

“Thank God for the new catechism,” she said as she thumped the book in her lap, because it will finally put an end to all of those bothersome theologians who dare to criticize the magisterium. Now, I can think of a number of reasons to thank God for the catechism, but keeping rambunctious theologians in their place is not one of them. So much for theologians. (You will recall that St. Thomas Aquinas, St. Bonaventure and St. Augustine were members of this unruly club.) So much for the continuing development of theology, and, more to the point. so much for the Holy Spirit.

Mother also seems to be—and this is about as gently as I can say this—­more comfortable with the past than with the present.

Mother also seems to be—and this is about as gently as I can say this—­more comfortable with the past than with the present.

I recently spent two years working overseas. As EWTN does not broadcast in Kenya (where it would undoubtedly be quite popular) I did not watch Mother Angelica. On my return I flipped on her show one afternoon. Could it be? Her habit had become—mirabile dictu—more conservative than before Indeed, like most of the sisters who appear on EWTN, Mother Angelica favors the full habit. Priests and brothers for their part invariably sport clerical garb (with snowy white French cuffs) or, better yet, cassocks

Now, there’s certainly nothing wrong with veils and collars and cassocks, but I wonder if these are prerequisites for appearing on the network. I’ve met quite a few committed, dedicated sisters in my day. Most of whom choose to wear street clothes. So where on EWTN are all those nice, non-habit wearing sisters?

In other words, where is the rest of the church that Mother Angelica says she loves?

And those Masses. What’s the story? Did Vatican II happen? Was there another council that I missed that revoked the litur­gical renewal of Vatican II? It is under­standable to pine for the good old days, but these days aren’t entirely bad. It must prompt Catholics to wonder why their own parishes aren’t doing the same as what they see on EWTN. Why can’t our parish be more like hers? Hey, Father. where are our subdeacons?

It is also evident that, like many other American Catholics, Mother Angelica is angry. She’s angry about the permissiveness of our society, about vio­lence, declining sexual mores. the destruction of the family—all good things to lament.

She seems to reserve her greatest anger for her own church: theolo­gians who lead us astray, disobedient laypeople, liberal priests and sisters who favor women clergy, married priests, inclusive language....

She seems, however, to reserve her greatest anger for her own church: theolo­gians who lead us astray, disobedient laypeople, liberal priests and sisters who favor women clergy, married priests, inclusive language.... You name it. And she lets them have it whenever she can.

Indeed, the level of vitriol she directs towards some elements of the church would be called Catholic-bashing if it came from other quarters.

Fair enough. Everyone’s angry about something in the church. It’s too liberal: it’s not liberal enough. There aren’t any women priests; there are too many women around the altar. There’s not enough inclusive lan­guage; there’s too much, and it’s watering down the beauty of the liturgy. Take your pick. But when your anger animates your ministry, then you’re in trouble.

This is what bothers me most about Mother Angelica. Of course this is a com­pletely subjective analysis. But after all, her ministry is television, and with television the image—not the intention—is the prod­uct. The medium is the ministry, as it were. And the image here speaks volumes.

Pope Francis responds to attacks from EWTN, other church critics: ‘They are the work of the devil.’
Gerard O’Connell

For all her devotion to the church, she doesn’t seem to like it very much. I mean the whole church—the big, contentious, worldwide, supremely messy, post-Vatican II church that struggles to find its way in the modern world.

Perhaps even this can be forgiven. Maybe Mother Angelica feels she’s doing the church a service with her righteous zeal, like Jesus in the temple. But here’s the problem: Her anger is particularly harmful because it is this picture of the church—bitter, intransigent, defensive—that is a dominant image of the church on American television, in large part thanks to her influential network.

The Catholic Church, as projected by Mother Angelica, is one, holy, catholic and apostolic. It is also extremely angry.

And this particular fruit of her television ministry is a signal disservice to the American church.