From 1966: Without ordination, can women be equal in the church? 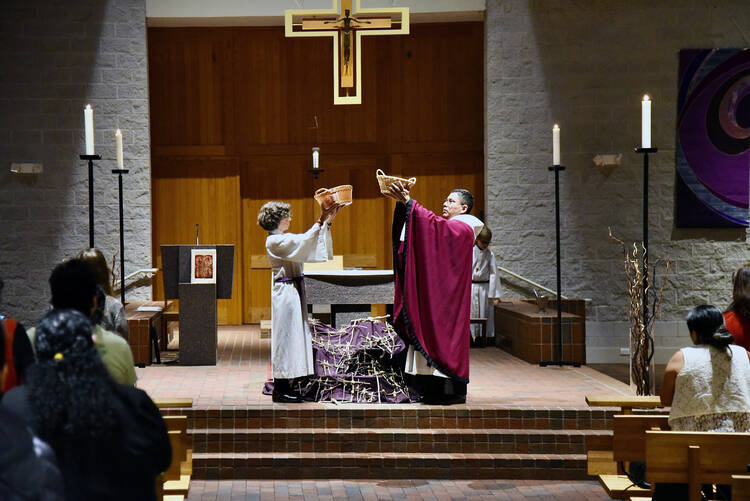 Casey Stanton, left, and the Rev. Mario Gomez, OFM, raise up the prayers people have written down at the culmination of a 3-night parish retreat at Immaculate Conception Parish in Durham, North Carolina, in March 2020. Photo by John Witchger

In the July 23, 1966, issue of America, the cover story featured an essay from a prominent female Catholic philosopher, Mary-Angela Harper, on the nature of womanhood and the question of women’s ordination. “What, then, is my reaction to the demand for full equality among men and women?” Mrs. Harper asked. “If by equality one means that there should be a full measure of recognition in every order for the contribution that is uniquely feminine, I most enthusiastically approve. But if by equality one refers to some sort of absolute and universal fraternity in which women would participate in every masculine enterprise, in order to remove themselves finally and forever from subordination to masculine ‘domination’—if equality means sacrificing her woman’s femininity then I say: ‘Thanks, but no thanks!’” Below is a curated selection of some of the letters Ms. Harper’s view evoked that were printed in the Aug. 27, 1966 issue.

I was happily surprised by the title of your cover story “Woman’s Role in the Church.” I’ve awaited AMERICA’s treatment of this urgent question for a year. The article, how­ever, was much less than what I expected. It was not a response, but a reflex, the well oiled defense mechanism of the party line—“not equal, but different,” “man is the head; woman, the heart,” etc., etc. In a more discreet phraseology, of course. I’m not denying the “equal, but different” truism. No one can deny that a woman is different from a man, not even the so-called feminists. The question that Mrs. Harper failed to answer is whether a woman in the Church is not only different, but less than a man, when she is barred from the highest Christian commitment, the priesthood, only by the fact of her sex. Doesn’t such an ex­clusion suggest an inadequacy of that sex?

The author cannot imagine a woman wanting anything else than a “feminine” role and makes bold to wonder “what woman in her inmost heart would ever exchange the incontestable measure of influence and power she wields as a beloved, a wife and/or a mother [Is there no place for sisters, for single women?] for the ‘neutral’ intellectual or social situation in which she is one among equals.”

Yes, Mrs. Harper, there are women who would exchange this power, not to approach your “altar of equality,” but rather to go to the altar of God.

The Christian Church, which loudly proclaims how wonderful it has been to women, has in fact always been last, not first, to better the role of women. Women in most of the world are still denied education, for example, and in many European countries they are still denied access to theology, the study of God. Only male theologians, it seems, are entitled to know anything about God. I speak here of so-called Catholic countries. Recently I was informed by a woman friend, a graduate of Louvain (a Catholic university whose faculty has been busy downgrading the idea of women priests), that this institution opened its doors to Catholic women only because so many were going to secular universities riddled with Freemasonry. There was nowhere else they could get an education...because they were women.

Have we women missed the point of our status in the Church? Do we have to be ordained priests to fulfill our role? What about the priesthood of the laity? What better way to participate in the function of the Church than to serve in whatever mission our state in life carries with it? In the era of the Secular City, can’t we as unordained women carry out our priesthood where we are, rather than waste valuable time fighting our way to the pulpit?

I strongly disagree with [Mrs. Harper’s] supposition that all women who would like to become priests are seeking “equality” or, what is worse, “power.”

I don’t know what it means to be “equal” to men, or to any other person. And I couldn’t care less about power—even the tender “feminine” kind that Mrs. Harper cherishes. But I think the priesthood in­volves a unique service to the people of God, which should not be closed off to women. I see no reason why ordination would have to involve the rejection of one’s fem­ininity. Quite the contrary. I think a woman could bring much to the vocation and grow much in the living of it.