Would Francis have become pope if 9/11 hadn’t happened? 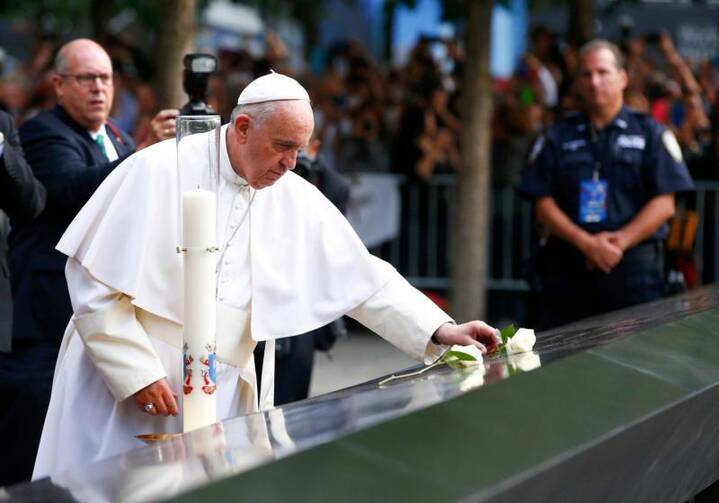 Is there a connection between the horrific attacks of Sept. 11, 2001, and the election of Pope Francis 12 years later? As I argue in my book The Election of Pope Francis, “the 9/11 attack not only changed world history but also impacted the future of the Catholic Church.” Why? Because it led to the then-archbishop of Buenos Aires rising to prominence in the college of cardinals that would one day elect him as pope.

To understand this, it may be worth recalling that Pope John Paul II had nominated Jorge Mario Bergoglio, S.J., first as auxiliary bishop of Buenos Aires in 1992 and then as coadjutor bishop in 1997. The Jesuit took over as archbishop in February 1998 upon the death of his predecessor, and the pope made him a cardinal on Feb. 21, 2001.

The 9/11 attack not only changed world history but also impacted the future of the Catholic Church.

The Polish pope had already called a synod of bishops to discuss the theme of “The Bishop: Servant of the Gospel of Jesus Christ for the Hope of the World.” The synod was scheduled to be held from Sept. 30 to Oct. 27, 2001. He had appointed Cardinal Edward Egan, the archbishop of New York, as general rapporteur for the synod and Cardinal Bergoglio as the adjunct-general rapporteur.

The synod opened on Sept. 30, and Cardinal Egan gave the opening presentation on Oct. 1. Three days later, however, he had to return to New York. The priests of the archdiocese were unhappy at his absence, given the turmoil in the city in the aftermath of the Sept. 11 attacks and the fact that the U.S. was preparing to go to war against Afghanistan (the war started on Oct. 7). After consulting senior Vatican officials and speaking with the pope, Cardinal Egan returned to New York, and the Argentine cardinal replaced him in the key role of general rapporteur.

As I wrote in my book, “While Egan had already given the initial keynote presentation, Bergoglio had to do everything else with the help of a team of theologians. His task involved synthesizing the interventions of the participants, presenting them in a way that would assist the synod fathers in their group discussions, and then coordinating the presentation of the resolutions from those discussions. It was his sterling performance on this occasion that suddenly caused the Argentinean archbishop to be seen by many cardinals as a plausible successor to John Paul II.”

I recalled that “[a]t the end of each synod, participants elect a twelve-member council to oversee the concluding work of that synod and to prepare for the next one. Bergoglio came in at the top of the list with the most votes because of his outstanding work at the synod.” This was the clearest signal yet of his high standing among the cardinals and bishops present.

Jorge Bergoglio was not listed among the frontrunners to succeed Benedict XVI because of his age.

I wrote that “immediately after the conclusion of the synod, Cardinal Cormac Murphy-O’Connor told me, ‘You should watch that man!’ It was clear that he had put the archbishop of Buenos Aires on his short list of papabile to succeed the Polish pope.” So too, I learned, had many other cardinals in the Roman Curia and beyond. From October 2001 onward, Bergoglio remained on the radar screen of the college of cardinals in the lead-up to the 2005 conclave.

His predecessor in Buenos Aires, Cardinal Antonio Quarracino, used to refer to Bergoglio as “the little saint.” As I recount in the book, other cardinals too came to see him “as a man of prayer, a humble, courageous pastor with a simple lifestyle, a powerful preacher who shuns the limelight, has great love for the poor, and is a frequent visitor to the shantytowns.” They learned that he “was never afraid to speak truth to power. He has good political antennae, and he has shown he is able to govern.”

He was the only serious challenger to Cardinal Joseph Ratzinger at the 2005 conclave, and sources confirmed that he had received sufficient votes on the third ballot to block the election of Cardinal Ratzinger; but for the unity of the church, as I learned later, he decided to pull back. The conclave elected Cardinal Ratzinger, who took the name Benedict XVI.

Cardinal Bergoglio returned to Buenos Aires, much relieved, and continued his pioneering style of pastoral ministry. He went on to play a central role in the plenary assembly of the Conference of Latin American Bishops (CELAM) at Aparecida, Brazil, in September 2007, where he was elected editor in chief of its final document. He gained 112 out of the 130 votes cast for that key role and emerged as the leading figure of the Latin American church, a position he still held when Benedict XVI resigned and a new conclave was convened for March of 2013.

In spite of this impressive biography, as I wrote, “Bergoglio was not listed among the frontrunners to succeed Benedict because of his age. ‘He would be good, but he may be too old,’ a cardinal who esteemed him told me, expressing a widespread view.” Bergoglio himself was of the same opinion, as he revealed in a recent interview with a Spanish radio station. Indeed, by the time Benedict XVI resigned, Bergoglio was not atop the list of most cardinals but, as my account of the conclave tells, he returned to consideration with a powerful speech on the Saturday before they went into conclave. That speech and further reflection by the cardinal electors about the other contenders led to his election on March 13.

Though the tragedy of Sept. 11, 2001 is rightly remembered as the occasion of great loss of life and the inciting incident for two decades of strife, its historical reverberations were found in numerous other areas worldwide, including being a factor that led to the election of Pope Francis a dozen years later.