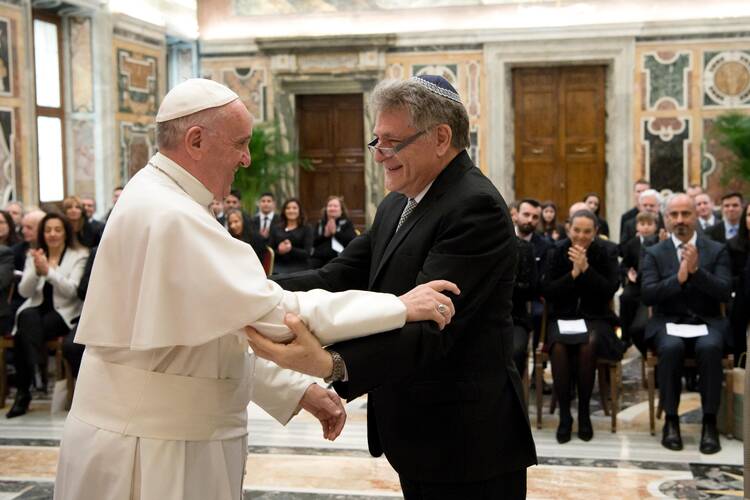 Pope Francis greets Rabbi Abraham Skorka during a meeting with an interreligious group of scholars at the Vatican Feb. 23. Rabbi Skorka, rector of the Latin American Rabbinical Seminary and a longtime friend of the pope, led the group in presenting an illustrated copy of the Torah to the pope. (CNS photo/L'Osservatore Romano)

The danger of speaking in public: People will hear you. And take you seriously. And remember what you said.

This past August, Pope Francis made a statement that some have characterized as causing the greatest tension in the relationship between the church and the Jewish people since the beginning of his pontificate. The pope offered a reflection on Paul’s teaching about “Torah,” a word often—incorrectly—translated as law. Early in his remarks, the pope said, “God offered them [the Jewish people] the Torah, the Law, so they could understand his will and live in justice. We have to think that at that time, a Law like this was necessary, it was a tremendous gift that God gave his people.”

The catechesis that Pope Francis offered in August is in direct and explicit contradiction to the idea that supersessionism has itself been superseded.

To that point there was nothing the pope said that could be considered offensive. However, later in his teaching he asserted, “The Law, however, does not give life, it does not offer the fulfillment of the promise because it is not capable of being able to fulfill it. The Law is a journey, a journey that leads toward an encounter… Those who seek life need to look to the promise and to its fulfillment in Christ.”

When Pope Francis’ remarks became known, the Chief Rabbinate of Israel felt called on to write the Vatican Commission on Religious Relations with the Jews asking for clarification. The International Jewish Committee on Interreligious Consultations, which is designated as the Jewish world’s official interlocutor with the Vatican, quickly sent a letter expressing grave concern about the pope’s words. Jews engaged in dialogue with the church expressed profound, personal dismay.

Catholics might well wonder what could be so distressing about a statement made in the course of a papal audience. After all, the pope’s catechesis does not have the weight of an official church document. It does not chart some new course in the relationship of the Catholic Church and the world of Jews and Judaism. Why would it be considered by Jews to be of such significance and consequence?

That the pope could embrace the notion that Torah is just a way-station to a fuller, higher truth is painful to Jewish ears.

Certainly it must be recognized that those recent comments are in stark contrast to everything else Pope Francis has said since becoming pope, and in contrast to his demeanor in his many encounters with Jewish leaders. Upon his election, Jews took great encouragement in his long and intimate association with Rabbi Abraham Skorka, with whom he had been friends in Argentina, and with whom he had co-written a book of interfaith reflections. In the years since, the pope has greeted Jewish delegations with real warmth and reflected on the church’s relations with the Jewish people in sentiments such as, “a Christian cannot be an anti-Semite; we share the same roots.”

And the pope matched his words with actions. In May 2014, he visited the State of Israel and had extensive conversations with the then chief rabbis of the country, visiting places sacred to Jews as well as those sacred to Christians. In January 2016, he made a visit to the Great Synagogue in Rome where he said, “in the Jewish-Christian dialogue there is a unique and particular bond, by virtue of the Jewish roots of Christianity: Jews and Christians must therefore consider themselves brothers, united in the same God and by a rich common spiritual patrimony on which to build and to continue building the future.” In November 2019, at a general audience in the Vatican, the pope departed from his prepared remarks to assert, “I would like to make a separate note. The Jewish people have suffered so much in history, they have been chased away, they too have been persecuted…In the last century we saw so many brutalities against the Jewish people, and we were all convinced that this was over. But today the habit of persecuting the Jews, brothers and sisters, is here reborn. This is neither human nor Christian…The Jews are our brothers and should not be persecuted.”

Then, in September 2015, while on a visit to Philadelphia, the pope made an unscheduled visit to Saint Joseph University to bless a newly installed statue called “Synagoga and Ecclesia in Our Time.” The statue itself is a commentary on the many medieval statues—including a pair found in the entrance to Cathedral of Notre Dame in Paris—depicting a young and triumphant Ecclesia (the church) in contrast to an old, broken and blinded embodiment of the Jewish people. In the statue that the pope blessed, the two sit as equals, one holding a copy of the Torah, the other a book. (See photo below.) Most strikingly in the Philadelphia statue, the two appear to be studying together—learning together and informing one another. As then Vatican spokesman Federico Lombardi, S.J., said at the time, “This statue is exactly a demonstration of two sisters of the same dignity, the church and the synagogue.”

The pope’s recent remarks stood in stark contrast to these previous efforts to strengthen the relationship between Catholics and our Jewish “brothers.”

The pope’s recent remarks stood in stark contrast to these previous efforts to strengthen the relationship between Catholics and our Jewish “brothers.” In fact, the statue that he blessed in Philadelphia embodies the concerns about the words Pope Francis spoke this August. The medieval versions of synagoga and ecclesia were a physical representation of what has come to be called supersessionism or replacement theology. That idea holds that the religion of the Jews, that Torah, is antiquated and outmoded. It has been replaced in God’s favor and design by a “new Israel”—the church triumphant. Replacement theology is the face of the church that the Jewish people have been familiar with for the past 2,000 years. It leaves no room for Jews and Judaism in God’s plans for the world. They have been, literally, replaced. And, of course, the sense of being replaced makes a people feel vulnerable and endangered in a hostile world.

This statue represents a radically new idea. It speaks to a notion of mutuality and respect. Church and synagogue each representing truth to their adherents. Neither higher or larger or healthier than the other—studying together. The Torah embraced by Synagoga is accorded the same respect as the book held by Ecclesia. That new statue is a representation of mutual respect. It is the embodiment of hope.

When the Second Vatican Council issued the statement “Nostra Aetate” in 1965, the document addressed the issue of deicide and the hatred of Jews that that charge incited. The document itself does not include the word supersessionism or refer to the concept. When “Nostra Aetate” was issued, many Jews greeted it with suspicion: “Perhaps the church is saying this, but does not mean it.” Others in the Jewish community took the assurances of the church on faith. They acted on the assumption that the document also implied a rejection of the millennia old idea of replacement theology.

There is still much work to be done until the hopes engendered by “Nostra Aetate” bloom into the fullness of their potential.

Indeed, many Catholic leaders and thinkers made the same assumption. It would be articulated more explicitly in documents issued by various bishops’ conferences. It was the implicit assumption of members of the Jewish community as they engaged in dialogue with representatives of the church. It is that hope which was shared by all those present when the pope blessed the statue in Philadelphia, and by the communities of faith that they represented.

The catechesis that Pope Francis offered in August is in direct and explicit contradiction to the idea that supersessionism has itself been superseded. In its way it echoes the old teaching of contempt. It speaks in the too-familiar language of disdain for Torah, dismissive of that which is most precious to his Jewish interlocutors. And it lends credence to those voices in the Jewish community who were unpersuaded by “Nostra Aetate.” It suggests that despite all that has flowed from Vatican II, all the meetings, all the statements and all the progress, the notion of full reciprocity has still not been fully embraced at the highest levels of the church. It suggests that despite “Nostra Aetate” and all the understanding that has flowed from it, somewhere in the innermost thinking of the church the idea of replacement theology still dominates.

That the pope could embrace the notion that Torah is just a way-station to a fuller, higher truth is painful to Jewish ears. Whether it was said with strategic intentionality, or just blurted out inadvertently, it is a testimony to the fact that for all that has been achieved since 1965, and despite all the hopes held by many—Jews and Catholics alike—there is still much work to be done until the hopes engendered by “Nostra Aetate,” until the implicit message of that document, bloom into the fullness of their potential. For Jews those words carry great weight; and they will, undoubtedly, be the subject of much conversation with the church in the time ahead. They raise the question whether the church is truly prepared to accept the faith of Jews as a spiritual equal. That is an issue of the greatest significance, indeed.

Rabbi Daniel F. Polish is the author of Bringing The Psalms to Life, Keeping Faith with the Psalms and Talking About God, all published by Jewish Lights Publishing. In October, 2008 Rabbi Polish was part of a delegation of Jewish leaders who met with Pope Benedict XVI to discuss current issues between the Jewish community and the Catholic Church. In 2013, he participated in similar conversations with Pope Francis.