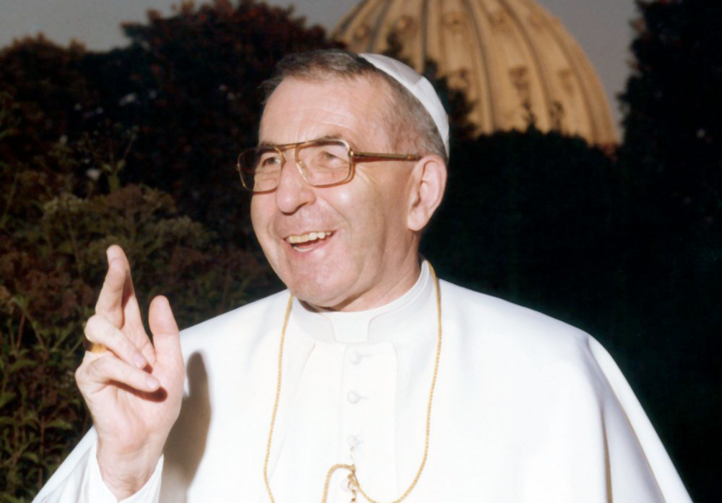 Pope John Paul I is pictured at the Vatican in 1978 during his short time as pontiff. (CNS file photo)

The process for the cause of the beatification of the man Italians called “the smiling pope” has now reached the final stage, according to the vice postulator for his cause, Stefania Falasca, an Italian journalist and his biographer. She announced this in an article in today’s edition of Avvenire, the daily paper of the Italian bishops’ conference.

John Paul I was born Albino Luciani in 1912 and ordained a priest in 1935. Pope John XXIII appointed him bishop of Vittorio Veneto, Italy, in 1958, and Pope Paul VI appointed him as Patriarch of Venice in 1969.

His death on Sept. 28, 1978, 33 days after his election, caused a major controversy due to the Vatican’s secretive handling of it. Speculation around the cause of John Paul’s death was fueled by the book written by David Yallop, In God’s Name: An Investigation into the Murder of Pope John Paul I. Those rumors were debunked by Ms. Falasca in her full account of the pope’s death, Papa Luciani: Cronaca di una morte (Pope Luciani: Chronicle of a death), published in 2017.

The cause for John Paul I’s beatification was opened in his home diocese of Belluno, northern Italy, in November 2003 and is based on the testimony of 188 witnesses, including Benedict XVI. After the regular process of deliberations at the Vatican’s Congregation for the Causes of Saints, Pope Francis issued a decree on Nov. 8, 2017, recognizing that John Paul I had lived the theological virtues of faith, hope and charity to a heroic decree and declared him venerable.

The recognition of an allegedly miraculous healing of an Argentinian girl who suffered from a severe brain disease would open the door to John Paul's beatification.

At the end of November of that same year, an investigation was launched in the Archdiocese of Buenos Aires into the presumed unexplainable cure of an Argentinian girl who suffered from an acute form of encephalopathy, a severe brain disease. The documentation of the presumed cure was then sent to Rome for examination by the medical board of the Congregation for the Causes of the Saints. That examination took place on Oct. 31, 2019, and the doctors unanimously agreed that the cure could not be scientifically explained. The case was next referred to the congregation’s commission of theologians who also gave a positive verdict on May 6, 2021.