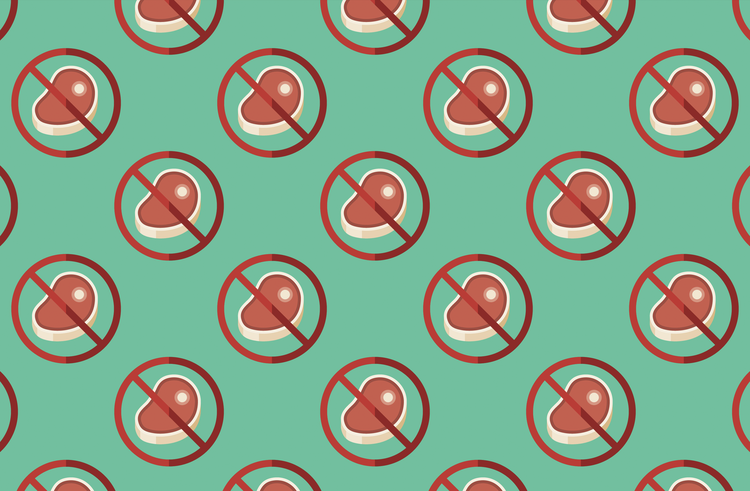 When the Intergovernmental Panel on Climate Change released its report on Aug. 8, I felt overwhelmed. In the face of the startling news that humanity’s window for mitigating the worst effects of global warming is shrinking by the year, it seemed like there was nothing that I could do as an individual that would make a noticeable change for our planet.

But the day after the report came out, I saw a tweet from Alessandra Harris, a Catholic author, encouraging Catholics to give up meat on Fridays. I thought this was a great idea—a healthy blend of spiritual rigor and environmental action. Agricultural production, particularly of beef, was responsible for fully one-tenth of the greenhouse gases emitted in 2019. More than 10 million acres of tropical forest were razed in 2020 alone, mostly to provide grazing land for livestock.

The concept of not eating meat on Friday was especially novel to me because, like a majority of Catholics today, I grew up without that practice outside of Lent. As far as I was aware, the church ended the year-round fasting back in the ’60s.

Meat consumption, particularly beef, was responsible for fully one-tenth of the greenhouse gases emitted in 2019.

A few Google searches later, though, I found out that the meat rule never went away. Catholics have just forgotten about it.

According to the Code of Canon Law, all Catholics who are able should fast and abstain on Fridays throughout the year to commemorate Christ’s passion, except when a solemnity falls on that day (No. 1249–53).

To be fair, the rules did change slightly in the United States around the time of Vatican II, but not as dramatically as people tend to think (if they think about it at all). In 1966, the U.S. Conference of Catholic Bishops released a pastoral statement advising that U.S. Catholics were allowed to seek alternate forms of penance on Fridays, partly because meat had become a commonplace food in American culture unlike in centuries past. Still, the bishops very explicitly recommended that whenever possible, Catholics should continue to abstain from meat on Fridays throughout the entire liturgical year. One reason for doing so was to ensure that Catholics “preserve a saving and necessary difference from the spirit of the world” (No. 24b). Just as ancient Israel observed dietary restrictions to distinguish it from other nations, the body of Christ ought to omit meat from our meals on Fridays to make us stand out amid the larger culture.

We as Catholics would do well to heed the bishops’ message. It remains true that far too many of us fail to integrate religion into our daily lives, whether out of negligence, embarrassment or fear. Like Peter on the eve of Good Friday, we are more than ready to proclaim that we will give up our lives for Christ. Yet we seem unable to make simple sacrifices in our day-to-day lives to glorify God.

Dropping meat from our Friday menus has the double benefit of reducing our carbon footprints (however minimally) and bringing us closer to the Lord.

In addition to this, the Catechism of the Catholic Church states that penances like abstaining from meat on Friday “help us acquire mastery over our instincts and freedom of heart” (No. 2043). This speaks directly to those of us in Western society today who have voracious appetites for new material goods and maintain lifestyles built around fossil fuel consumption. These extravagances can only start to be put in perspective when we are deprived of something—even if it is just not having meat for a day.

The U.S.C.C.B.’s statement from over 50 years ago also says that each Friday should be “a time when those who seek perfection will be mindful of their personal sins and the sins of mankind which they are called upon to help expiate in union with Christ Crucified” (No. 22). Fasting is also a means to reckon with our fallen nature as humans. Almost nowhere else is our collective sinfulness more apparent than in the scenes of environmental destruction that flash across our screens with terrifying frequency: the surfaces of the oceans ablaze as a result of an oil spill; temperatures 10 degrees warmer than previous records in the Pacific Northwest; wildfires threatening to destroy priceless sites of antiquity in Greece.

And just as important as the damage to nature itself, our disgraceful stewardship of the environment continues to displace, starve and kill millions of people around the world, most of whom live at the fringes of our attention and our compassion

So I wholeheartedly agree with Ms. Harris’s suggestion: Each of us should fast from meat on Fridays every single week of the year. Dropping meat from our Friday menus has the double benefit of reducing our carbon footprints (however minimally) and bringing us closer to the Lord. Those of us who are able may even consider switching to a largely plant-based diet, saving meat for special occasions.

In addition to policy action, we need a fundamental conversion of heart if we are ever to solve the climate crisis. Submitting ourselves to God through fasting seems like one of the best ways to start.

@laslo0728
Provide feedback on this article
Join the conversation: Login or create an account
Before you can comment, you need to update your profile to include your first and last name, as required in our comments policy. Then reload this page and you'll be set up for commenting. Update your profile