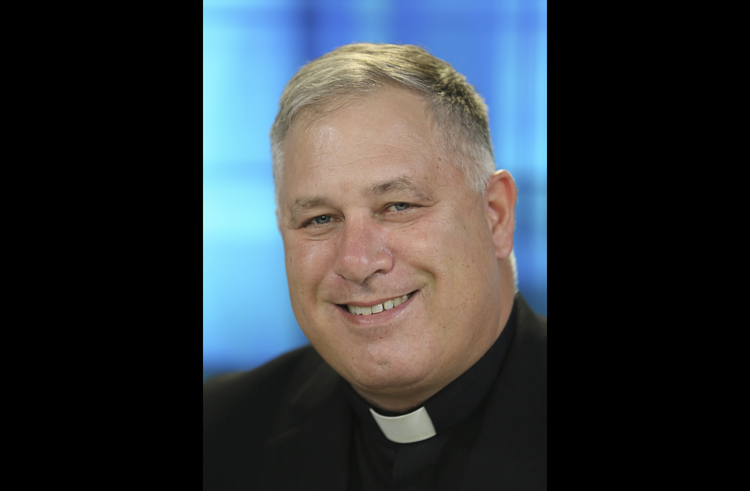 Msgr. Jeffrey D. Burrill, a priest of the Diocese of La Crosse, Wis., is pictured at the USCCB headquarters in Washington Nov. 17, 2020, during the bishops' virtual fall meeting. Msgr. Burrill resigned as USCCB general secretary July 20, 2021, amid "impending media reports alleging possible improper behavior." In announcing the resignation, Archbishop José H. Gomez of Los Angeles, USCCB president, said the claim "did not include allegations of misconduct with minors." amid an accusation of improper behavior. (CNS photo/Bob Roller)

"What was shared with us did not include allegations of misconduct with minors. However, in order to avoid becoming a distraction to the operations and ongoing work of the conference, Monsignor has resigned," the archbishop said.

"The conference takes all allegations of misconduct seriously and will pursue all appropriate steps to address them," he said.

In a lengthy story posted midday, The Pillar, an online outlet that covers the Catholic Church and provides news and analysis, said Archbishop Gomez's memo came after it had contacted the USCCB and Msgr. Burrill regarding evidence the news outlet claimed to have "of a pattern of sexual misconduct on Burrill's part."

The Pillar claimed it had "found evidence the priest engaged in serial sexual misconduct, while he held a critical oversight role in the Catholic Church's response to the recent spate of sexual abuse and misconduct scandals."

"An analysis of app data signals correlated to Burrill's mobile device shows the priest also visited gay bars and private residences while using a location-based hookup app in numerous cities from 2018 to 2020, even while traveling on assignment for the U.S. bishops' conference," it reported.

Commercially available app signal data, The Pillar said, "does not identify the names of app users, but instead correlates a unique numerical identifier to each mobile device using particular apps."

"Signal data, collected by apps after users consent to data collection, is aggregated and sold by data vendors. It can be analyzed to provide timestamped location data and usage information for each numbered device," The Pillar added.

Father Fuller, a priest of the Diocese of Rockford, Illinois, was named to the associate post Nov. 19. The priest had worked as the executive director of the USCCB's Secretariat of Doctrine and Canonical Affairs since August 2016.

"I ask for your prayers for Monsignor, and for the conference staff during this difficult time," Archbishop Gomez said. "We also pray that all those affected might find strength and comfort in our merciful Lord."

A priest of the Diocese of La Crosse, Wisconsin, Msgr. Burrill being named general secretary after the result of voting by the bishops was announced Nov. 16, during the first day of the USCCB's annual fall general assembly. He had been the conference's associate general secretary since March 1, 2016.

Prior to his USCCB appointment, Msgr. Burrill was pastor of St. Bronislava Church in Plover in central Wisconsin for three years. He was at the Pontifical North American College in Rome from 2009 to 2013, serving originally as director of apostolic formation and subsequently as the Carl J. Peter chair of homiletics, formation adviser and director of media relations.

He was ordained in 1998 for the Diocese of La Crosse. He was pastor of the parishes of St. Mary, in Duran, Holy Rosary in Lima, and Sacred of Jesus in Mondovi, Wisconsin, from 2001 to 2009. He also taught and was chaplain at Regis High School and Middle School in Eau Claire, Wisconsin, for two years prior to his parish assignments.

In addition, he was a regional vicar for six years, served two terms on the diocesan priests' council and also was the diocese's ecumenical officer and a member of the seminary admissions board.

A native of Marshfield, Wisconsin, Msgr. Burrill has a bachelor of arts degree from Immaculate Heart of Mary Seminary, adjacent to the campus of St. Mary's University of Minnesota, in Winona, and a bachelor of sacred theology from Rome's Pontifical Gregorian University. In 1999, he earned a licentiate in ecumenical theology from the Angelicum, or Pontifical University of St Thomas Aquinas, which also is in Rome.