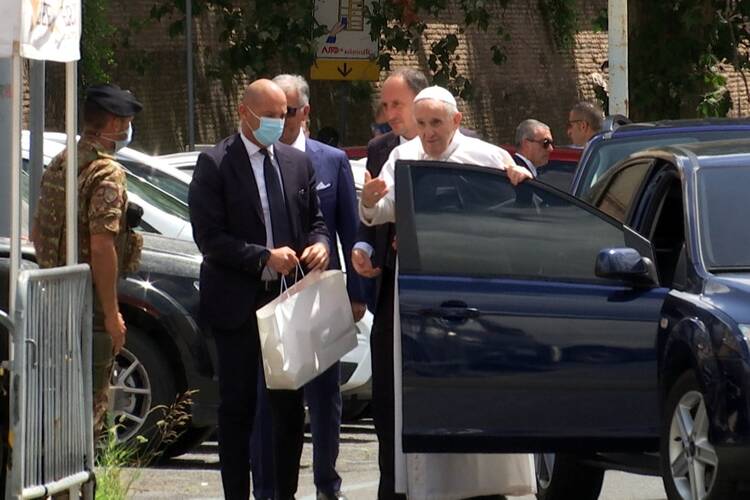 Pope Francis greets police officers before entering the Vatican after being discharged from Rome's Gemelli hospital following his recovery from colon surgery in this screengrab taken from a video July 14. (CNS photo/Cristiano Corvino, Reuters TV screengrab)

Pope Francis returned to the Vatican just before midday, July 14, after spending nine days in the Gemelli hospital recovering from an intestinal operation on July 4.

The news was first broken by ANSA, the Italian state news agency, and confirmed after his entry to the Vatican by the director of the Holy See press office, Matteo Bruni.

“Before returning to the Vatican, the pope went to the Basilica of Saint Mary Major where, before the icon of the Virgin Mary Salus populi romani, he expressed his gratitude for the success of his surgery and offered a prayer for all the sick, especially those he had met during his stay in hospital,” Mr. Bruni said.

Francis left the Gemelli hospital in the same blue Ford Focus economy car in which he had arrived here 10 days ago. Some media photographers captured his departure.

After stopping to pray and before entering by the Perugina Gate of the city-state, he got out of the car to greet the police and soldiers guarding that entrance. Some waiting journalists captured the moment with their smartphones.

It came as no surprise that Pope Francis returned to the Vatican’s Santa Marta guesthouse today as photos from yesterday afternoon, July 13, showed him looking very well and walking easily as he visited children in the pediatric oncology ward on the 10th floor of the hospital. They showed he had lost weight too, which is hardly surprising given his enforced postoperative diet in hospital.

This was the first time that Francis has been hospitalized since he was elected pope on March 13, 2013. He has a robust constitution and had enjoyed good health during these years as pope, except for bouts of sciatica, an ailment that originated back during his time as archbishop of Buenos Aires from 1998 to 2013. It troubles him from time to time and he receives physiotherapy twice a month.

Francis now returns to his suite in Santa Marta, where he will spend the remainder of his “home holiday” until he recommences his weekly public audiences on Aug. 4. All public and private audiences have been suspended until that date, but Francis will continue to recite the Angelus from the study window of the Apostolic Palace at midday on Sundays.

As usual, during this period, he will read books, listen to music, meet friends, perhaps write and is likely to review his busy agenda for the remainder of this year. That agenda includes the publication of the constitution on the reform of the Roman Curia, two or three foreign trips—including a stopover in Hungary for the closing Mass of the International Eucharistic Congress on Sept. 12 and a follow-on visit to Slovakia, a one-day visit to Glasgow, Scotland, for the UN COP 26 conference on climate change in November, and perhaps also a visit to Cyprus and Malta that same month.

He is also likely to consider making some senior level appointments in the Vatican over the coming months and holding a consistory to create new cardinals either at the end of this year, or early in 2022. On the horizon too are expected meetings with heads of state, including President Biden in October when he comes to Rome for the G20 summit.