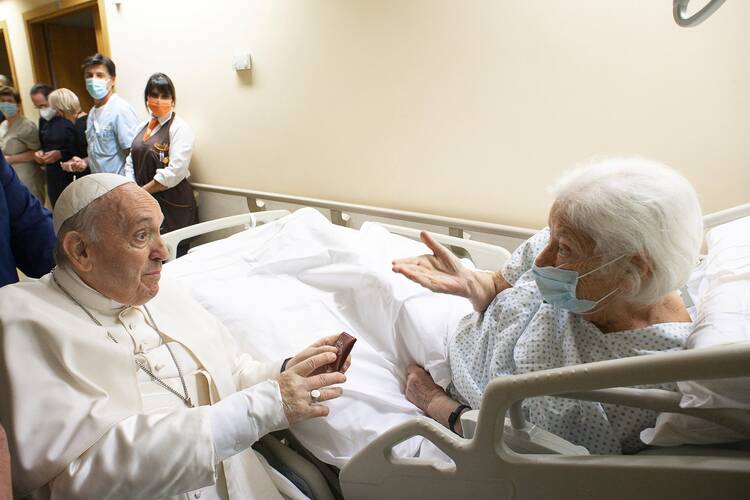 Pope Francis gives a rosary to a patient at Gemelli hospital in Rome July 11, 2021, as he recovers following scheduled colon surgery. Earlier the pope led the Angelus from a balcony at the hospital. (CNS photo/Vatican Media via Reuters)

Pope Francis continues to make progress after his operation. He “has completed the post-surgical course of this recovery” and yesterday had a quiet day, but he will remain in hospital for to “optimize in the best way possible the medical and rehabilitation therapy.”

The Argentinian pope, who was always keen on soccer and continues to follow the fortunes of his favorite team, yesterday rejoiced at the victories over the weekend of Argentina in the Copa America and of Italy in the Eurocup 2020 championships.

The director of the Holy See Press Office, Matteo Bruni, reported this in the seventh bulletin on the pope’s condition. The report is based on information received from the pope’s doctors at the Gemelli Hospital in Rome. An earlier report had envisaged that the pope would remain in hospital for “around seven days” after his intestinal operation “unless there are complications.”

Pope Francis continues to make progress after his operation but will remain in hospital for to “optimize in the best way possible the medical and rehabilitation therapy.”

Today’s bulletin does not mention any complications but explains that the pope will remain “some more days” in hospital so that he can benefit “from the medical and rehabilitative therapy” after an operation that lasted three hours and involved both laparoscopy and open surgery.

The 84-year-old Francis looked well yesterday when he appeared at midday on the balcony of his 10th-floor hospital suite and addressed hundreds of Romans and pilgrims as well as medical staff and patients. He seemed to be at ease as he stood and spoke for around 10 minutes to his local and global audience and at times added off-the-cuff remarks to his prepared text, as he so often does on these occasions.

Later in the afternoon, however, photos showed him being pushed in a wheelchair as he visited patients and greeted medical staff in nearby wards on the 10th floor. A Vatican source, who asked not to be identified because he was not authorized to speak, said Francis gave permission for the photos to be released and added that it was necessary to use the wheelchair when he visited the wards on the same floor to avoid putting any unnecessary pressure on the abdominal wound that is healing after the open surgery.

The Argentinian pope, who was always keen on soccer, yesterday rejoiced at the victories over the weekend of Argentina in the Copa America and of Italy in the Eurocup 2020 championships.

Today’s report revealed that before reciting the Angelus yesterday, Pope Francis “wished to meet some of the young child-patients in the nearby oncology ward, together with their family members,” and “afterward some of them accompanied him onto the balcony” for the recital of the Marian prayer.

After reciting the Angelus, Mr. Bruni said, the pope “visited patients recovering on the same floor and also greeted briefly the medical personnel and nurses.”

On Sunday afternoon, the Vatican spokesman said, Pope Francis celebrated Mass in the chapel of the private suite “together with the personnel that daily assist him.”

Mr. Bruni concluded by revealing that Pope Francis “shared his joy with those who are close to him” at the victory of his homeland Argentina and of Italy over the weekend. Argentina beat Brazil on Saturday evening, and Italy defeated England Sunday evening.

Mr. Bruni added that the pope also spoke about “the significance of sport and its values” and referred to “that sporting capacity of knowing how to accept whatever the outcome, even if it is defeat.” He quoted Francis as saying, “Only in this way, faced with the difficulties of life, can one always put everything into the game, struggling without giving up, with hope and confidence.”