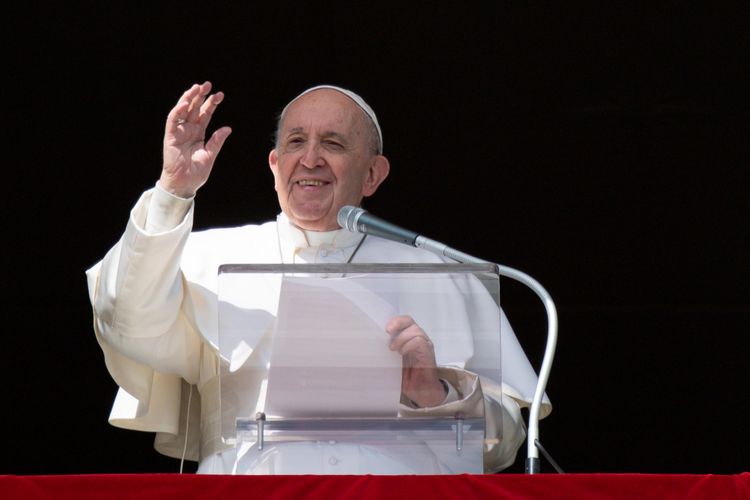 In this file photo, Pope Francis greets the crowd as he leads the Angelus from the window of his studio overlooking St. Peter's Square on Feb. 28, 2021. He is expected to recite the Angelus tomorrow from Gemelli Hospital. (CNS photo/Vatican Media)

Pope Francis experienced a “calm” day on Friday, July 9, according to the Vatican press office, and continued to make “the expected clinical progress” after his intestinal surgery on Sunday, July 4. “His blood tests are satisfactory and he is continuing the prescribed treatment.”

The director of the Holy See press office, Matteo Bruni, stated this in the sixth post-operation report, issued at midday on July 10 and based on information from the doctors at the Gemelli Hospital, where the pope is recovering.

Pope Francis “is gradually resuming work and continues to stroll in the corridor of the apartment” and “he celebrated Holy Mass in the private chapel” yesterday afternoon, Mr. Bruni said.

Pope Francis “continues to stroll in the corridor of the apartment” and “celebrated Holy Mass in the private chapel” yesterday afternoon.

As a further sign of his progress, Mr. Bruni reported that on the evening of July 9, the pope “dined with those who are assisting him during these days.”

Today’s report, like the previous ones, concluded with remarks that appear to have been inserted at the pope’s request. It said that “experiencing first-hand the human dedication of the medical and health personnel assisting him,” Francis “addressed a special thought to all those who with care and compassion choose the face of suffering, engaging in a personal relationship with the sick, especially the most fragile and vulnerable.”

Il Messaggero, the Rome daily, reported that among the many expressions of good wishes for a speedy recovery that have been arriving from all over the world, reported that Francis was particularly touched by the bunch of flowers sent to him by a group of formerly homeless people in Rome for whom he had found a place to live. “We have found a home thanks to you, and now we have come to thank you [with these flowers.] We wish you well and we are praying for you,” they said in the message accompanying the flowers.

While today’s report added little new substantial information except to confirm that his recovery is on track, attention is turning to the Angelus tomorrow, the first time that the public will see him since he underwent the intestinal operation. The Vatican announced yesterday that he will recite the Angelus from the 10th floor of the Gemelli Hospital, but it has not yet made clear whether he will appear at the window of his hospital suite or recite the prayer from the private chapel of that same apartment via streaming video.