Pope Francis suffered a temporary fever, but doctors have found no sign of infection 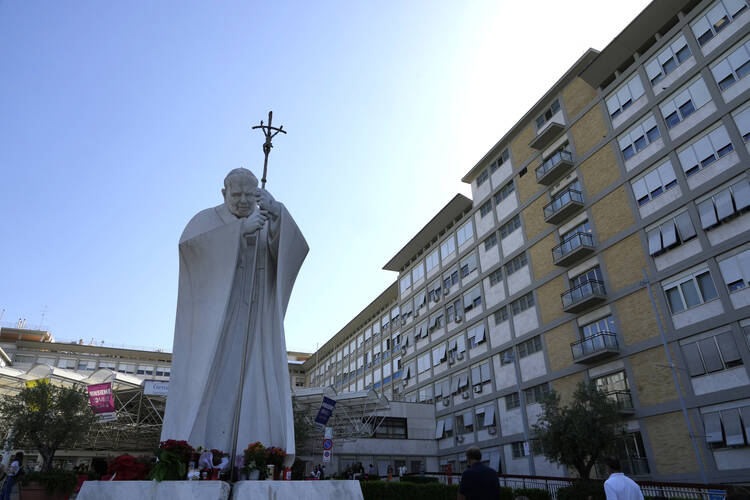 The statue of Pope John Paul II is seen at the entrance of the Agostino Gemelli Polyclinic in Rome, Wednesday, July 7, 2021, where Pope Francis was hospitalized Sunday. (AP Photo/Alessandra Tarantino)

Pope Francis had a temporary fever last evening, July 7, after passing “a quiet day, eating and moving unassisted.” But “routine microbiological examinations” and a CT scan of his chest and abdomen carried out this morning came back negative.

The director of the Holy See press office, Matteo Bruni, stated this in the fourth report on the pope’s post-operation condition, based on information received from his doctors at Rome’s Gemelli Hospital.

It confirmed that the pope “is continuing with his planned treatment” and added the detail that he is “eating by mouth.” Yesterday, the report said the doctors had “suspended his infusion therapy,” which meant he was no longer being given medication or food in that way.

The report adds that on the afternoon of July 7, Pope Francis “wished to express his paternal closeness to the young patients in the nearby paediatric oncology and children’s neurosurgery wards” and sent them “his affectionate greetings.” It added that “at this particular moment” he is thinking about “all those who suffer, expressing his closeness to the sick, especially those most in need of care.”

Yesterday’s Vatican update implied there was no evidence of cancer detected during an examination of the tissue removed Sunday from Francis’ colon. Doctors said that was a good sign and evidence that the suspected condition of a narrowing of the colon due to inflammation and scarring had been confirmed.

“The fact that he is eating means his intestinal tract is working as it should,” said Dr. Walter E. Longo, professor of surgery and colon and rectal surgery at the Yale University School of Medicine and Yale-New Haven Health, who was not involved in Francis’ care. “The fact that infusion therapy has been discontinued means the amount of fluid he needs for sustaining his everyday functions is now being met by his oral intake.”

Pope Francis “wished to express his paternal closeness to the young patients in the nearby paediatric oncology and children’s neurosurgery wards” and sent them “his affectionate greetings.”

Mr. Bruni said final examination of the affected tissue “confirmed a severe diverticular stenosis with signs of sclerosing diverticulitis,” or a hardening of the sacs that can sometimes form in the lining of the intestine.

Dr. Manish Chand, an associate professor of surgery at University College London who specializes in colorectal surgery, said the hardening of the tissue would have occurred as a result of repeat inflammation and infection, resulting in scarring that makes the colon less elastic.

He said there was always a concern in such cases that there may be a small cancer that hadn’t been seen in previous imaging. In such cases, pathologists would put a specimen of the removed tissue under a microscope to see if there were any cancer cells.

“It is reassuring to hear that there is no underlying tumor and that the diagnosis of diverticular disease is confirmed,” said Dr. Chand, who also was not involved in Francis’ care.

Material from the Associated Press was included in this report.