Catholics: We need to talk about sex, religion and politics. 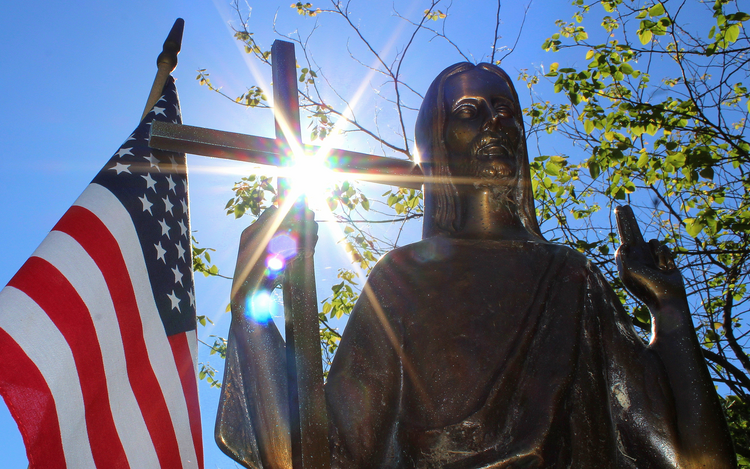 Sun shines through a statue of Christ on a grave marker alongside an American flag at St. Mary Catholic Cemetery in Appleton, Wis., in this 2018 photo. (CNS photo/Bradley Birkholz) See STATE-RELIGIOUS-FREEDOM-REPORT June 11, 2020.

You may have heard the old admonition never to talk about sex, religion or politics in polite company. Often these conversations can lead to discord, division and sometimes even violence. We all know the particularly hot issues: Marriage. Abortion. Gender identity. Adoption by same-sex couples. As a result, many people try to avoid talking about these topics altogether.

I, however, talk about sex, religion and politics frequently. I try to do it with civility, charity and good will. I actively listen and engage with other people of good will whose views are in conflict with my own.

I have come to realize that many of these heated public debates center on an important principle: religious liberty. Unfortunately, many people do not have an adequate understanding of or appreciation for religious liberty in this country.

I have come to realize that many of these heated public debates center on an important principle: religious liberty.

John Courtney Murray, S.J., who served as an associate editor at America, contributed so much to our collective understanding of religious freedom, both in the Catholic Church and more broadly. Father Murray helped the Catholic Church evolve from a position of religious tolerance to one of religious freedom as defined in “Dignitatis Humanae” (the Second Vatican Council’s “Declaration on Religious Freedom”) and “Nostra Aetate” (Vatican II’s “Declaration on the Relation of the Church to Non-Chriustian Religions”).

Be prepared: This is a conversation about sex, religion and politics, because deepening our understanding of religious liberty demands it.

The key to understanding religious freedom from a Catholic perspective is first understanding human dignity vis-à-vis the freedom of individuals and of communities to believe and practice their religion in modern society.

We should reacquaint ourselves with these teachings as we grapple with challenges to the free exercise of religion today.

Some might also look at “Religious Freedom for the Good of All: Theological Approaches and Contemporary Challenges,” published in 2019 by the International Theological Commission of the Catholic Church.

This scholarly reflection puts forward religious freedom as a prerequisite not only for human dignity but also for the realization of the common good amid increasingly diverse and difficult settings.

Marriage. Abortion. Gender identity. Adoption by same-sex couples. What happens if exercising my religious liberty in these areas is perceived as discrimination against another person?

I found this passage noteworthy given the challenges we face in witnessing to our faith today:

A believing church that lives in a pluralistic and multicultural society must develop skills suited to the new existential conditions for the witness of faith. These conditions are not so different from those that the Church was first called to sow and flourish (No. 10).

On this week’s episode of “The Gloria Purvis Podcast,” I speak with Robert P. George, an expert on religious liberty. He is the McCormick Professor of Jurisprudence and the director of the James Madison Program in American Ideals and Institutions at Princeton University. He is considered one of our country’s pre-eminent conservative intellectuals and a defender of religious liberty and freedom of speech in the United States and around the world.

Be prepared: This is a conversation about sex, religion and politics, because deepening our understanding of religious liberty demands it. Marriage. Abortion. Gender identity. Adoption. What happens if exercising my religious liberty in these areas is perceived as discrimination against another person? How can the church simultaneously uphold religious liberty and stand on the side of those who are, and have historically been, ostracized or oppressed? Listen now to hear how Professor George thinks about these important questions.

[Listen to this next: Yes, Critical Race Theory is compatible with Catholicism. Here’s why.]