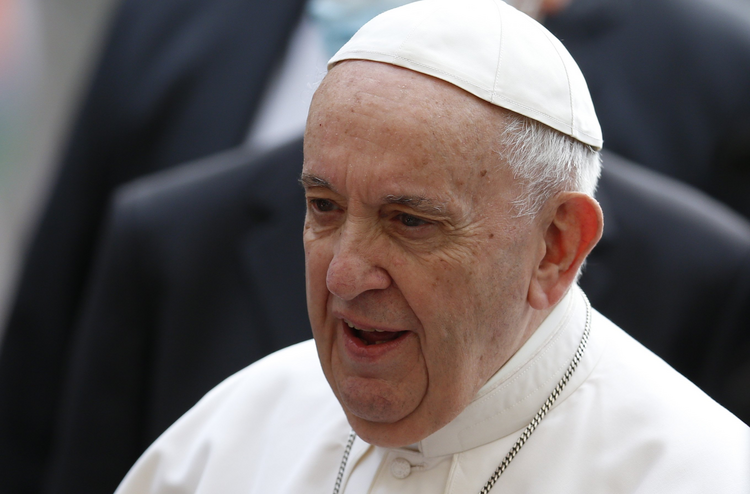 Pope Francis is pictured at the Vatican on June 9, 2021. (CNS file photo/Paul Haring)

Pope Francis continues to recover after his intestinal operation on Sunday evening. He slept well, had breakfast, read the daily newspapers and got up to walk, according to the latest report from the Vatican released to the press at midday on July 6. It added that “the routine” post-operation medical tests “are good.”

“His Holiness Pope Francis rested well during the night” and “this morning he had breakfast, read some daily newspapers and got up to walk,” the director of the Holy See press office, Matteo Bruni, said in the statement issued to the press.

“His Holiness Pope Francis rested well during the night” and “this morning he had breakfast, read some daily newspapers and got up to walk.”

Mr. Bruni also reported that “the course of his post-operation [recovery] is regular” and “the routine control tests are good.”

This was the third statement issued by the Vatican press office on Pope Francis’ state of health after the surgery at the Gemelli Hospital in Rome on Sunday evening, which started at 6:30 p.m., according to various sources, and ended three hours later.

The upbeat tone was also reflected in most of the Italian national newspapers this morning. Il Messaggero and La Stampa reported that Francis had displayed his usual sense of humor in conversation with his doctors yesterday. Il Messaggero added that he got up and sat in an armchair for some time.

Francis wanted to avoid the media frenzy and speculation that happened every time Pope John Paul II was hospitalized.

Several Italian newspapers, including La Repubblica, provided an interesting piece of information that has not been confirmed officially by any of the doctors involved in the operation, nor by the Vatican. They reported that the operation lasted an hour longer than anticipated because the doctors were unable to complete the surgery using laparoscopy and had to use open surgery.

America has learned that Pope Francis gave instructions regarding how his operation and stay in hospital were to be communicated to the press. He asked that the news be released only from the Vatican press office and only by written statements, without going into detail about the surgery except for the bare essentials, and without having Vatican officials or doctors going in front of television cameras. It seems that he wanted his operation and stay in the hospital to be treated like that of any ordinary person and kept low-profile. That is, he wanted to avoid the media frenzy and speculation that happened every time Pope John Paul II was hospitalized. He has largely succeeded in this: The Vatican’s statements have been remarkable for their conciseness, brevity and providing only essential information.

Explainer: What kind of surgery did Pope Francis have?
Maria Cheng - Associated Press

Pope Francis ‘in good general condition’ after surgery, expected to remain in hospital for one week
Gerard O’Connell

Sources told America they expect the pope to remain in the hospital for seven days at least. They exclude the possibility that he will appear at the papal study window next Sunday to recite the Angelus and pray with pilgrims in St. Peter’s Square. It is not yet known if Francis will follow the precedent set by John Paul II, who recited the Angelus and greeted the faithful from the suite in the 10th floor of the Gemelli Hospital, on a number of occasions. Francis is now a patient in that same suite.

People around the world are praying for the pope’s complete and rapid recovery, and bishops in many dioceses have asked their people to pray for him too. Benedict XVI is praying for him too, his secretary, Archbishop Georg Ganswein, told Italian television. He said he prayed for him when he underwent the operation and has been praying since for his complete recovery. Muslims have been praying for the pope too, and the Grand Imam of Al Azhar tweeted a message in Arabic and Spanish praying for his recovery.