Pope Francis ‘in good general condition’ after surgery, expected to remain in hospital for one week 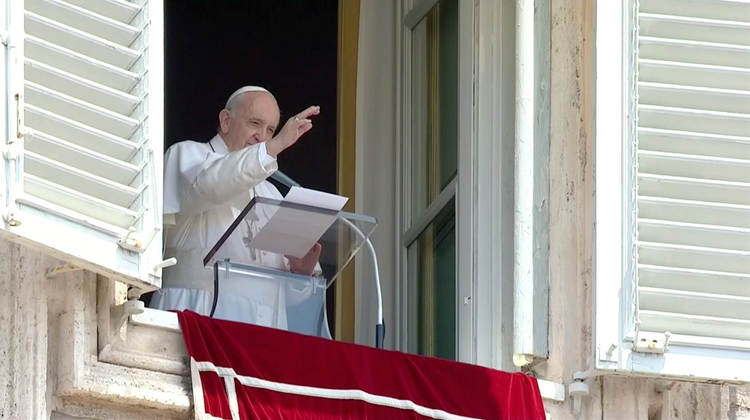 Pope Francis greets the crowd as he leads the Angelus from the window of his studio overlooking St. Peter's Square at the Vatican July 4, 2021. Afterward, the 84-year-old pope was admitted to Rome's Gemelli hospital for a prescheduled colon surgery. (CNS photo/Guglielmo Mangiapane, Reuters)

UPDATE: The latest report from the Vatican released to the press at midday on July 6 said that that the pope’s recovery is going well and that “the routine” post-operation medical tests “are good.” Read the latest here. He is expected to spend seven days in the hospital, the director of the Holy See press office, Matteo Bruni, said in a statement issued to the press at midday on July 5.

“The surgical intervention for the diverticular stenosis was carried out on the evening of July 4 and involved a hemicolectomy on the left [side] and lasted around 3 hours,” Mr. Bruni said.

A hemicolectomy is a type of surgery done to remove part of the large intestine called the colon. The colon can be partially removed without affecting the way it works in the digestive system. Once the affected part is removed, the remaining ends are joined together with almost no impact on digestion.

The operation was carried out under a general anesthesia by Dr. Sergio Alfieri. The Vatican reported last evening and added that the pope had “responded well” to the intervention. The doctor who carried out the operation was part of the team trained by the late Francesco Crucitti, who operated on St. John Paul II after an assassination attempt on May 13, 1981. Dr. Crucitti became John Paul's personal surgeon.

The Vatican is expected to issue another update on the pope’s condition later today.

Pope Francis, 84, underwent a pre-planned surgery for a restriction of the sigmoid portion of the large intestine at the Gemelli Hospital in Rome this Sunday afternoon, the director of the Holy See press office, Matteo Bruni, confirmed just before midnight local time.

“The Holy Father reacted well to the intervention carried out under a general anesthesia by Professor Sergio Alfieri,” he said, without giving further details, except for the names of eight doctors involved, plus the two Vatican doctors (including the pope’s personal physician) who were present.

Diverticular disease is the general name for a common condition that involves small bulges or sacs called diverticula that form from the wall of the large intestine (colon). Stenosis, in this context, means a narrowing of the intestinal tract.

Pope Francis, 84, underwent a pre-planned surgery for a restriction of the large intestine at the Gemelli Hospital in Rome this Sunday afternoon.

The operation took place some hours after Mr. Bruni first broke the news of the pope’s entry to hospital around 3.20 p.m. (Rome time), July 4. It seems it lasted several hours, but there is no official confirmation of this.

Francis arrived at the Gemelli hospital around 3 p.m. in a small car driven by a chauffeur and accompanied by an assistant, according to the Italian news agency ANSA. He was assigned the suite on the tenth floor of the hospital that was once used by John Paul II, who also underwent surgery here several times, including after the assassination attempt in 1981 and for the removal of a benign tumor of the colon in 1992.

Earlier in the day, Francis looked cheerful and in good form when he greeted pilgrims and recited the Angelus with them at midday, and announced his forthcoming two-and-a-half day visit to Slovakia (Sept. 12-15) with a brief visit to Budapest, Hungary, to celebrate Mass at the conclusion of the International Eucharistic Congress, on the morning of Sept. 12.

Surprisingly, however, he gave no indication that he would enter the hospital in the afternoon, and the announcement could be seen as downplaying the seriousness of the operation. Nevertheless the news came as a shock to people. Many recalled that last Sunday, June 27, the pope had made an unusual request for prayers that caused people to wonder if he was not well. He said at the time: “I ask you to pray for the pope, pray in a special way. The pope needs your prayers.” He thanked them and said, “I know you will do that.”

Earlier in the day, Francis looked cheerful and in good form when he greeted pilgrims and recited the Angelus with them.

America learned that two weeks ago Francis alerted some persons in his inner circle of the possibility of an impending operation. It seems he has been experiencing “some discomfort” and was advised to undergo surgery.

Since Francis, as usual, has started his “home-holiday period” on July 3, and has suspended all public audiences until Aug. 4, he deemed this was an appropriate time for him to have this “elective surgery.” One informed source, who asked not to be identified because he was not authorized to speak, told America he understood the intervention was “a general maintenance intervention.” He said it was important to intervene early because if such a problem was left unattended, it could perhaps cause serious complications later. He said the 55-year-old Roman doctor would likely use “keyhole surgery,” whereby an operation (laparoscopy) is performed in the abdomen using small incisions, and with the aid of a camera.

Francis has not had any serious health problems since he became pope on March 13, 2013, except for the sciatica that has caused him suffering since his days as archbishop of Buenos Aires when he opted not to have an operation to deal with that ailment.

The sciatica has caused him much pain too as pope and, on doctor’s advice, he cancelled his participation in the liturgical celebrations on New Year’s Eve, and on the first days of 2021, but he returned to normal on Jan. 23. To help cope with the sciatica, he was put on a diet to reduce weight.

Francis has not had any serious health problems since he became pope, except for the sciatica that has caused him suffering since his days in Buenos Aires.

The only other problem that Francis has had to deal with in his eight years as pope was cataracts in both eyes. He underwent brief, successful interventions for this ailment less than two years ago.

In 1957, at the age of 21 and as a student in the seminary, the young Jorge Mario Bergoglio underwent a serious operation with a general anesthetic that involved removing the top lobe of his right lung. But he has recovered from that, and it has never caused him any problem since, he told the Argentine journalist, Nelson Castro, in an interview for his book, La Salud de los papas.

In that same interview, Francis revealed that as Jesuit provincial he underwent surgery for “gangrene of the gallbladder” and later, as archbishop of Buenos Aires, he had something similar to a pre-heart attack in 2004 but was treated successfully by doctors, without surgery, in the San Camillo Hospital in Buenos Aires. Apart from this, Francis said, he is in reasonably good health for a man of his age.

Shortly after the Vatican broke the news of the pope’s operation the diocese of Rome stated in a press communique that the faithful “are praying for the Holy Father, and for doctors that are caring for him.”

The president of Italy, Sergio Mattarella, in Paris on a state visit, sent “affectionate good wishes” to Pope Francis “in the name of all the Italians” and wished him “a good convalescence and better still, a speedy recovery.”

The Islamic Judge Mohamad Abdel Salam, a former close advisor to the Grand Imam of Al Azhar and secretary general of the Higher Committee for Human Fraternity, told America, “I, my family and the Grand Imam pray to God to bless His Holiness with smooth and swift recovery, and to protect him from any harm.”