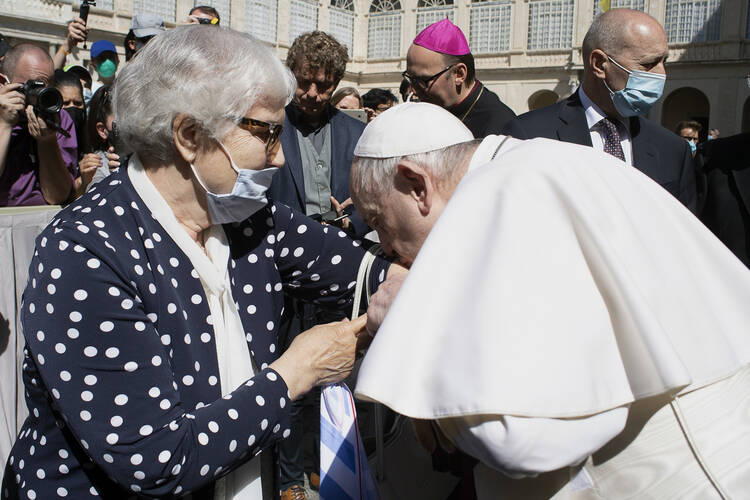 Pope Francis leans and kiss a tattoo on the arm of Holocaust survivor Lidia Maksymowicz, a Polish citizen who was deported to Auschwitz from her native Belarus, during his weekly general audience at the Vatican, Wednesday, May 26, 2021. (Vatican Media via AP)

VATICAN CITY (RNS) — Pope Francis kissed the numbered tattoo of a survivor from the Nazi death camp at Auschwitz on Wednesday (May 26) after his general audience with the faithful at the Vatican.

“The gesture by the Holy Father strengthened me and reconciled me with the world,” said Lidia Maksymowicz, 80, a Polish woman of Belorussian descent who survived the concentration camp as a child, speaking to Vatican News after her encounter with the pope.

The brief moment with Pope Francis was made of few words, a kiss on the tattooed “70072” on her elderly arm and a warm embrace. The pope blessed the woman by putting his hand above her head. “We didn’t have to say anything, there was no need for words,” she said.

Maksymowicz was only 3 years old when she was taken from her home along with her mother and grandparents to the concentration camp in Poland. Her family was suspected of cooperating with the local partisans opposing the Nazi occupation.

Pope Francis kissed the numbered tattoo of a survivor from the Nazi death camp at Auschwitz on Wednesday after his general audience with the faithful at the Vatican.

“I was small, I was very young, but I already had a lot of experience having lived through the war in the ex-Soviet Union,” she said. “I was prepared for the pain, the evil that men do to other men, but I never thought I would experience what I experienced in Auschwitz.”

After being separated from her mother and having watched her grandparents be ushered toward the gas chambers, Maksymowicz was led to the barracks where children were kept. She was among the women, children and people with disabilities who were experimented upon by Josef Mengele, the Nazi physician known as “the Angel of Death.”

“Mengele was a horrible person, without limits or scruples,” she said. “Day after day many people lost their lives by his hands.”

After the Russian forces freed the camp at Auschwitz, Maksymowicz was welcomed by a Catholic Polish family not too far away, in Oświęcim. It wasn’t until 1962 that she found her biological mother — who also had survived the camps — thanks to the international charity the Red Cross.

“The gesture by the Holy Father strengthened me and reconciled me with the world,” said Lidia Maksymowicz, 80, a Polish woman of Belorussian descent who survived the concentration camp as a child.

“I had two mothers,” she said, noting that the meeting with the pope took place on Mother’s Day in Poland, which for her is “a special recurrence.”

Though the meeting with Francis was short, Maksymowicz had time to hand over to the pontiff three gifts that she felt represented her life experience and signified memory, hope and prayer. The survivor handed the pope a Polish commemorative handkerchief, a painting of a mother and child walking toward a death camp and a rosary showing St. John Paul II.

“After John Paul II, I love Pope Francis,” she said. “I follow his ceremonies on TV, I pray for him every day, I’m faithful to him and fond of him.”

In July 2016, Pope Francis visited the Auschwitz-Birkenau camp, where he stood in silence and wrote a message asking God for forgiveness for “such cruelty.” John Paul II was the first pope to visit the concentration camps, in 1979.

Maksymowicz was in Italy for an event organized in northern Italy for the documentary based on her life, “The Child Who Didn’t Know How to Hate.” She frequently attends gatherings where she can share her experience with younger people and encourage new generations to not forget the horrors of the past.

“In your young hands there’s the future of the world,” she said, appealing to young people Wednesday through the Vatican journalists. “That history must never repeat itself.”