Discernment is for every Christian — not just Jesuits: an interview with Arturo Sosa, SJ 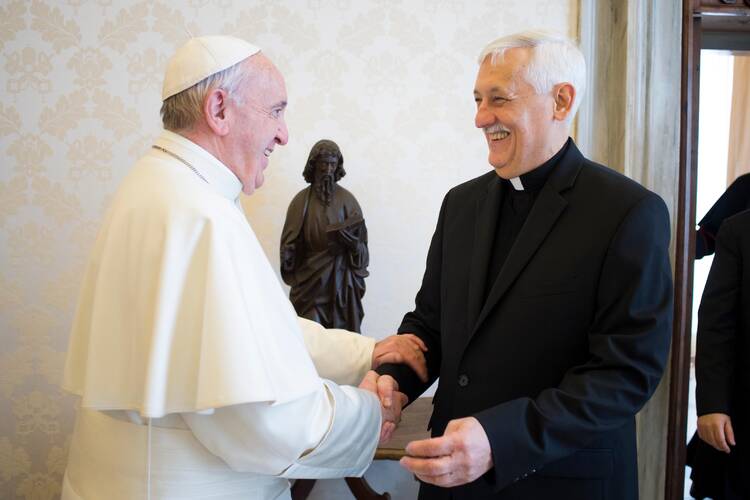 Pope Francis greets Father Arturo Sosa Abascal, superior general of the Society of Jesus, before a meeting with editors and staff of the Jesuit-run magazine, La Civilta Cattolica, at the Vatican Feb. 9, 2017. (CNS photo/L'Osservatore Romano, handout)

On May 20, 2021, the Society of Jesus kicks off the Ignatian Year, a celebration of the 500th anniversary of the conversion of St. Ignatius Loyola following his “cannonball moment” on the battlefield of Pamplona. To kick off this year of prayer and deepening conversion in our own lives, America spoke with Arturo Sosa, S.J., the superior general of the Jesuits. Ashley McKinless, the host of the “Jesuitical” podcast, and Colleen Dulle of “Inside the Vatican” ask Father Sosa what Christians today can learn from Ignatius’ journey toward Christ, about his relationship with Pope Francis and more.

Ashley McKinless: Since you are the superior general of the Jesuits, and Pope Francis is our first Jesuit pope, who’s in charge? Do you report to him or does he report to you?

Arturo Sosa, S.J.: He is the pope, so it’s very clear. Every Jesuit reports to the pope. When a Jesuit becomes a bishop, his obedience [is no longer] to the superiors of the Society. No, the bishop depends on the pope, and the pope depends on himself, on the Spirit. Ignatius Loyola used to call the pope the vicar of Christ on Earth. [Francis] is the pope. So I am accountable to him.

It is a very fraternal and respectful relationship. Pope Francis knows very well the Society of Jesus. And knows how just we can help him, and he knows what to ask the Society and which persons can be missioned for his projects. And in a very fraternal way, we know each other from many, many years ago. So it is a relationship that has been growing differently in different moments of my life.

AM: You’ve said the pope is the pope. Who is the superior general? How would you describe your job?

I would describe it as the neck of a body. You know that Ignatius and St. Paul love to use the image of the body for the church and for the Society of Jesus. And I feel I am the neck of a body, and the head is Jesus Christ. The superior general is the one who tries to assure the connection between the body and its head. And that’s my task, to be the neck, to be the communication between the Society of Jesus and the head, Jesus Christ.

I feel I am the neck of a body, and the head is Jesus Christ. The superior general is the one who tries to assure the connection between the body and its head.

CD: We are entering the Ignatian Year, which is a celebration of the 500th anniversary of the cannonball injury that St. Ignatius experienced while he was defending Pamplona. It was a pivotal moment in his life. He was on bedrest. He began his conversion process then. Why is it important for the Jesuits to return to that moment of conversion in Ignatius’ life? What does it teach us today?

We do not “return to”; we are not going back. We make memory of a special moment that actually opens a new path for the life of a man, Ignatius Loyola—a moment that led him to found the Society of Jesus. We are remembering that because we can still learn a lot from Ignatius’ process.

A very important teaching is that by finding Jesus in our life, we can experience styles of living we cannot even imagine by ourselves. And that’s what happened to Ignatius. Ignatius never imagined what his life became after the personal encounter with Christ. If we open ourselves to deepen our relationship with Jesus, things will become new to our eyes, and new dimensions of our life’s mission will be renewed in a way we cannot plan or even imagine.

If we open ourselves to deepen our relationship with Jesus, new dimensions of our life’s mission will be renewed in a way we cannot plan or even imagine.

That’s why, in this year, we do not talk about Ignatius. We talk about how we can see all things new—from the point of view of Christ. That’s what Ignatius learned in his own process.

Pope Francis is not only a Jesuit; he is a Christian. And discernment is part of Christianity. Discernment is an essential dimension of Christian life in all times. It is not something recent. Jesus was a man of discernment. If you read attentively the Gospels, you will see a man who is all the time trying to understand what is God’s will, to follow God’s will, and all Christians should do that. That’s why Jesus stayed with us after the resurrection, through the Spirit. He gave us the most precious gift: his Spirit, the way of discerning.

Pope Francis is not only a Jesuit; he is a Christian. And discernment is part of Christianity.

We are about to celebrate Pentecost in a few days. So we can renew our idea of being guided by the Spirit. Discernment is the skill every Christian needs to be guided by the Holy Spirit. And that’s why Ignatian spirituality is pointed to that.

Ignatian Spiritual Exercises are a kind of discernment school. Following the Spiritual Exercises, every person can be helped to hear the voice of God calling him to a fully human life and to decide to follow that voice—to make an election.

AM: So all Jesuits do the Spiritual Exercises, but one thing that’s always struck me about the Society is the diverse directions that Jesuits go in from there. You have Jesuits who are teachers, doctors, actors, podcasters, everything you can think of. That’s clearly part of the Jesuit charism and the strength of the order. But as the person who’s on top of that, at the neck, how do you manage such a diverse workforce?

Every day I discover something new that Jesuits are doing! Because each Jesuit is a font of creativity. And it is very important to understand that the Society of Jesus is not an organization for “doing something.” It’s not a job. No, the Society of Jesus is made of people who want to respond to the call of the Spirit. And as we also learned from the Bible, the Spirit—we don’t know where he’s going to guide us.

So what we need is to be very in touch with the Spirit. We do not invent a mission for ourselves or try to do new things because of the novelty they can have. We respond to God’s will, whatever it might be. And my big responsibility is to follow that, to assure that the Society is really following God’s will. Thus, it’s done through a flexible structure that trusts in every person who shares the mission and its roots in Christ. And we try together to find the way that God is showing us.

That’s why in the last years we are deepening discernment in common, not only discernment as a personal process but discernment of the body. We need to hear as a body, the Spirit.

CD: You have this amazing, diverse group of people who are doing so many cool and different things. But at the same time, at least in the U.S. and Europe, vocations have been going down. I’m wondering what your vision of the Society is in the next 10 to 20 years.

This is an amazing characteristic of the Society of Jesus: We are so diverse, and this diversity is growing.

The Society of Jesus will be integrated by a greater variety of cultures, living in and witnessing interculturality. This is an amazing characteristic of the Society of Jesus: We are so diverse, and this diversity is growing. We have people from I don’t know how many cultures, living the same vocation, in the same Spirit. And our big challenge is to enrich ourselves from that variety or diversity.

We will be a Society of Jesus, adapting to the lifestyles, to the works, to the demands of a better balance with the environment. That, I think, is a big challenge for our life: how we embody as a big group of persons—in many places of the world, coming from different cultures—how we can be witness of a new way of relationship with the environment.

Listen to the full interview: