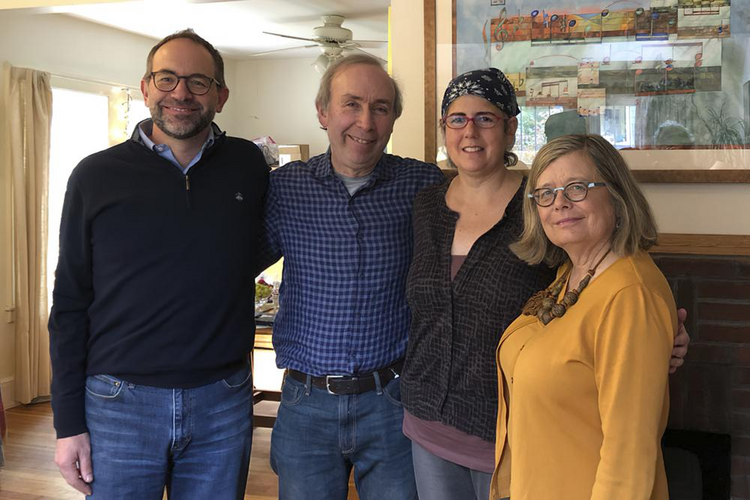 Rachel Zoll, who for 17 years as religion writer for The Associated Press endeared herself to colleagues, competitors and sources with her warm heart and world-class reporting skills, died Friday in Amherst, Massachusetts, after a three-year bout with brain cancer. She was 55.

Zoll covered religion in all its aspects, from the spiritual to the political, and her stories reached a global audience. But her influence was far greater than that. Other publications often followed her lead, and AP staffers around the world depended on her generosity and guidance.

Zoll covered religion in all its aspects, from the spiritual to the political, and her stories reached a global audience.

“Rachel was one of the most universally beloved colleagues we had,” said AP’s managing editor, Brian Carovillano. “She was also one of the best reporters, on any beat. ... She had a knack for finding the story or angle that no one else considered but is packed with insight and surprises.”

“Most importantly,” he added, “she was always the best kind of colleague, always available for help or consultation. ... She always had time for everyone.”

Zoll was at the forefront of coverage of two papal transitions, the clergy sex abuse scandal in the Catholic Church, and tensions within many denominations over race, same-sex marriage and the role of women.

She often broke news, as in 2014, when she was the first to report Pope Francis’ appointment of Blase Cupich to become the new archbishop of Chicago.

But she also told stories in depth: a 2016 election-year piece examining how conservative Christians felt under siege in a changing nation. A series about Christian missionaries from Africa launching initiatives in the United States. A feature about two churches in Georgia -- one black, one white -- trying to bridge build a connection by confronting racism.

Not all of her stories were so heavy. In 2005, she reported from Tullahoma, Tennessee, on a Bible study class called “Finding the Way Back to Mayberry” developed by two men who believed watching “The Andy Griffith Show” could lead to spiritual enlightenment.

“Mayberry may be fictitious, but its lessons are not,” preacher Pat Allison told Zoll.

Her work was honored repeatedly by the Religion News Association; it gave her a Special Recognition Award in September 2018, saluting her work over the years and her collegiality.

“She was one of the great personalities in the profession –- or really anywhere,” said RNA contest chairman Jeff Diamant at the awards banquet. “This makes it really hard to get mad at Rachel Zoll, even when she beats you on a story in your hometown.”

Frank Baker, who was Zoll’s editor when she joined the AP’s Providence office in 1996, nominated her for the AP’s most prestigious in-house honor -– a Gramling Award, which she won in 2018

“I’ve worked with countless outstanding journalists. None is better than Rachel,” wrote Baker, now AP’s news editor for California. “She never gets outworked. She never gets intimidated by a subject. And she never loses her sense of humor.”

Zoll, who earned a bachelor’s degree from Tufts University and a master’s from the Columbia University School of International and Public Affairs, worked in her hometown at The Salem (Mass.) Evening News before joining the AP in Boston in 1995.

Laurie Goodstein, The New York Times’ religion writer from 1997 to 2019, said Zoll was revered by her competitors on the beat.

“Rachel mastered the art of interrogating powerful religious leaders and holding them to account without being confrontational or disrespectful,” said Goodstein, now the Times’ deputy international editor.

“She would go to the microphone at a press conference, face a panel of Catholic bishops peering down from a dais, and ask the pivotal question that cut right to the heart of the matter,” Goodstein said via email. “Then amidst the hubbub in the press room, she would hammer out a clear, even-handed, compelling story on the religious controversy of the day.”

One of Zoll’s frequent sources was the Rev. James Martin, a Catholic priest who is editor-at-large of the Jesuit publication America.

One of Zoll’s frequent sources was the Rev. James Martin, a Catholic priest who is editor-at-large of the Jesuit publication America. He recalled her laughter, staccato-like and frequent.

“Rachel was not only an amazing reporter, who was dogged in her pursuit of a story, but a wonderful person: warm, smart, funny,” Martin told the AP. “Sometimes when she called me for a story, we spent more time laughing than talking about the story.”

Zoll became ill in January 2018 as she was helping negotiate a major expansion of AP’s religion coverage via a grant from the Lilly Endowment. A few weeks later, she was diagnosed with the incurable cancer glioblastoma.

Even after that diagnosis, her years of source-building and intricate preparation ensured that AP was first to receive the news of the death of renowned evangelist Billy Graham on Feb. 21, 2018.

Zoll was born in Salem, where her father, Samuel Zoll, served as city councilor and mayor before embarking on a judicial career that included 28 years as chief justice of the Massachusetts District Courts. He died in 2011.

She is survived by her mother, Marjorie Aronow Waldman; three older siblings and their spouses -- Barry Zoll and his wife, Susan; Cheryl Zoll and Eric Sawyer, and Risa Zoll and Tim Williams; and five nieces.

Cheryl said her sister had other talents, beyond journalism -- she was a gifted musician. Over the years, she played piano, French horn and trumpet.

She even joined an all-woman accordion orchestra -- the Main Squeeze. In 2006, she recalled a performance at a New York venue when one band member took a sledgehammer to a squeezebox.

“There were times in the first year or so when I wanted to quit. I felt humiliated onstage,” she wrote. “But then I realized that no matter how many times we bombed, it was always great to step outside the dead-seriousness of adulthood and do something ridiculous like playing James Brown with 14 other accordionists while a friend smashed an instrument into pulp in front of a crowd.

“That night at Irving Plaza, I realized how lucky I am: I’m with the band.”