Pope Francis: God does not distinguish between natives and foreigners 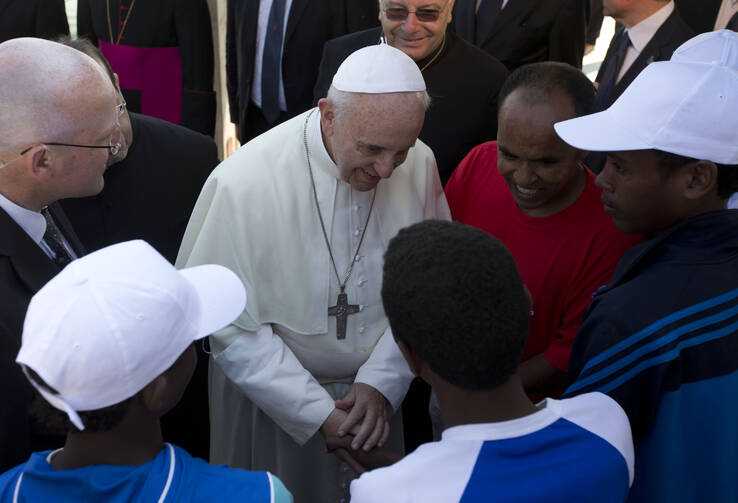 In this July 8, 2013 file photo, Pope Francis speaks to migrants, some wearing white caps, during his visit to the island of Lampedusa, southern Italy. Pope Francis on Thursday, May 6, 2021 denounced “aggressive” nationalism that rejects migrants and demanded that Catholics follow the Gospel-mandated call for an inclusive, welcoming church that doesn’t distinguish between “natives and foreigners, residents and guests.” (AP Photo/Alessandra Tarantino, pool)

ROME (AP) — Pope Francis on Thursday denounced “aggressive” nationalism that rejects migrants, and said Catholics should follow the Gospel-mandated call for an inclusive, welcoming church that doesn’t distinguish between “natives and foreigners, residents and guests.”

Francis made the appeal in his annual message for migrants and refugees. He said the current pandemic had shown how the concept of the human family had been “fragmented, wounded and disfigured,” with the poorest and most marginalized paying the highest price.

The universal “we," he said, “is crumbling and cracking due to myopic and aggressive forms of nationalism and radical individualism.”

Pope Francis said Catholics should follow the Gospel-mandated call for an inclusive, welcoming church that doesn’t distinguish between “natives and foreigners, residents and guests.”

He demanded that Catholics in particular actually act “catholic” in the universal sense, noting that migrants and refugees enrich the faith, the church and one another.

Francis has made outreach to migrants and refugees a priority of his papacy. His first trip as pope was to the Sicilian island of Lampedusa, ground zero for Europe’s migrant crisis. He has visited refugee camps on his foreign visits and once brought a dozen Syrian refugees back home with him aboard the papal plane.

His appeals for governments to welcome migrants have often fallen on deaf ears in Europe and the U.S., particularly amid the growth of nationalist political movements.

“Ours must be a personal and collective commitment that cares for all our brothers and sisters who continue to suffer,” he said. “A commitment that makes no distinction between natives and foreigners, residents and guests, since it is a matter of a treasure we hold in common.”