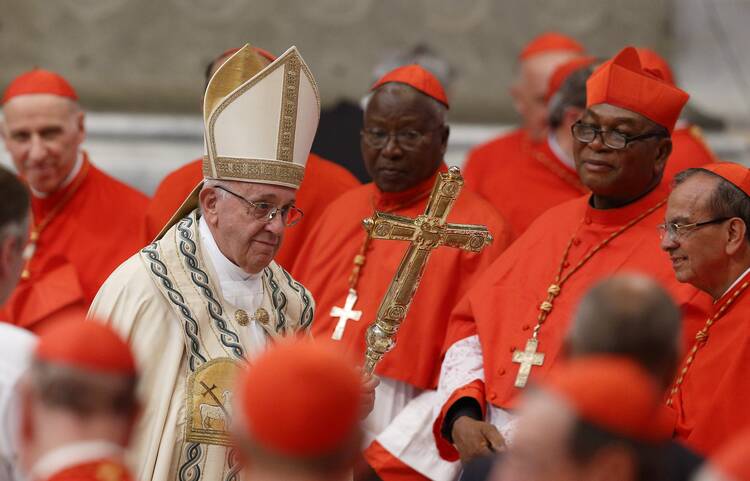 Pope Francis leaves after a consistory to create 14 new cardinals in St. Peter's Basilica at the Vatican in this June 28, 2018, file photo. The pope has updated rules for the Vatican court system so that cardinals and bishops accused of a crime can now be tried by the Vatican City court, just like priests and laypeople can be. (CNS photo/Paul Haring)

Pope Francis has introduced a significant change to the law of the Vatican City State by granting jurisdiction to its ordinary tribunals to judge cardinals and bishops, like all the other faithful, in civil and penal matters. These tribunals, however, will have to obtain the prior assent of the pope.

He issued this decree on his own initiative—in a new motu proprio—on April 30. It establishes that all the faithful, including cardinals and bishops, are to be considered equal in dignity before the law and that no one is to enjoy special privileges in matters of law.

Francis had hinted that this change was coming when he addressed the inauguration of the judicial year in the Vatican City State on March 27. In today’s decree, he recalled what he said then, when he emphasized “the overriding need for the current procedural system—also by means of appropriate changes in the law—to ensure the equality of all members of the Church and their equal dignity and position, without privileges that date back to earlier times and are no longer in keeping with the responsibilities that each person has in building up the Church.”

With today’s decree, Pope Francis abolished privilege in matters of civil and penal matters, making it possible for ordinary Vatican tribunals to judge cardinals and bishops.

With today’s decree, however, Pope Francis abolished this privilege in matters of civil and penal matters, making it possible for ordinary Vatican tribunals to judge cardinals and bishops once the pope has given his consent. It is worth mentioning that the Vatican courts are presided over by judges without a jury. The court of first instance is composed of three lay judges.

Where else will Pope Francis travel in 2021?
Gerard O’Connell

The clause in the new motu proprio is similar to what prevails in the legal systems of many countries, where the courts have to obtain the approval of the parliament or congress to bring heads of state or government ministers to trial.

The timing of the motu proprio is significant. It comes on the eve of the completion of the investigation by the Vatican magistrates into questionable operations involving Vatican officials, including Cardinal Angelo Becciu, and Italian financial agents in the purchase of the Sloane Avenue property in London.

Sources expect prosecutors to file charges within the next month in this case. If, as some in Rome expect, the cardinal is likely to also face charges, then today’s decree opens the way for him to stand trial along with the others who may be charged.

This change in the Vatican City State law will take effect the day after it is published in L’Osservatore Romano. That should mean May 2.