Italian bishop-elect shot in his home in South Sudan 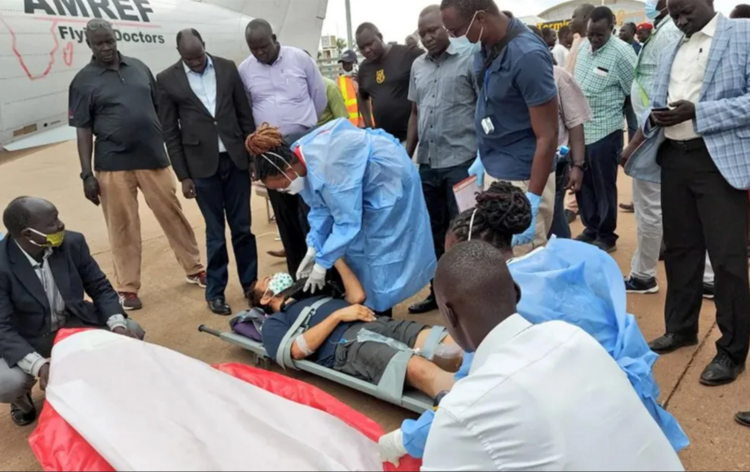 Medical professionals prepare the Rev. Christian Carlassare, on stretcher, to be airlifted to Kenya’s capital, Nairobi, through the services of the African Medical and Research Foundation for specialized treatment after the priest was shot April 26, 2021, in South Sudan. (Photo courtesy of ACI Africa)

(RNS) — An Italian Roman Catholic priest sent two months ago to lead the Diocese of Rumbek, in South Sudan, was seriously injured Monday (April 26) by gunmen who stormed the priest’s residence and fired at least 13 bullets.

The attack on the Rev. Christian Carlassare sent shock waves through the Christian community in South Sudan and highlighted the risks clergy assume in serving in the conflict-ridden East African nation.

The missionary was airlifted from Rumbek to a hospital in Nairobi, Kenya, and is stable after several blood transfusions, Vatican officials said. South Sudanese church officials expressed optimism, noting that the shots did not fracture Carlassare’s bones.

The Vatican said that Pope Francis is praying for Carlassare, a 43-year-old Comboni Missionary priest who was set to become the world’s youngest Italian bishop on May 23.

An Italian Roman Catholic priest sent two months ago to lead the Diocese of Rumbek was seriously injured Monday by gunmen who stormed the priest’s residence.

The diocese’s bishopric fell vacant in 2011 after the death of Bishop Caesar Mazzolari. Before Carlassare’s appointment, he had been serving in the Diocese of Malakal, in the country’s northeast.

South Sudan, which will celebrate the 10th anniversary of its secession from Sudan in July, has been engulfed in a civil war since its independence as ethnic groups fight for advantage.

Christians make up roughly 60% of the population, according to a Pew Research Center on Religion and Public Life report in 2012, with Roman Catholics making up the majority but a sizable number of Anglicans also in the country. In a message on Christmas Eve, Francis joined with Anglican Archbishop of Canterbury Justin Welby to exhort the country’s Christians to support peace and reconciliation.

Some have suggested that the attack may have been a warning for the Catholic Church to keep out of the political disputes in South Sudan.

The Catholic Church has acted as a mediator for the complex peace negotiations between the opposing Dinka and Nuer tribes, and previous South Sudanese bishops have played a crucial part in promoting cease-fires. Ecumenical efforts, including by the South Sudan Council of Churches, have been instrumental in fitful periods of peace.

In what has become one of the most iconic moments of this pontificate, Pope Francis knelt and kissed the feet of President Salva Kiir Mayardit and opposition leader Riek Machar during their visit to the Vatican in April 2019, begging them to restore peace.

In June of last year, an Anglican priest, the Rev. Daniel Garang Ayuen, was killed in an attack in which the cathedral of the Diocese of Athooch and a local village were set ablaze. In 2018, a Kenyan-born Catholic priest, the Rev. Victor Luka Odhiambo, a Jesuit, was murdered in the northwest of the country. In 2017, Pentecostal Bishop Joel Mwendwa was killed in Juba, allegedly for being too noisy.

Some have suggested that the attack against Carlassare may have been a warning for the Catholic Church to keep out of the political disputes in South Sudan and deter a papal visit.

On Monday at 1 a.m., two men entered Carlassare’s home in Rumbek, the country’s former capital, about a six-hour drive north of Juba, the current capital, and began firing.

As photographs of the wounded priest circulated online, Francis expressed his closeness to Carlassare through Vatican spokesman Matteo Bruni on Tuesday. Carlassarre was reportedly quick to forgive his aggressors, whose motives remain unknown, telling local media outlets that he carries “no grudges” and asking for prayers “for the people of Rumbek who suffer more than I do.”

On Monday at 1 a.m., two men entered Carlassare’s home in Rumbek, the country’s former capital, about a six-hour drive north of Juba, the current capital, and began firing.

“The conference … is saddened by hearing the … news of shooting one of their brothers at his home,” said Roman Catholic Bishop Tombe Trille Kuku, president of the Sudan and South Sudan Conference of Catholic Bishops.

Roman Catholic Archbishop Stephen Ameyu of Juba expressed his shock, saying Carlassare’s appointment as bishop was welcomed and celebrated by the clergy and the community.

“When he was elected, everyone was happy. He had also received a wonderful reception on arrival in Rumbek,” Ameyu told Religion News Service. While clergy have been regularly attacked in South Sudan, he said, violence has touched many people’s lives.

“We are not an exception,” Ameyu said. “We knew it was just a matter of time before one of us is targeted.”

“We need your prayers as shepherds of the flock … who have dedicated the lives for the service of the people (and) become targets of unknown gunmen who seem wanting to destroy the mission of God,” said Roman Catholic priest James Oyet Latansio, who is the general secretary of the South Sudan Council of Churches.

The country’s persistent insecurity is attributed to the many small arms and light weapons in the hands of civilians. The guns are used for cattle raids, assassinations, abductions and revenge attacks.

“In revenge attacks related to killings, the attacks have targeted very senior people. By so doing they feel the death has been properly avenged. That’s how some clergy, including bishops, have become targets,” said African Inland Church Bishop Arkanjelo Wani Lemi, also the chairman of the South Sudan Council of Churches.

In July 2020, Kiir launched a civilian disarmament campaign across the country, but communities resisted the move on grounds that without the guns, they were vulnerable to attacks by others still keeping theirs.

According to the Voice of America, authorities have arrested 20 people in their investigation of Monday’s attack, including several Catholic priests and law enforcement officers.

“We have arrested 20 people currently under our custody, including some of our police personnel who were assigned there, including priests and the staff of the diocese who were around the crime scene. Up to now we are investigating the crime; we shall establish the motive very soon,” Lakes State police spokesperson Captain Elijah Mabor Makuac told VOA’s “South Sudan in Focus” program.

Frederick Nzwili - Religion News Service
Provide feedback on this article
Join the conversation: Login or create an account
Before you can comment, you need to update your profile to include your first and last name, as required in our comments policy. Then reload this page and you'll be set up for commenting. Update your profile