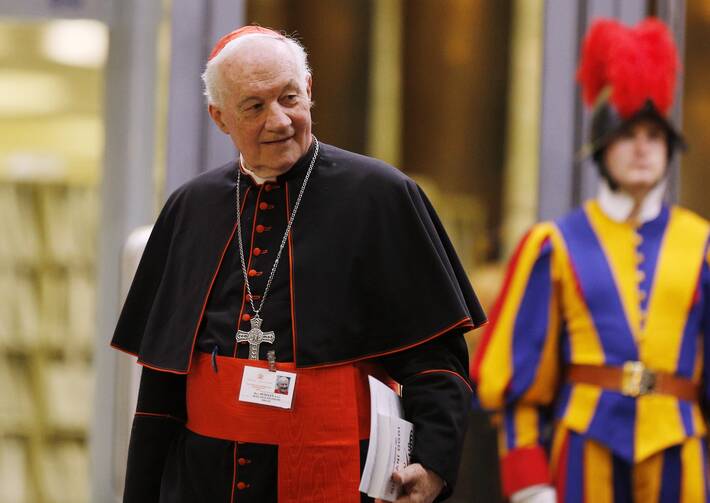 Cardinal Marc Ouellet, prefect of the Congregation for Bishops, leaves the opening session of the Synod of Bishops on young people, the faith and vocational discernment at the Vatican in this Oct 3, 2018, file photo. Cardinal Ouellet announced plans for a major international conference at the Vatican in 2022 on the theology of the priesthood. (CNS photo/Paul Haring)

When Father John Wester received a call just before 8 a.m. Mass, he had no idea it would be the nuncio, the pope’s ambassador, phoning to tell him he would be the next auxiliary bishop of San Francisco.

“I think my knees were knocking,” now-Archbishop Wester of Santa Fe, N.M., told America’s “Inside the Vatican” podcast. The bishop said his parishioners told him, “‘You don’t look very good, Father!’ and I said, ‘Well, I don’t feel very good right now!’ It was kind of a shockeroo.”

Archbishop Wester’s story is not unusual. Most bishops are appointed without ever knowing they were being considered for the job and are caught by surprise when chosen.

The bishop selection process is perhaps the most secretive hiring process in the world, shielded from both the candidate and the priests and people he will serve. Those who are consulted about possible candidates are required to return the list of questions they’ve been sent, because even the questions, which reveal no particulars about a candidate, are protected under the Vatican’s top confidentiality classification: the “pontifical secret.”

There is a joke among the hierarchy that “a pontifical secret is a secret you don’t tell the pope,” but the secrecy around this process has been chipped away in recent years. On this episode of "Inside the Vatican," working from a copy of the revised survey that he obtained, America's Vatican correspondent Gerard O'Connell summarizes some of the questions that the Vatican is now asking about possible bishops.

This isn't the first time details of the secret questionnaire have been revealed: In 1984, Thomas J. Reese, S.J., then the editor of America magazine, obtained the survey that the nuncio sends out to gather information on candidates. He published it, in full, in America.

The biggest blow to the secrecy around how bishops are appointed, though, came from the Vatican itself. Last fall, it took the unprecedented step of revealing how former Cardinal Theodore McCarrick, who was removed from the college of cardinals and from the priesthood for abusing minors, managed to rise through the ranks despite rumors circling about his sexual misconduct.

The Vatican’s 460-page report detailed who supported Mr. McCarrick’s promotion to archbishop and soon after, cardinal-archbishop, of Washington, D.C., along with who opposed it and who withheld information about his abuse.

The McCarrick report was the most significant glance the Vatican had ever given into the process of making a bishop, and already there are calls for similar reports on others involved in abuse or cover-up.

America’s Vatican correspondent, Gerard O’Connell, said on this week’s episode of “Inside the Vatican,” that “the McCarrick report put a silver bullet through the pontifical secret.... It has explained largely how the system failed from down low to high up.”

To understand that failure, one first needs to understand how the system works. In this epiosde, Father Reese walks host Colleen Dulle through the official process of choosing a bishop, and Gerry explains where that process went awry in the case of Cardinal McCarrick.

But is the McCarrick case an example of what goes wrong when someone fails to cooperate with the system, or does it reveal weaknesses inherent to the system itself—one that is shrouded in secrecy and relies on an honor system that can be betrayed?

“It’s part of the human reality that we do not have a perfect system, an infallible system, and we will not have one,” Gerry says on the show. “So what you try to do is produce a system that eliminates to the greatest possible degree errors or mistakes.”

Pope Francis has tried to create such a system by having the secret questionnaire that is sent out to bishops rewritten, expanding it from one page to four and including specific questions about abuse and cover up. Gerry summarizes some of those questions on this week's episode.

Finally, calls for laypeople to have more of a voice in the selection of bishops have come from inside and outside the church. Pope Francis has asked nuncios to reach out to a wide variety of people, including clergy, religious and laypeople, when gathering feedback. Some lay groups say that consulting with laypeople needs to be a required step in the process.

Colleen speaks to Kerry Robinson of Leadership Roundtable, an organization founded in the wake of the 2002 sexual abuse crisis that fosters collaboration between bishops and laypeople in the areas of church management, finances, communications and human resources.

Although Leadership Roundtable has not called for any changes to the bishops’ appointment process, Ms. Robinson stresses the importance of diverse voices: “We need to solve for our own myopia,” Ms. Robinson says. “If I were in charge of appointing bishops, I would want desperately for as much informed advice and opinion as possible.”

Gerard O’Connell | Deep Dive: The McCarrick Report and the popes it implicates

Can the Catholic Church find a better way to choose bishops?

1
Explainer: Padre Pio and the (controversial) history of the stigmata
Jill Rice
2
I crossed the U.S.-Mexico border to save my son. This is my story.
V.A. García
3
Cardinal Grech: The synod ‘needs time’ on the question of married priests
Gerard O’Connell
4
Archbishop Cordileone: It is past time to strike down the death penalty
Archbishop Salvatore Joseph Cordileone
5
The sin of complacency
Cristobal Spielmann