Pope Francis overjoyed at receiving over 100,000 video messages of support from Argentinians 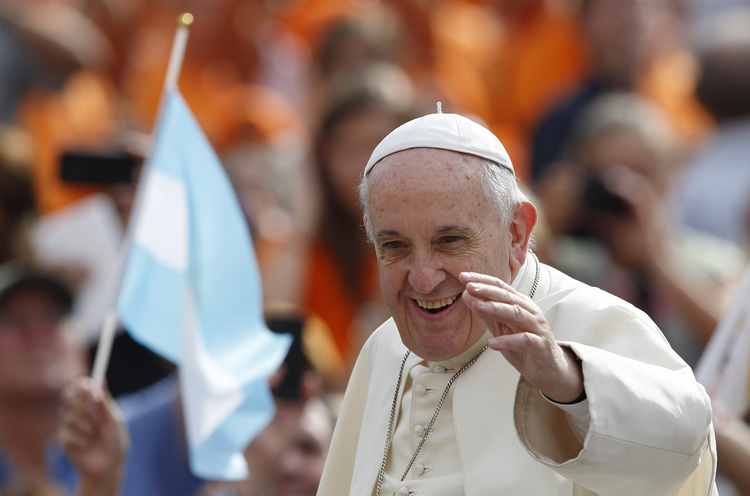 Pope Francis said today that he was deeply moved and encouraged at having received more than 100,000 small video messages of thanks and support on the eighth anniversary of his election as pope.

“Something happened that I did not expect and for which I wish to express my gratitude,” he said, revealing his surprise and joy in a video message to the “Generación Francisco” (“Generation Francis”) group in his homeland. The group, which was founded in 2014 with the aim of putting his words into action—promoting the culture of encounter and working with the poor—released his message in Buenos Aires today.

He noted that the members of this group are scattered among church communities throughout the country. They include many living in shantytowns, people who go on pilgrimage to the famous Marian shrines at Luján or San Nicolás, sportsmen and women, and those in positions of authority.

“They reflected on how they could commemorate my eight years as pope. They came together to tell me that they are happy with these eight years [of the pontificate], that they are praying for me and are accompanying me. This is the voice of the people,” he commented.

Pope Francis said today that he was deeply moved at having received more than 100,000 small video messages of thanks and support on the eighth anniversary of his election as pope.

He explained that the messages came from “an ideal group, who do not know each other but are united by good desires and have called themselves ‘Generación Francisco,’ and, in some way, follow the things that I do and the things I say. They more or less love me and do not insult me or speak badly about me but use the things that I say to do good.”

Francis’ is well aware that there are people in Argentina who “insult” him or “speak badly” about him because of his ongoing criticism of the enormous social and economic inequalities in the country and his advocacy for the poor and marginalized, especially migrants. These are people who denounce him as being “left wing” and supportive of left-wing governments, even though when he was archbishop of Buenos Aires, the leadership of the left-wing Nestor Kirchner government labeled him as “the leader of the opposition.”

Many also criticize him for his rejection of abortion or for writing to prisoners in jail, while at the same time many politicians have sought to get a photo with him to help them in their election campaigns.

Many, too, now criticize him for not visiting his homeland since becoming pope.

The first Argentinian pope knows he has vocal critics in his homeland, but he also knows that there are many who support and pray for him but are often less visible. Hence his surprise and joy at this public expression of support from the Generación Francisco group.

The first Argentinian pope knows he has vocal critics in his homeland, but he also knows that there are many who support and pray for him but are often less visible.

Francis identified “Padre Pepe” as the “inspirer” of this vast expression of support. The Rev. Pepe Di Paolo is a famous Argentinian priest who works in the “villas,” or shantytowns, of Buenos Aires. Then-Cardinal Jorge Bergoglio, as the city’s archbishop, publicly supported him when drug barons threatened to kill him for his anti-drug campaign among the young people in the villas.

In the video message, the Jesuit pope said: “Padre Pepe is a priest who is capable of mobilizing people and capable of moving hearts, because he is authentic. Everyone knows him.” He commended the priest and those who coordinated these messages of support for having “consulted the people.”

He went on to emphasize that it is important that those who govern should “consult the people.” Bishops and parish priests should do so, too; it is “synodality,” the pope said.

He underlined that it is also important that those who govern in the provinces or in the central government should also consult the people. And here he indirectly criticized the Argentine government for failing to do so on important moral questions, alluding to its failure to do so when it legalized abortion last December.

He concluded by thanking Padre Pepe for having consulted the Generación Francisco “about what they think of this pope and for getting each one to say what he or she thinks, and then sending me their messages.” He thanked the more than 100,000 who did so for their messages and “closeness” to him and assured them that he is close to them in his heart.