Good Friday homily: Did God the Father demand the death of his Son? 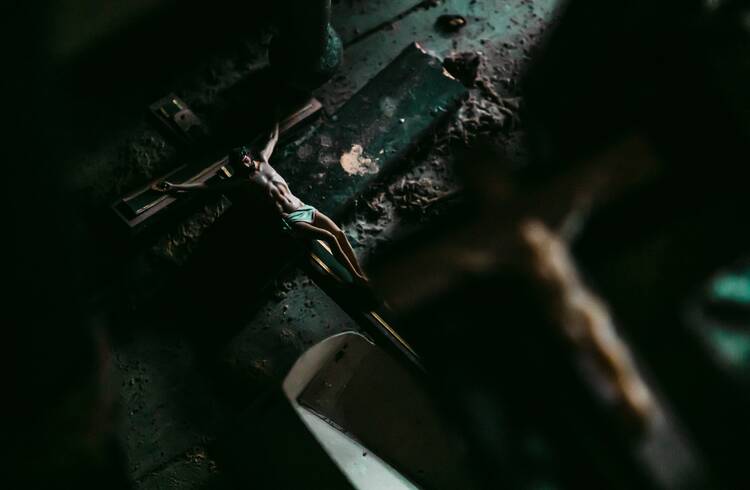 Photo by David Knox on Unsplash

A Reflection for Good Friday

A common, though rather shallow, criticism of Christianity is the image of God the Father that some find in the story of Christ’s death. What sort of God would demand the death of his only Son before forgiving us?

Of course, a father who, for some good reason, gives a son a potentially dangerous task wills the possible acceptance of harm. Perhaps, for example, even more lives would be endangered if the work was not completed. So, while God the Father did not will the death of the Son, we can still ask why the Father permitted it. The answer lies in the act of our creation.

In creating us, God fashioned a will and a freedom that stand apart from God’s own self. This was the great adventure: to create that which could be called into God’s life of love. But you cannot call others into love without granting them the possibility of rejecting it. One could say—and history, both human and environmental, bears this out—that God puts all of creation at risk in creating us, fashioning the one part of creation that can and did reject God.

God suffered no loss by our sin. There was nothing we could do to harm God. But if God does not want us to suffer the consequences of our misuse of freedom, then God must radically refashion humanity to choose again. God does this by entering humanity, becoming who we were meant to be.

St. John gives us a Christ who, in the power of the Spirit infusing his humanity, thirsts to do the will of the Father, to carry it to completion

God the Father thus wills the Incarnation and the solidarity it creates with us. “For God so loved the world that he gave his only Son, so that everyone who believes in him might not perish but might have eternal life” (Jn 3:16). God the Son embraces this mission into the world. “I came down from heaven not to do my own will but the will of the one who sent me” (Jn 6:38).

No New Testament author is clearer on this point than St. John. If you want to know and understand the Father, you must look to the Son.

Consistently, with subtle brilliance, John turns a commonplace remembrance into a revelation of the sublime. Mark and Matthew record Jesus being given a sponge, soaked in vinegar, just after he cries out, “My God, my God, why have you abandoned me” (Mt 27:48; Mk 15:36). John records Christ as saying, “I thirst” (Jn 19:28).

The Father wills solidarity with sinners.

Remember, the Gospels are not composed for the curious. (Indeed, in the persons of King Herod and Pontius Pilate, they chide the curious who will not commit.) No, the Gospels are addressed to believers who will ponder them in faith. Isaiah, Ezekiel, Joel and Zechariah all spoke of God pouring out his spirit to redeem and renew his people. Earlier in his dialogue with the Samaritan woman at the well, Jesus also identifies the Holy Spirit with living water (4:10, 13-14). And now, St. John gives us a Christ who, in the power of the Spirit infusing his humanity, thirsts to do the will of the Father, to carry it to completion:

After this, aware that everything was now finished,
in order that the Scripture might be fulfilled,
Jesus said, “I thirst.”

There was a vessel filled with common wine.
So they put a sponge soaked in wine on a sprig of hyssop
and put it up to his mouth.

The Father wills solidarity with sinners. To enter a world suffused with sin is to accept a whirlwind of dissolution, darkness, dreadful agony and death. The sin of the world sunders the very life of the Son.

Yet the Son still thirsts to do the will of the Father. Jesus hands over the Spirit, and the Father responds by showering the Spirit upon all of creation. Each member of the Trinity is poured out.

In eternity, the Father and the Son give all that they are to each other. The Father gives all to us when he sends the Son. The Son, the human and divine Son, even in the whirlwind of sin, offers himself back to the Father. The result is both Father and Son pouring themselves, in the person of the Holy Spirit, into our lives.