On his first day in Iraq, Pope Francis encouraged its leaders to embrace its religious and ethnic diversity 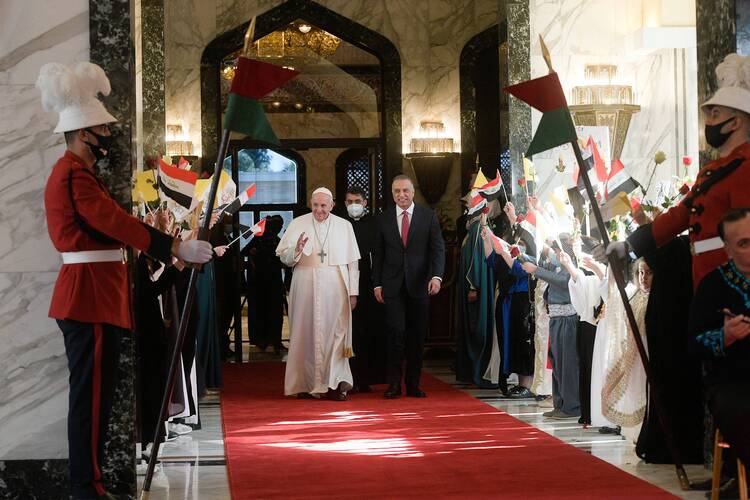 Defying the pandemic and the security risks, Pope Francis finally stepped onto Iraqi soil at Baghdad international airport at 12:45 p.m. on March 5, realizing a visit that he had desired from the beginning of his pontificate and that had evaded his predecessors.

“It was a duty to come to this land that has been martyred for so many years,” he told the 74 journalists from 15 countries, all wearing masks and like him also vaccinated, that accompanied him on the four-and-a-half-hour flight from Rome.

After being welcomed at the airport by two Iraqi children who presented him with flowers and the country’s prime minister, Mustafa al-Kadhimi, he was driven in a bullet-proof car to the city on this nice sunny day. As he drove to the city, he could see several small groups of people waving Vatican and Iraqi flags, and many posters with his photo and the words “Welcome Pope Francis to Mesopotamia!”

Shortly after his arrival in the city, he was given a warm reception at the heavily guarded presidential palace from President Barham Salih. After greeting the members of the government, he and the president spoke in private before addressing some 150 representatives of the country’s civic and religious authorities, as well as the diplomatic corps.

“It was a duty to come to this land that has been martyred for so many years,” the pope told the 74 journalists from 15 countries that accompanied him on the four-and-a-half-hour flight from Rome.

The Iraqi president, speaking first, welcomed Francis by recalling that when they met in the Vatican, “I noted how he followed the news and suffered at the tragedy that the Iraqis were experiencing and the affliction they had borne because of the wars, the violence and foreign interference.” He told the pope, “the Iraqis rejoice at your presence, as a great and dear guest, who has also come notwithstanding the recommendations to postpone the visit because of the exceptional situation the world is going through because of the pandemic, and in spite of the difficult conditions our wounded country is going through.”

“To have overcome all these circumstances in actual fact doubles the value of your visit in the view of the Iraqis,” he said.

President Salih went on to recall that notwithstanding periods of violence, for many centuries Christians, Jews and Muslims and the followers of other religions had lived together in peace in this land, and he expressed his hope that this, too, would be their future. He denounced the abuse of religion for violence and said the country would not have fully recovered from the nightmare of recent decades until the return to Iraq of the Christians who had fled out of fear.

Then, in the great hall of the palace in the heart of Baghdad, a city of almost seven million people, founded in 762 A.D, Pope Francis delivered his first message to the Iraqi authorities and the entire nation, which was transmitted on national television.

Mr. Halkawt Al Chalabi, a member of the organizing committee for the press for this visit, said that “all Muslims and Christians were following the pope on television. His visit is the most important event for years. We Iraqis have suffered much in recent decades from wars, invasion, anarchy and the brutality of the Islamic State, and we were totally isolated. The arrival of the pope with a message of peace opens the frontiers, not only for us but for the whole region.”

After expressing his joy at finally being there, Francis made a passionate appeal for an end to the violence that has wreaked havoc on this land in recent decades. “I come as a penitent,” the pope said, “asking forgiveness of heaven and my brothers and sisters for so much destruction and cruelty” and for all that Iraqis had suffered as a result of “the disastrous effects of wars, the scourge of terrorism and sectarian conflicts often grounded in a fundamentalism incapable of accepting the peaceful coexistence of different ethnic and religious groups, different ideas and cultures.”

All this, he said, “has brought in its wake death, destruction and ruin, not only materially: The damage is so much deeper if we think of the heartbreak endured by so many individuals and communities and wounds that will take years to heal.”

“I come as a penitent,” the pope said, “asking forgiveness of heaven and my brothers and sisters for so much destruction and cruelty” and for all that Iraqis had suffered.

He mentioned, in particular, “the Yazidis, innocent victims of senseless and brutal atrocities, persecuted and killed for their religion, and whose very identity and survival was put at risk.”

Then with a view to the future, he told them: “I come as a pilgrim of peace in the name of Christ, the prince of peace. How much we have prayed in these years for peace in Iraq!” He recalled how St. John Paul II “spared no initiatives and above all offered his prayers and sufferings for this intention,” alluding to his predecessor’s great effort to prevent the U.S.-led coalition’s invasion of Iraq in March 2003.

Speaking with passion, he said: “May the clash of arms be silenced! May their spread be curbed, here and everywhere!” He also called for an end to “the partisan interests” as well as “those outside interests [that are] uninterested in the local population.” It was a significant statement given the various “outside interests” of countries as well as companies that are seeking to gain access to the oil wealth of this land but show little concern for the well-being of its population.

Pope Francis strongly encouraged the building of democracy that had begun in 2005 after the fall of Sadam Hussein’s regime but which still has a long way to go. He urged the civic authorities to listen to “the voice of builders and peacemakers” as well as to “the humble, the poor, the ordinary men and women who want to live, work and pray in peace.”

Speaking with passion, Pope Francis said: “May the clash of arms be silenced! May their spread be curbed, here and everywhere!”

He reminded those in power that to build a strong democracy “it is essential to ensure the participation of all political, social and religious groups and to guarantee the fundamental rights of all citizens” and ensure that “no one be considered a second-class citizen.” He emphasized the need to respect “religious, cultural and ethnic diversity,” which has been the tradition of this land that was “a cradle of civilization, closely linked through the patriarch Abraham and a number of the prophets to the history of salvation and to the great religious traditions of Judaism, Christianity and Islam.”

He told them that “only if we learn to look beyond our differences and see each other as members of the same human family will we be able to begin an effective process of rebuilding and leave to future generations a better, more just and more humane world.” This theme has been a leitmotiv of his papacy and seemingly of his visit to Iraq. It found expression in the Declaration on Human Fraternity and his encyclical “Fratelli Tutti,” both of which he referred to in today’s speech.

Drawing on the Declaration on Human Fraternity, Francis told the civil and religious leadership of this majority-Muslim country that “religion, by its very nature, must be at the service of peace and fraternity. The name of God cannot be used to justify acts of murder, exile, terrorism and oppression. On the contrary, God, who created human beings equal in dignity and rights, calls us to spread the values of love, good will and concord.”

“Religion, by its very nature, must be at the service of peace and fraternity. The name of God cannot be used to justify acts of murder, exile, terrorism and oppression.”

In his address, Pope Francis greeted, in particular, the Catholic bishops, priests, religious and faithful of Iraq and said he had “come as a pilgrim to encourage” these believers who have been here for 2,000 years. He expressed the hope that all the Christians of this land would be able to participate in the life of the nation “as citizens with full rights, freedoms and responsibilities” and be able “to journey together as brothers and sisters” with Muslims and the followers of other religious traditions and contribute to human fraternity and peace in this land.

Francis was warmly applauded when, after invoking God’s blessing on all the inhabitants of this country, he finished speaking. He then drove under heavy escort from the presidential palace to the Syrian Catholic cathedral that had been bombed in 2010.

Tomorrow, Francis will travel to the holy city of Najaf to meet the Ayatollah Sistani, the greatly revered and influential leader of Shia Muslims, who count for close to 20 percent of all Muslims and are the majority in Iraq. Notably, the grand imam of Al Azhar, Sheikh Ahmed al-Tayeb, an influential authority in the Sunni Muslim world, posted a tweet expressing his support for the pope’s visit to Iraq: “My brother @Pontifex’s historic and courageous visit to Iraq sends a message of peace, solidarity and support to all the Iraqi people, I pray to Almighty Allah to grant him success and that his trip achieves the desired outcome to continue on the path of human fraternity.”