Use this time of Lent to reorient yourself towards serving others 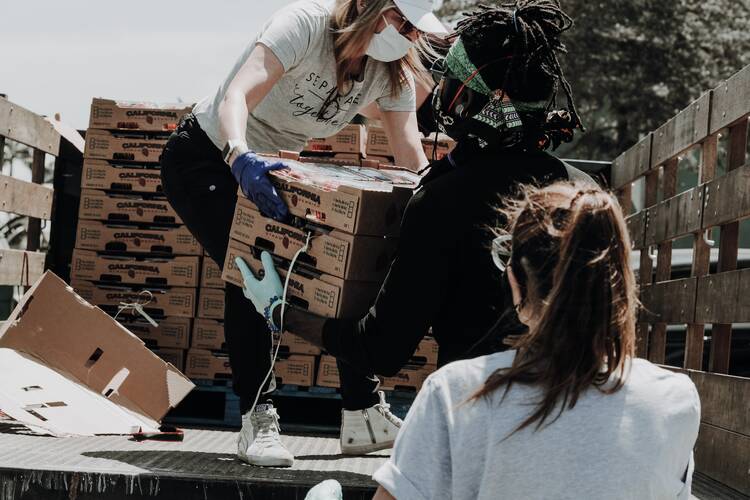 Photo by Joel Muniz on Unsplash

As Jesus was going up to Jerusalem,
he took the Twelve disciples aside by themselves,
and said to them on the way,
“Behold, we are going up to Jerusalem,
and the Son of Man will be handed over to the chief priests
and the scribes,
and they will condemn him to death,
and hand him over to the Gentiles
to be mocked and scourged and crucified,
and he will be raised on the third day.”

Then the mother of the sons of Zebedee approached Jesus with her sons
and did him homage, wishing to ask him for something.
He said to her, “What do you wish?”
She answered him,
“Command that these two sons of mine sit,
one at your right and the other at your left, in your kingdom.”
Jesus said in reply,
“You do not know what you are asking.
Can you drink the chalice that I am going to drink?”
They said to him, “We can.”
He replied,
“My chalice you will indeed drink,
but to sit at my right and at my left,
this is not mine to give
but is for those for whom it has been prepared by my Father.”
When the ten heard this,
they became indignant at the two brothers.
But Jesus summoned them and said,
“You know that the rulers of the Gentiles lord it over them,
and the great ones make their authority over them felt.
But it shall not be so among you.
Rather, whoever wishes to be great among you shall be your servant;
whoever wishes to be first among you shall be your slave.
Just so, the Son of Man did not come to be served but to serve
and to give his life as a ransom for many.”

There’s seems to be a disconnect in today’s Gospel reading. Jesus, on the way to Jerusalem, has just told his 12 disciples he will be condemned, tortured and crucified and will rise on the fourth day. And what is their response to the Lord’s preview of his death on the cross? Jockeying for the privelege to be on either side of him?

It helps to go back a few verses to understand the context. In Chapter 19 of Matthew's Gospel, Jesus tells the parable of The Rich Young Man, to which Peter responds: “We have given up everything and followed you. What will there be for us?” Jesus says when the Son of Man “ is seated on his throne of glory” his disciples will sit on 12 thrones. So perhaps it is two of these thrones that the mother of the sons of Zebedee is so eager to secure. But this promise is followed by another parable, The Workers in the Vineyard, which concludes, “the last will be first, and the first will be last.”

And yet the disciples still do not get it. And so the parable of the Workers in the Vineyard plays out among them as the 10 become indignant with the two sons of Zebedee for thinking they deserve a place of honor. Jesus says it again, this time giving a hint about what it means to be first or last: “Whoever wishes to be first among you shall be your slave.”

Clearly, it is a hard lesson for even the apostles to learn, so we can be forgiven if we so often forget it. How many of us start a career with the idea that we’re going to serve others—whether as a doctor, a public servant or even a priest—only to have that mission obscured by competition with our peers, constantly seeking advancement or holding on to power for its own sake? Maybe this Lent we can take stock of our striving and ask: Is my ambition driven by the desire serve, or do I simply want a better seat at the table?