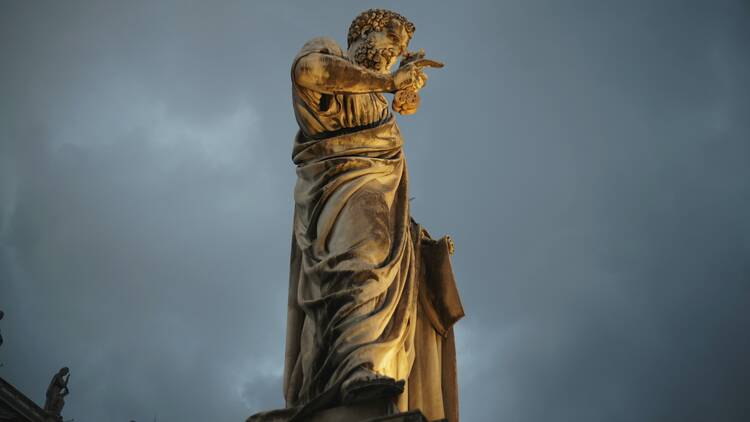 Journey with America’s editors as they reflect on Scripture, prayer, fasting and almsgiving both in written form and on “The Word” podcast.

When Jesus went into the region of Caesarea Philippi
he asked his disciples,
“Who do people say that the Son of Man is?”
They replied, “Some say John the Baptist, others Elijah,
still others Jeremiah or one of the prophets.”
He said to them, “But who do you say that I am?”
Simon Peter said in reply,
“You are the Christ, the Son of the living God.”
Jesus said to him in reply, “Blessed are you, Simon son of Jonah.
For flesh and blood has not revealed this to you, but my heavenly Father.
And so I say to you, you are Peter,
and upon this rock I will build my Church,
and the gates of the netherworld shall not prevail against it.
I will give you the keys to the Kingdom of heaven.
Whatever you bind on earth shall be bound in heaven;
and whatever you loose on earth shall be loosed in heaven.”

This well-known passage from Matthew’s gospel is the foundation of the primacy of Peter in the Catholic tradition, whose successor we know as the pope. It makes sense. Jesus puts the definitive question about his identity to his closest friends and Peter steps to the plate and professes confidently, “You are the Christ, the Son of the living God.” His reward for this recognition? A place of authority in the Christian community on earth and beyond!

This glowing reference to Peter is so well known among Catholics that we sometimes read it as if it’s the only thing we know about his character! We find security in this passage, knowing it established an immutable apostolic tradition and that we can be proud and confident today, as Peter was, in our profession of faith.

We forget that Peter’s story, like each of ours, is much more complicated. In Mark’s account of this scene in Caesarea Philippi, Peter professes Jesus’ true identity and then immediately rebukes him! (Mk 8:32-33) And Jesus rebukes him back saying, “Get behind me, Satan!” It’s the only passage in the New Testament in which Jesus refers to a person as “Satan.”

When Jesus first calls Peter in the gospel of Luke, Peter tries to get away from him, acknowledging, “I am a sinner.” (Lk 5:8) We all know how the story unfolds. Peter, the “rock,” ends up denying Jesus, the same Jesus he proudly proclaimed to be “the Christ!” Fortunately, being a sinner and a coward does not preclude a person from being a disciple of Jesus.

“I am a sinner... I’m afraid. I’m weak. I’m a hypocrite. I’m broken. Lord, depart from me.” During Lent, when we intentionally reflect on our sinfulness, Peter’s story can provide us some consolation. Jesus did not choose Peter because of his righteousness and courage. He chose Peter because he was imperfect, complicated, a sinner. Christian discipleship is not a badge of honor or a reward for some great accomplishment; it’s a recognition that sinners have a place at Jesus’ side. And having experienced mercy and healing at Jesus’ side, we have authority to testify from our own experience.