Why Catholics are so obsessed with Jesus’ death and suffering: A meditation 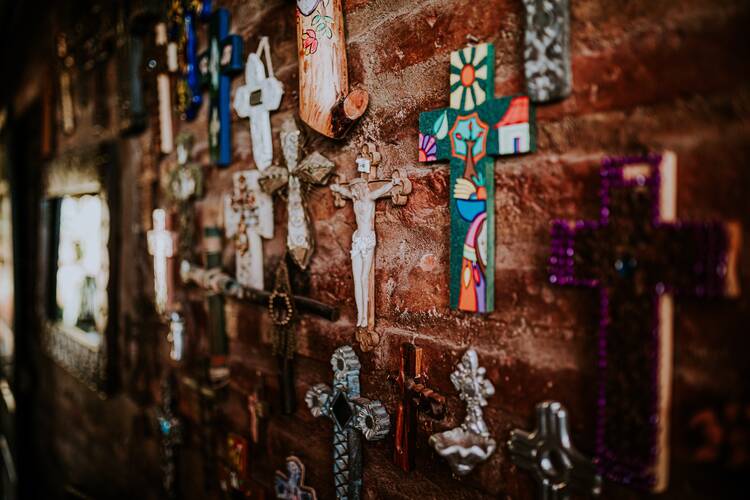 Oh the sorrows. The sorrows of life! They show up everywhere. A man speaking to a woman at a coffee shop in a college town in Northern California.

You hurt just listening to this conversation; your soul is cracked. You want to fix them both. Why such disconnection? How long will this man be asking women to wine and cheese events at, strangely enough, the women’s faculty club until one of them says yes? How long, O Lord, how long until we see thy face? What is thy face that we might see it? When will the world be made comprehensible for us? When will you lift us out of our human poverty? Or is that the point of human poverty?

How long will this man be asking women to wine and cheese events at, strangely enough, the women’s faculty club until one of them says yes? How long, O Lord, how long until we see thy face?

It is Lent, and we are not fully right, and things are not right and never have been, and we need something to make it better. At least a little bit.

The Jesus in our childhood wood-grain-brown Stations of the Cross pamphlets had no face. Jesus’ face was just a blank space of beige. Why no eyes, no mouth, no nose, no face? To unsettle us? Is it symbolic? Is it to signify that our faces are meant to be there? That we are Christ somehow? Why no face? Something is profoundly wrong with Jesus.

Why the gloom? The stomach-churning, blank-faced Jesus? Is it because the gloom and sadness will come anyway, so we might as well stop and worship it? To claim for the church that unlovely appellation “misery” before someone else tacks it on us? To get in front of, so to speak, the news cycle? To own the story before it owns us?

Why the gloom? The stomach-churning, blank-faced Jesus?

Why are we so fixed on death? Consider the Stations of Light. Have you heard of such a thing? In the Catholic Church? Stations of Light? They are real! Oh that these could become as popular as the dispiriting ones! The Stations of Light have been around for 30-some years. After 2000 years of spears and nails, we finally got around to celebrating the resurrection! Mary Magdalene runs to tell the others. Hearts are burning on the road. Fingers in wounds. Fish by the sea. Feed my lambs.

So, why don’t we wayward souls kneel solemnly before Magdalene turning and seeing the risen Lord camouflaged as a gardener? Why don’t we bow before Peter and John rushing to the tomb?

Could it be because these resurrection stories are not so dramatic and baroque? Death and the foreclaws of tragedy are always more captivating for the artist than life and joy. Or could it be because death is just so overwhelming that it sucks up any attention we might give to life?

In Francisco Zeffirelli’s miniseries “Jesus of Nazareth,” Pilate asks the Jews which one he should release—Barabbas or Jesus. Stirred up by the chief priests and the elders, the crowd bays for the release of Barabbas, while Mary tries to get them to release her son.

[Lent 2021: More reflections and podcasts from America's editors and writers]

“Jesus!” Mary shouts from the courtyard beneath the parapet. “Jesus!” as she is pushed about and stifled by the crowd. If only those people on the “Release” side had yelled hard enough! They might have won his freedom and he would not have been crucified and died. If only! We could have avoided this! It was in the realm of possibility, no?

As a child I watched this with pain. Every nail shall be counted, every wound shall be cataloged, every shove of the Virgin be filmed. Zeffirelli and Scorsese, Pasolini and Gibson, and any given Renaissance painter. The Catholic Church like some crack squad of crime fighters chalking bodies and detailing every trace of blood. It all has been measured. We worship death, no? We glory in suffering! We look at it over and over again, a Zapruder film of Christ’s passion that we can’t get enough of. Tammy, a Protestant, once told me her church doesn’t have the body of Christ on their cross. Because he’s not on that cross anymore, she said. He’s resurrected. They just have the two boards.

I’d never thought of that! Of course! He’s resurrected! Why do we have him on that cross? We have it all wrong. We should be like Tammy’s church. We should just have the two boards! That makes so much sense! Take him off. He’s risen!

Zeffirelli and Scorsese, Pasolini and Gibson, and any given Renaissance painter. The Catholic Church like some crack squad of crime fighters chalking bodies and detailing every trace of blood.

Why all this focus on the dead Jesus? Everything so somber, the ceremonies of torture, the gleaming blood of the cross. All those grim, forbidding churches: Holy Agony, Our Lady of Sorrows, Five Holy Wounds and, resting behind glass in Turin: the Shroud of Turin.

The Duccio print hanging in my room, Mary in a deep blue habit gravely holding her newborn, already mourning, while the numinous little man of him in orange gown and gray cloak pushes away her veil, perhaps comforting her because of what lies ahead. An infant who is consoling his mother because he is soon going to rip her heart out of her body. He was born, you could say, to destroy this woman, for at least a while, and he knows it. The Metropolitan Museum of Art bought this painting for $45 million. It is eleven inches tall.

It is Lent and things are fundamentally not okay, and we are desperate for something to make them better. At least close to.

It is Lent, and we are not fully right, and things are not right and never have been, and we need something to make it better. At least a little bit.

Why does the church feature death and pain and suffering so relentlessly? The 14 stations over and over and over, in season and out? Maybe because life is just a very terrible thing at times, and Christ knew it and we know it and the church seems to know it. The church is something that deals, quite unflinchingly, in reality. And that reality includes the worst things.

Why does God allow suffering? A meditation
Joe Hoover, S.J.

Even the worst things that seem, on the face of it, small, minor, not so bad. We are born into a coffee shop, and taken down in the coffee shop, gently, gently turned aside and here’s your napkin. And no offering of the right kind of foodstuff can save the moment. And when enough of these collect, these small shutdowns (not so bad, I can deal…), the quiet rejections (no really, it’s fine…), the potential for companionship snuffed out like that—when enough gather up they become a way of life for us, a thing we teach ourselves about ourselves.

And the grand Christian bet goes, it can all be conformed to Christ. Everything large and small. Every small sadness, every minor loss that is not so minor, never so small.

Our Lady of the Sorrowful Blue Gown, intervene for us. Help us confront the truth of our suffering, feel what we feel, give it to the One who confronted everything, and then move on. Get rid of our wretched coffee cup—you just sat there and did nothing whilst I was denied—and go back out and be willing to be delicately crushed again. Meaning we’re willing to be taken by surprise too. Yes, sure, I’ll go.

Joe Hoover, S.J., is America’s poetry editor. This essay has been adapted from his new book, O Death, Where Is Thy Sting? A Meditation on Suffering (Orbis Books). 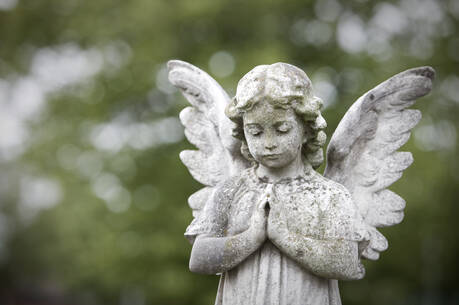 The blessings and sorrows of being a female Catholic hospital chaplain
My journal lists the names of 19 children this year who died after I spoke with their crying mother, their weary father.
Britt LubyMay 27, 2022