Catholic schools are facing the biggest enrollment drop in 50 years. This one is bucking the trend. 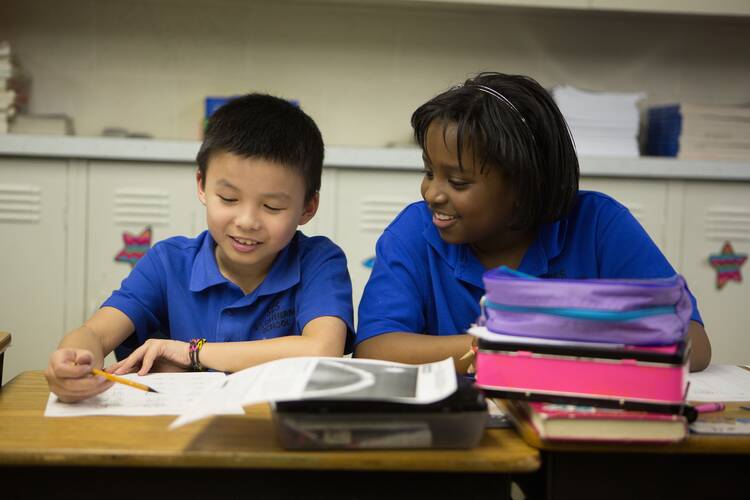 In this undated photo, students work together at St. Catherine of Siena School in the Diocese of Beaumont. The school's growing student population is diverse with 42 percent Latino, 25 percent Asian, 23 percent African-American and 10 percent Caucasian. (CNS photo/courtesy Catholic Extension)

Enrollment is going pretty well at St. Joseph, a small Catholic school in Anderson, S.C. The school nearly doubled its enrollment this year, increasing to 97 students from 56.

“A lot of people from the public schools came because we started back in August [for in-person classes], and they were not going to be back until later,” Haymée Giuliani, the school’s principal, told America. “The parents were working, so they just came over. Some of them thought it was just going to be for a few months, but they’re staying the full year. And it was a good experience for them to see the school.”

St. Joseph is bucking a national trend in Catholic schools. The National Catholic Educational Association reported Catholic school enrollment dropped by 111,000 last year, or 6.4 percent. That is the largest decrease in 50 years. More than 200 Catholic schools closed last year, compared with about 100 the year before. According to the N.C.E.A., the Covid-19 pandemic was a contributing factor.

Enrollment is going pretty well at St. Joseph, a small Catholic school in Anderson, S.C. The school nearly doubled its enrollment this year, increasing to 97 students from 56.

Yet at St. Joseph, Ms. Giuliani said the pandemic turned into an opportunity for the school to reintroduce itself to the small community. The population in Anderson is less than 27,000. The school accepted 10 qualifying preschool students through the state’s First Steps program, which supports children’s learning through age 5. St. Joseph now has a waiting list for preschool.

Nationally, Catholic preschool enrollment dropped by around 45,000, making up about 40 percent of the overall decrease. Annie Smith, N.C.E.A.’s director of data analysis, said a number of Catholic schools in the United States also had wait lists attributable to smaller class sizes due to social distancing.

Ms. Smith conducted a study with 1,400 families who joined Catholic schools for the first time. As is the case at St. Joseph, many families said in-person learning was a factor in their decision. “Families who have transferred have loved their experience,” she said.

Unfortunately, many of the schools that closed this year served low-income communities, including immigrant families. Catholic schools have traditionally served immigrant communities, according to Kathy Mears, the interim chief executive officer and president of the N.C.E.A.

Ms. Mears believes that one of the reasons families choose Catholic schools is the faith of the teachers. “We understand that we are the face of Jesus to children,” she said. “Kids know when they’re loved and cared for. It really matters. They see the relationship their teachers have with God and they want that relationship, too.”

María Torres-Green’s two boys are now at St. Joseph. Her family has been at the parish for a while, but before that the kids were in public school. Ms. Torres-Green, who works as an advocate for victims of human trafficking, invited Ms. Giuliani to give the opening prayer at a local Martin Luther King breakfast last year.

“I just fell in love with her and her spirit and her passion, and we talked a lot,” Ms. Torres-Green said. “She invited me to see the school, and it brought back those memories of when I went to Catholic school. It was like, yeah, this is what school is.”

Her husband visited the school the next month and also fell in love with it. Ms. Giuliani helped them look for financial assistance—most students at the school get some kind of tuition assistance. The couple now also volunteer at the school.

“Everything fell into place,” she said. “We thought [our kids] were doing great in public school, but then we realized they weren’t doing all these other things, like—this is going to sound silly—but science projects. We started noticing our oldest son was basically preparing for the standardized test.”

Ms. Torres-Green said her son’s spelling was falling behind but that his previous school would pass him anyway. “That’s not really preparing him to succeed, because at one point, you need to know how to spell,” she said.

Ms. Mears believes that one of the reasons families choose Catholic schools is the faith of the teachers. “We understand that we are the face of Jesus to children,” she said.

“Where we are, we have a large Hispanic population. St. Joseph is so much more diverse and has a smaller class size,” said Ms. Torres-Green, who is Puerto Rican. “Even my 5-year-old, you know, he was like, ‘A little boy came in, he can’t speak English.’ And so he’s like asking me, ‘How do I say this in Spanish?’ Because he wants to be able to communicate with this new child that came into class, versus, you know, he kind of gets drowned out in a large setting.”

Ms. Giuliani, who immigrated from Mexico, teaches the Spanish class. And a number of staff members at the school also speak Spanish. She became a principal, in part, because she wanted to reach out to the Latino community.

Some of the new students, Ms. Giuliani said, had disciplinary issues in their previous school. But some of it had to do with language and cultural differences, she said. Now their Spanish-speaking parents have a direct relationship with the principal.

“They know better now because before, the kids would be the ones translating for the parents to tell them what was going on,” she said.

Ms. Giuliani, who immigrated from Mexico, teaches the Spanish class. She became a principal, in part, because she wanted to reach out to the Latino community.

The local Knights of Columbus council is affiliated with the two Catholic parishes in Anderson—St. Joseph and St. Mary of the Angels, which is also a small parish. The two communities have come together to support the school, Ms. Giuliani said.

Another ingredient in their success, according to Ms. Giuliani, is prayer. “I mean it might sound cliché, but we had prayers from the parish and many people. When we needed something, we would pray for it,” she said. The students pray together in English, Spanish and Latin every morning.

For Christmas, she wanted to give her teachers a bonus, rewarding them for their hard work managing school during the pandemic. Often, that has meant teaching two classes at once—one for those there in-person and another for those online. Since she did not have the funds to give a bonus, she prayed about it.

“And someone just called us and told us she wanted to donate money for the teachers,” Ms. Giuliani said. “It was over $11,000. It was somebody that used to be a Catholic teacher up North.”

The faith aspect was the motivating factor for Heather Slaughter, who has three of her four children at the school. She said they lost the personal connection of Christian schools when the family chose public school for financial reasons.

“I mean it might sound cliché, but we had prayers from the parish and many people. When we needed something, we would pray for it.”

“There was nothing to be involved in at the school,” she said. “Our kids slowly just stopped being inquisitive about God. And they stopped singing their cute little Bible songs they used to learn in school.”

Her daughter was falling behind and not getting the specialized attention in the larger classroom setting, Ms. Slaughter said. She spoke with Ms. Giuliani, who told her they would do anything they could to have her kids at the school, including financial assistance. Both Ms. Slaughter and her husband had been quite involved at St. Joseph Church, including in the youth group before they had kids.

What Coronavirus Taught us about Catholic Schools
Kathy Mears

“It’s the behavior and the school part, but also just like wanting to know and love God,” Ms. Slaughter said.

The school took last summer to reset, according to Ms. Slaughter. They figured out what they needed to do to make it safe so parents felt comfortable sending their kids there. That took a lot of fundraisers, she said; and the school built a new deck area for gatherings, benches outside for music lessons, remodeling an outside prayer area, installing hand sanitizing stations and a regular, thorough cleaning process. They are raising money now to change the water fountain into one that can fill reusable bottles.

“They added to the outside playground some swings and those things. So I mean, my kids absolutely love it,” she said. “Oh my goodness, like I can’t even describe it. It just feels so amazing that my kids are learning about a different saint each week. They start the day with prayer, they learn prayer throughout the day, they have religion class, they do prayers before lunch, they do prayer before they leave the school. So like, praying to God is very much being instilled in them at school outside of our house, which is so invaluable.”