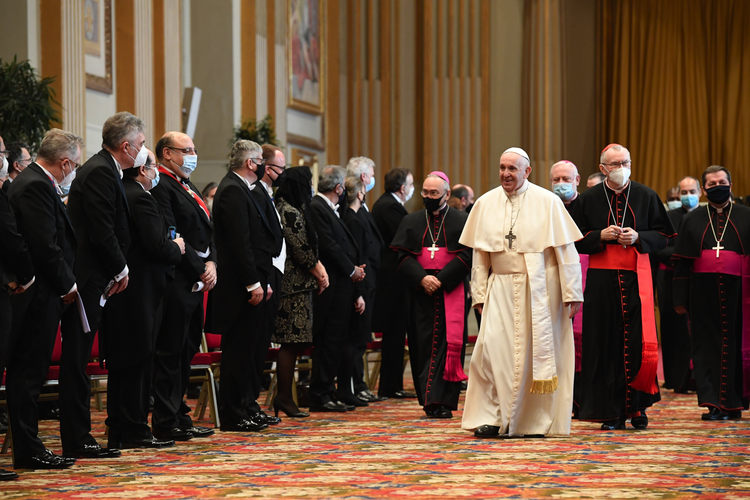 Pope Francis walks near diplomats accredited to the Holy See during an audience in the Hall of Blessings at the Vatican Feb. 8, 2021. (CNS photo/Vatican Media)

VATICAN CITY (CNS) -- The COVID-19 pandemic can either be a catalyst for change for the better or it will weaken a world already burdened by global crises, Pope Francis said.

The pandemic not only had a “significant effect” on people’s way of living, it also “shed light on the risks and consequences inherent in a way of life dominated by selfishness and a culture of waste,” the pope said Feb. 8 during his annual meeting with diplomats accredited to the Holy See.

The COVID-19 pandemic, he said, “set before us a choice: either to continue on the road we have followed until now, or to set out on a new path.”

In a nearly hourlong speech to members of the diplomatic corps, the pope listed a series of crises “that were provoked or brought to light by the pandemic” as a way to reflect on the opportunities the global community has to build “a more humane, just, supportive and peaceful world.”

The COVID-19 pandemic can either be a catalyst for change for the better or it will weaken a world already burdened by global crises, Pope Francis said.

The health crisis sparked by COVID-19, he said, forced the world to confront two “unavoidable dimensions of human existence” -- suffering and death -- which serve as a reminder of the value of life “from conception in the womb until its natural end.”

However, the pope said it was painful that “a growing number of legal systems in our world seem to be moving away from their inalienable duty to protect human life at every one of its phases.”

Pope Francis emphasized that the human right to dignity extends to all, especially the most vulnerable, and renewed his appeal to government leaders to “ensure universal access to basic health care.”

“Concern for profit should not be guiding a field as sensitive as that of health care,” the pope said.

The pandemic, he continued, also shed a light on the current environmental crisis and has shown “that the earth itself is fragile and in need of care.”

The pope said it was painful that “a growing number of legal systems in our world seem to be moving away from their inalienable duty to protect human life at every one of its phases.”

Direct and indirect consequences of climate change, including droughts, floods, malnutrition and respiratory diseases, he added, are the product of “prolonged inaction.”

“Overcoming these crises demands international cooperation in caring for our common home. It is thus my hope that the next United Nations Climate Change Conference to take place in Glasgow (Scotland) next November, will lead to effective agreement in addressing the consequences of climate change,” he said.

The economic difficulties that followed pandemic restrictions and caused many businesses to close “highlighted another illness of our time: that of an economy based on the exploitation and waste of both people and natural resources,” the pope said.

Calling for a “new Copernican revolution,” Pope Francis told the diplomatic corps that the world needs a new kind of economy that is “at the service of men and women, and not vice versa.”

He also said that economic stability must be ensured to “avoid the scourge of exploitation,” especially among the poor and unemployed, many of whom are driven by desperation and end up trapped in “forced labor, prostitution and various criminal activities, including human trafficking.”

“Concern for profit should not be guiding a field as sensitive as that of health care,” the pope said.

“The increased amount of time spent at home has also led to greater isolation as people pass longer hours before computers and other media, with serious consequences for the more vulnerable, particularly the poor and the unemployed,” he added. “They become easier prey for cybercrime in its most dehumanizing aspects, including fraud, trafficking in persons, the exploitation of prostitution, including child prostitution and child pornography.”

Pope Francis also highlighted the political crises that have arisen in the world, many of which directly threatened democracy “in countries with a long democratic tradition.”

“The development of a democratic consciousness demands that emphasis on individual personalities be overcome and that respect for the rule of law prevail,” he said. “Indeed, law is the indispensable prerequisite for the exercise of all power and must be guaranteed by the responsible governing bodies, regardless of dominant political interests.”

Urging respect for democratic principles, the pope expressed his solidarity with the people of Myanmar, where the country’s military staged a coup Feb. 1 and detained top political leaders.

Calling for a “new Copernican revolution,” Pope Francis told the diplomatic corps that the world needs a new kind of economy that is “at the service of men and women, and not vice versa.”

“The path to democracy undertaken in recent years was brusquely interrupted by last week’s coup d’état. This has led to the imprisonment of different political leaders, who I hope will be promptly released as a sign of encouragement for a sincere dialogue aimed at the good of the country,” he said.

Governments also must make greater efforts in disarmament, the pope said, emphasizing that violence around world, especially in Syria, has increased “at every level with the proliferation of weapons.”

“How I wish that 2021 may be the year when the conflict in Syria, begun 10 years ago, can finally end!” the pope said. “For this to happen, renewed interest is needed also on the part of the international community to address the causes of the conflict with honesty and courage and to seek solutions whereby all, regardless of ethnic and religious affiliation, can contribute as citizens to the future of the country.”

The pope also called for peace in the Holy Land, Lebanon and Libya and highlighted increasing political and social tensions, especially in the Central African Republic and Latin America.

“2021 is a time that must not be wasted,” Pope Francis said. “I am convinced that fraternity is the true cure for the pandemic and the many evils that have affected us.

Lastly, Pope Francis focused on “the crisis of human relationships,” which he said was “the most serious of all.”

Months of isolation and loneliness, he said, have “brought out the need of every individual for human relationships” especially for students unable to attend school. The pandemic has also had implications in the increase in domestic violence and restrictions on public worship.

Nevertheless, to overcome the crisis in human relationships, the pope called on the international community to “safeguard the transcendent dignity of each human person, created in the image and likeness of God.”

“2021 is a time that must not be wasted,” Pope Francis said. “I am convinced that fraternity is the true cure for the pandemic and the many evils that have affected us. Along with vaccines, fraternity and hope are, as it were, the medicine we need in today’s world.”