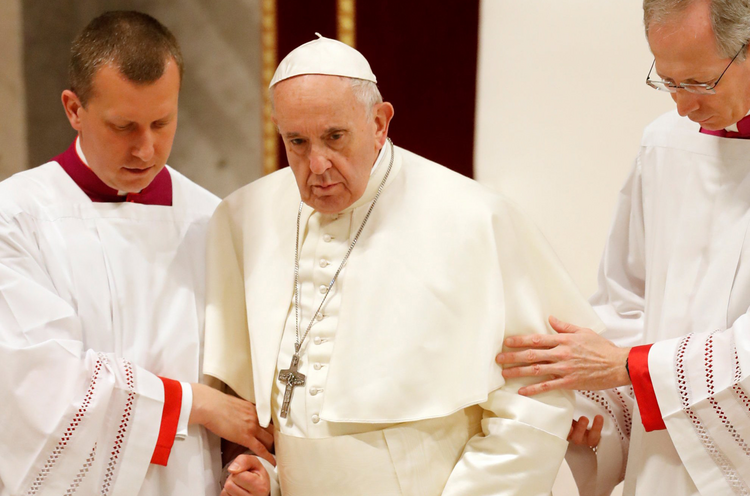 Pope Francis is helped down the steps during a prayer service in St. Peter's Basilica at the Vatican March 29, 2019. Recurring bouts of sciatica, a painful back ailment, often mean the pope needs assistance walking up and down steps. (CNS photo/Remo Casilli, Reuters)

Pope Francis is suffering from “a painful sciatica” and has cancelled his participation both at First Vespers and the singing of the “Te Deum” in St. Peter’s Basilica this evening, Dec. 31, as well as at the Mass for the World Day of Peace on Jan. 1, the Vatican press office director, Matteo Bruni stated at noon today.

He will, however, recite the Angelus at midday on Jan. 1 from the library in the Vatican’s Apostolic Palace, the Vatican spokesman said.

The Vatican said Cardinal Giovanni Battista Re, the Dean of the College of Cardinals, will preside at the vespers, and Cardinal Pietro Parolin, the Secretary of State, will preside at the Mass. Both events, as scheduled, will take place at the Altar of the Chair, behind the main altar in St. Peter’s Basilica. The Vatican said Cardinal Re will read the homily the pope has prepared for Vespers and, sources say, it is likely that Cardinal Parolin will do likewise at the Mass on New Year’s Day.

Pope Francis has suffered from sciatica for decades, and in 2007 he was paralyzed for some days in Rome when he came for a meeting and could not participate in that event. The sciatica is the reason why he walks unevenly, as has been more noticeable recently. When, however, this problem becomes more painful, he normally obtains relief from physiotherapy. A source suggested to America that he may not have been able to get his regular physiotherapist to treat him at this precise moment given that it is the high holiday season in Rome and strict Covid-19 restrictions are in place.

It is rare for Francis to cancel such public events. He did so on one occasion over a year ago when there was food poisoning in Santa Marta, the Vatican guest house where he lives, and many people fell ill.

It is clear, however, that Pope Francis, while suffering the pain, is not paralyzed this time, and those who saw him in these past days told America there is no cause for major concern, which is also confirmed by the fact that he will recite the Angelus and extend his traditional New Year’s greeting on Jan. 1 from the private library in the Vatican.

More stories from America
-The
Top 7 Pope Francis Stories of 2020
-Pope Francis announces a yearlong reflection on ‘Amoris Laetitia’ and family
-Read: An exclusive essay by Pope Francis on a ‘personal Covid,’ his exile in Argentina