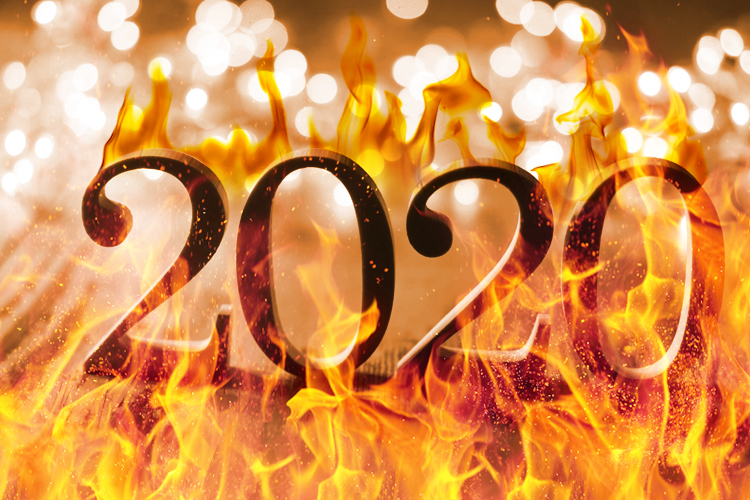 Maybe you had your dream wedding in February, just before it all happened. Maybe your Dodgers won a championship you had been waiting to see for a lifetime, or your candidate won at the ballot box. Though statistically unlikely, maybe neither you nor anyone you loved had a terrifying bout with the coronavirus. Even if everything went your way this year, you are likely in agreement: This has been a no-good, very bad, super terrible, agonizingly awful, horrible year.

Yes, I know, God was still active in 2020, doling out consolations and silver linings for us to cling to for dear life (though, in this writer’s estimation, they were far too few). There are those who will insist that we ought to look “on the bright side of things,” and those who will offer some other bit of Hallmark spirituality like, “He writes straight with crooked lines.”

There are those who will say that our silly habit of personifying calendar years is evidence of our insufficient theological training and our inability to reckon with the problem of evil, and that we just need to read Aquinas to understand why bad things happen. And the Marxists will say that it is because we refuse to direct our anger at the ruling capitalist class for failing us, and so we project it onto the inanimate.

Although my deeply cynical side hates to admit it, all those people are probably right, to some degree. It is good to acknowledge the good. It’s reminders like these that keep us going most of the time in crisis. But, for a moment, let’s ignore them. It is also good to remember that, at the end of a long hard year, it’s O.K. to have a few harsh, blunt words with God: What the hell, 2020 was just flat-out awful.

At the end of a long hard year, it’s O.K. to have a few harsh, blunt words with God

If I am honest, though, I want God to do more than just listen to me complain about how much this year made us all miserable. I want God to do something about it. And not just make 2021 suck less. I want God to take this past year and exorcise it, banish it and—dare I say—curse it.

A global pandemic, an economic crisis, an election year, sports cancelled, months of lockdowns and slowdowns. (I used to know what phase of lockdown we were in; now I have no idea if we are still doing the whole “phases” thing.) Executions, police killing black people and then beating people in the street who were angry about it, murder hornets, Tiger King, the end of movie theaters, the entire country of Australia burning (yes, that was 2020 but before the eternal month of March), the Kobe helicopter crash (that too), and so, so many dead, from Covid-19 and more.

I want God to curse it, to curse all the torment and horror and angst.

When I pitched this article, I half-expected my colleagues to admonish me, tell me that this was sinful and that I should feel bad for even thinking about it. While that might still be true, it turns out that some of them also had an odd spiritual urge. Yes, we should lament. Yes, we should hope. But there is some spiritual itch that hasn’t been scratched and it feels a little dark. I was also delighted to learn that there is some serious precedent in the Christian tradition for asking God to curse things.

There is some serious precedent in the Christian tradition for asking God to curse things.

James Martin, S.J., writes about this tradition in his forthcoming book, Learning to Pray:

In a practice that might alarm us today, some monasteries in medieval France used formal religious ceremonies to curse their enemies, a practice known as “clamors” or “maledictions.” From roughly the tenth to the thirteenth century, monks used imprecations in liturgies to ask God to defend their possessions and properties when appeals to secular authorities had failed.

Even Jesus himself famously cursed a fig tree in Mark’s Gospel, after looking for food and finding nothing but leaves, saying, “May no one ever eat of your fruit again!” It is a passage that is confusing only to scripture scholars and people who think they have to restrain themselves from letting out a four letter word when depleted of patience. Even if in my guts it feels bad asking God to curse things, here is Jesus, doing just that. If Jesus can curse trees, surely we should feel comfortable asking him to curse an inanimate calendar year, if only as a way of processing the emotions of the year. If only on our way to feeling—and asking for—something better.

Do I actually believe that God curses things? I don’t know. And while we have the image of Jesus cursing the fig tree, in the final analysis mercy is his language. But I do believe in the efficacy of prayer. This does not mean I expect God to wave a wand like a magician, but I believe that prayer changes the one doing the praying. We will never heal from trauma of the year if we don’t let ourselves do the hard work of lamenting and raging. Perhaps wanting God to curse the bad things that happen is both childish and necessary. And, if the Jesuits have taught me anything in my years learning from and working with them, it’s that the best prayer is an honest prayer. Punch your pillow, scream at the passing train, light your bonfires—these are appropriate methods of prayer at the end of a year like this.

Punch your pillow, scream at the passing train, light your bonfires—these are appropriate methods of prayer at the end of a year like this.

So let us dwell on the absolutely terrible, the wretched, the God-awful things that fell upon all of us in the Year of Our Lord, 2020, and ask God, in his infinite mercy, to curse them.

Lord, I don’t know what it actually means for a year to go to hell. But if hell is hot, let 2020 burn; if hell is cold then let it freeze, the way your nostrils freeze when you try to breathe on a very cold day, but make it a thousand times worse.

May worms rot the guts of 2020. May its evil be banished for a millennium or more. Let us stand in the ashes of the old year, spit in its grave, and rise—armed with your abundant grace and some fresh vaccines—ready to build a better world and a better year. In saecula saeculorum. Amen.

(Editor’s note: Please feel free to add your own curse prayers in the comments section at the bottom of this page)

[Read this next: James Martin, SJ: A New Year’s prayer for nearly everyone]

Show Comments ()
Join the conversation: Login or create an account
Before you can comment, you need to update your profile to include your first and last name, as required in our comments policy. Then reload this page and you'll be set up for commenting. Update your profile
More: Prayer