What got Father James Martin through 2020 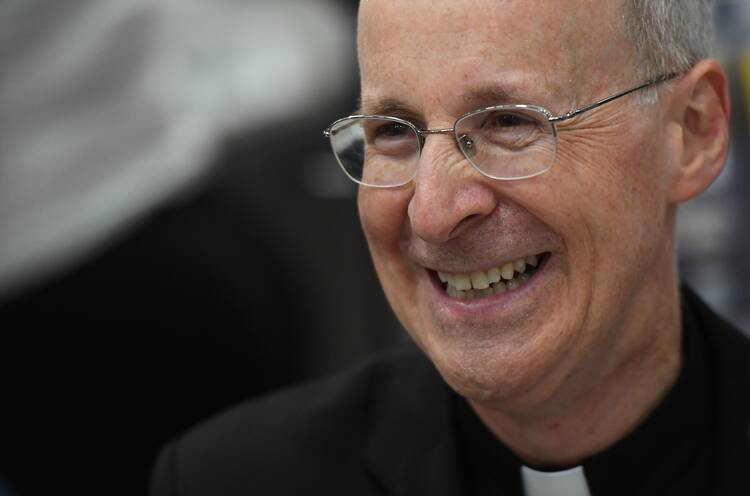 Editors’ note: What do Bishop Robert E. Barron, two well-known Jesuit priests and two leading religious sisters in the United States have in common this pandemic year? All five confessed to binge-watching “The Crown.” Although, in a series of interviews, by phone and email, America has learned that the similarities between these prominent members of the U.S. Catholic Church are not limited to watching British period dramas on Netflix. If nothing else, all five are agreed that 2020 has been quite the year for spiritual revelation and renewal. The interviews have been edited for clarity and length.

In this interview with James Martin, S.J, Jesuit priest and author of the forthcoming book,Learning to Pray (out Feb. 2021 from HarperCollins), he shares how this year has made him—and us all—more like monks.

While we were celebrating Mass in our Jesuit community chapel on Dec. 21—the shortest and darkest night of the year—there was a huge dumpster fire on the street outside, with flames leaping up to six feet into the air. I thought that was the perfect image of 2020—a literal dumpster fire.

For the example of the doctors, nurses and healthcare workers who stepped up and put their lives on the line during the height of the pandemic. To me, it seemed like God was offering us a sort of parable. God was saying, “I love you as much as the doctor who goes into the hospital during the Covid-19 pandemic.”

There was a huge dumpster fire on the street outside, with flames leaping up to six feet into the air: I thought that was the perfect image of 2020—a literal dumpster fire.

I took for granted the ability to visit my family and friends easily—which I really miss—and also the enjoyment of going into the office and interacting with my work friends. Finally, I’ve missed the ability to travel, give lectures and do book signings. I generally don’t like traveling, but I like meeting new people and I’ve missed that this year.

That said, I found that I was able to live more “monastically” than I had ever thought possible. We’re all—and I mean everyone in the world—monks now. Almost everyone now gets up in the morning in the same place; we do the same thing every day; we look at the same four walls; we don’t go anywhere. We’ve all taken an unintentional vow of stability.

Monastic life has always held a great deal of appeal for me. And a few months ago, I realized this is the way I’m now living. I’m living in a community with 12 of my brothers and we’re always home, eating every meal together and celebrating every Mass together. I didn’t think I’d be able to live this way, but with God’s grace I’ve been able to live this monastic way—so far.

We’re all—and I mean everyone in the world—monks now.

Certainly, my eight-day retreat was very powerful this year. I did it virtually, meeting with a retreat director via Zoom, and the prayer was just as deep as if I were at a retreat house. Funny enough, I said to my retreat director, “This is almost like a real retreat.” And she said, “It is a real retreat.” So those eight days were very consoling. And, as I just mentioned, one of the most helpful insights for me was realizing that monks do this, and have done this, for centuries: doing the same thing every day and looking at the same four walls. Once I realized that, I thought, “They’ve done it and so it’s doable.” That was very freeing.

What new hobby did you take-up during the most intense months of lockdown? Was there an old pastime you revived?

I’m running more, just to get out of the house. All the gyms are closed, and so I’ve been running in Central Park, which has been enjoyable and something I haven’t done in years. Although you have to do it at the right time of day and in the right place to avoid any danger (i.e., muggings and so on). You can take your life in your hands if you run the wrong time of day in New York City.

Life is fragile; life is beautiful, special and sacred. That’s a lesson for every year but as we see more and more people who are sick, or on the edge of life or dying, it becomes more and more in the foreground. It’s a profound message that has just been highlighted this year in a way that I can’t remember it being highlighted.

Life is fragile; life is beautiful, special and sacred. It’s a profound message that has just been highlighted this year.

Tell us the funniest thing that happened to you this year.

During the height of the pandemic, our Jesuit community would gather on our roof to cheer the hospital workers, as many in New York were doing at the time. Well, in the apartment building next to us, an elderly woman with snow-white hair would come to her balcony every night and bang on an old cafeteria tray. And we’d all wave to her. She looked very much like a Catholic sister, and so we came up with a whole backstory for her. She’s Sister Clare, and she’s a Sister of Charity of Halifax who was in leadership in her province and was now working as a spiritual director in New York City.

Every night, as the pandemic wore on, her story got more and more elaborate and detailed: the cafeteria tray was a gift from her students when she was an elementary school teacher; she was very fond of Richard Rohr; she had done a spiritual direction practicum at Eastern Point Retreat House in Gloucester in the early 1980s, and so on. At times another woman would appear on the balcony. She was Sister Norma, who had been a Sister of St. Joseph of Brentwood but had left to join Sister Clare’s order. So we had to make up a backstory for her, too.

One night she wasn’t there, and one of the Jesuits said immediately: “Oh, Sister Clare’s on retreat for a few days. She’s doing it virtually, with her favorite director at Eastern Point.” Honestly, it still makes me smile. We wanted to have her over for dinner one night. I’m sure in reality she’s some chief executive officer or corporate attorney.

Looking at people who have given themselves so selflessly during this time: the health care workers who put their lives on the line; the public officials who carried out their jobs during the election with integrity; and the people who are trying to live one day at a time in the midst of great difficulties and sickness and the loss of job and financial problems. That’s very inspiring to me—just people who are able to get up and go on with life, quietly and unobtrusively. Pope Francis called these people the “saints next door.”

Good riddance, 2020! You know, everyone says, “I hope things change,” and I hope that they do. But as you’ll recall, everything didn’t change after 9/11, which was the last time everyone said, “Nothing will ever be the same.” For example, I don’t think we were instantly more compassionate and loving in the wake of 9/11. Maybe for a few months but not permanently. And so I hope we will change after the pandemic—but I’m not sure. I like what Pope Francis said—I’m paraphrasing a little but it’s something like this: The pandemic is not God’s judgment on us. It’s an invitation for us to judge what’s important.

I like what Pope Francis said: The pandemic is not God’s judgment on us. It’s an invitation for us to judge what’s important.

Yesterday I finished a novel that was originally in Portuguese called The Gospel According to Lazarus by Richard Zimler. It’s the fictional memoir of Lazarus (whom I’m writing a book about), and his description of the crucifixion is just extraordinary. I found it really compelling.

The film or documentary that changed you this year?

“The Social Dilemma” on Netflix, which revealed how destructive social media can be and how some social media companies twist our sense of what’s important. That was a pretty stunning film.

All four seasons of “The Crown” as well as “Schitt’s Creek” and “Broadchurch”—all on Netflix.

“The Last Anointing,” by Elizabeth Dias, for The New York Times, about priests in ministry carrying out last rites during the pandemic. The way Elizabeth reported it was really extraordinary—just beautifully written—and for me as a priest a teaching moment.