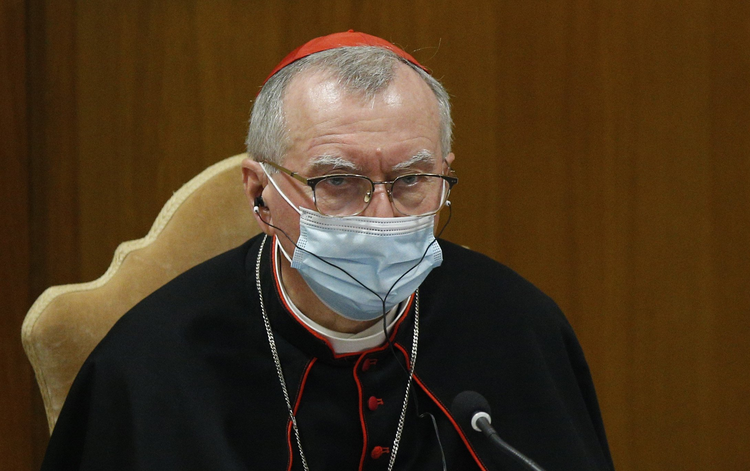 Cardinal Pietro Parolin, Vatican secretary of state, wears a mask for protection from Covid-19 during a press conference for the release of Pope Francis' new encyclical, "Fratelli Tutti, on Fraternity and Social Friendship," in the synod hall at the Vatican Oct. 4, 2020. (CNS photo/Paul Haring)

Cardinal Pietro Parolin, the Vatican Secretary of State, has been hospitalized at Rome’s Gemelli University Hospital, the Vatican press office confirmed today. Cardinal Parolin, 65, was admitted for surgery for an enlarged prostate, common in men over 50, and it “is expected that in a few days he should be able to leave the hospital and gradually resume his work,” according to Matteo Bruni, the director of the Holy See Press Office.

Cardinal Parolin’s hospitalization is unrelated to the novel coronavirus, but comes at a time when Italy is facing a resurgence of the virus, averaging around 20,000 new cases a day in the last week.

The Secretary of State is considered the Vatican’s second top-ranking official after the pope. Cardinal Parolin addressed the United Nations General Assembly in a pre-recorded video message on Dec. 3, urging world leaders to ensure that the coronavirus vaccine be made available and affordable to people in developing countries. In recent months the cardinal has overseen the release of the Vatican’s report on former Cardinal Theodore McCarrick and the renewal of the Holy See’s agreement with China on the ordination of bishops.