What would Mary have been like as a friend? 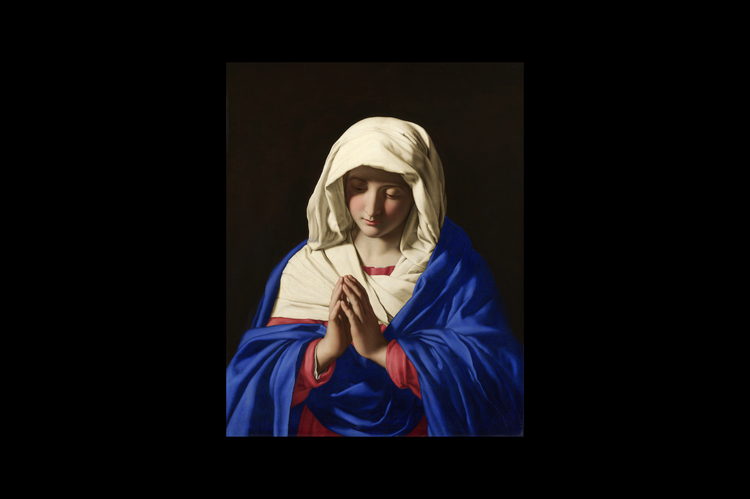 The Virgin in Prayer by Sassoferrato, 1640–1650. National Gallery, London. (Wikipedia)

A reading from the Gospel of Luke

The angel Gabriel was sent from God
to a town of Galilee called Nazareth,
to a virgin betrothed to a man named Joseph,
of the house of David,
and the virgin’s name was Mary.

And coming to her, he said,
“Hail, full of grace! The Lord is with you.”
But she was greatly troubled at what was said
and pondered what sort of greeting this might be.

Then the angel said to her,
“Do not be afraid, Mary,
for you have found favor with God.
Behold, you will conceive in your womb and bear a son,
and you shall name him Jesus.
He will be great and will be called Son of the Most High,
and the Lord God will give him the throne of David his father,
and he will rule over the house of Jacob forever,
and of his Kingdom there will be no end.”

But Mary said to the angel,
“How can this be,
since I have no relations with a man?”

And the angel said to her in reply,
“The Holy Spirit will come upon you,
and the power of the Most High will overshadow you.
Therefore the child to be born
will be called holy, the Son of God.
And behold, Elizabeth, your relative,
has also conceived a son in her old age,
and this is the sixth month for her who was called barren;
for nothing will be impossible for God.”

Mary said, “Behold, I am the handmaid of the Lord.
May it be done to me according to your word.”

Then the angel departed from her.

What would Mary have been like as a friend? I mean for her fellow Nazareans. I imagine she would have been a great listener. She would stand by you in difficult times. She definitely would not talk behind your back. And she would probably assume your best intentions.

Mary would care for you when you felt ill, but would also hold you accountable when you fell short of doing God’s will. She’d be a model of faith.

Mary is a friend and mother who leads by her courage and example. Let it be done unto us according to God’s word.

For me, it’s easier to think of Mary as a friend than to fathom what it means to be conceived without sin. I just don’t have any frame of reference for that! But, I do find in my loved ones many characteristics I ascribe to Mary. My father is there for me when I’m angry. My mother brought me to Mass and encouraged me in my Catholic faith. My wife holds me accountable, especially in being a better father.

They don’t need to reflect Mary completely. After all, Mary is here for me herself when I am lonely, when I’m tired, when I feel rejected or defeated. And she’s here, too, when I feel that indescribable joy in creation, those moments when I recognize God’s grace both in and around me. I can fly unto Mary, the Immaculate Conception, the Mother of God, who is also mother to all of us. She is a friend and mother who leads by her courage and example. Let it be done unto us according to God’s word.