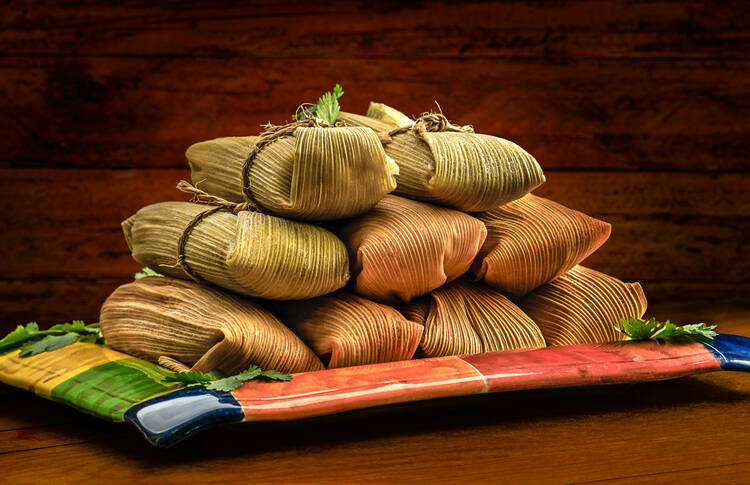 Abraham Lincoln, thanks to the persistence of Sarah Josepha Hale, made our nation’s annual day of gratitude official in 1863. Since then, the many people of various cultures that make this country their home have embraced Thanksgiving—each culture adding its own spice, of course.

My mom, who’s from the Dominican Republic, usually makes her delicious flan. (She has special pots from the D.R. that she swears make all the difference.)

My family moved to Puerto Rico when I was young, and we often joined my childhood best friend’s family next door for their Thanksgiving celebration. My memory was a bit vague, so this weekend I called Marlene, my friend’s mom, to talk about it. She told me that of course they celebrated Thanksgiving in Puerto Rico—it’s part of the United States, “and we are born U.S. citizens!”

At her house, they marinate the turkey the day before Thanksgiving, and it “is always the king of the table,” she said. But this turkey is stuffed with carne molida (ground beef). Batatas and seasoned white rice are another staple, along with apple pie. Everyone gets a chance to say what they’re thankful for.

“Latinos and Latin American immigrants, we like to adopt the spirit of the celebration without adopting the whole menu,” Mar Muñoz-Visoso, the executive director of the Secretariat of Cultural Diversity in the Church for the U.S. Conference of Catholic Bishops, told me. She said her Thanksgiving usually doesn’t include turkey and cranberry sauce.

“We’re a people that like to celebrate life,” she said of the Latino community. “Thanksgiving is not something we have in the countries we come from, but it’s a spirit we can get into.”

Instead of turkey, in her household they will have tamales or lomo relleno. Capirotada, a traditional Mexican dessert, is also prepared. In her family, they go around the table to give thanks, starting with the oldest and ending with the youngest.

“We’re a people that like to celebrate life. Thanksgiving is not something we have in the countries we come from, but it’s a spirit we can get into.”

“It says a lot about Latino culture. We like to celebrate. We like to express gratitude,” she said. “And we like to spice it up with our own flavors.”

Ms. Muñoz-Visoso noted the immigrants who came to the United States did so “fleeing violence, a lack of liberty and not being able to feed their families. They are grateful for being here and having a chance to work and support their loved ones.”

“But we’re not limited to that,” she said. “We’re grateful for people who have helped us, not just the government, but those who have given us a helping hand. We’re very attuned to and thankful for compassion. We will never forget it. We gather to celebrate and spread that.”

I certainly remember my third-grade teacher, Ms. Rowe, who was so patient with me as I fumbled through spelling and other subjects the year my family moved to Arizona from the Caribbean. For our Thanksgiving project that year, she asked us to draw something Thanksgiving-related on a paper plate and then write something we were thankful for next to the drawing.

I drew my best turkey, which wasn’t great. Ms. Rowe nevertheless deciphered it. But she was puzzled by what I’d written. “What’s this say?” she asked me gently. “Gobble gobble?” I’d intended to write “God,” but my spelling was a bit off... “Gob.”

Maybe it’s because of the history of Latin America, with so many cultures coming together, but it seems to me that Latinos tend to be open to other cultures.

My brother-in-law, Juan, was born in Santiago, Dominican Republic, and grew up in Washington Heights in New York City. He told me that as a kid, Thanksgiving “was just another chance to hang out and celebrate with the family.” They had a big Dominican feast, with pernil, pollo guisado and rabo, and the gathering usually included dancing. Good for digestion, right?

Maybe it’s because of the history of Latin America, with so many cultures coming together, but it seems to me that Latinos tend to be open to other cultures. Steffano Montano, a visiting assistant professor at Fordham University, said it’s as if Latinos have become “masters of bringing cultures together.”

“It’s the way we’ve survived in many respects,” he told me. “The ability to find ourselves amidst in-between.” In Latin American history, there is both a biological and a cultural blending of peoples. While Indigenous traditions remain today, colonization led to the erasure of many Indigenous societies, Mr. Montano said.

“We have to hang on to who we’ve been and also embrace who we’re becoming,” he said.

Even during a pandemic, those of us living in the United States have so much to be thankful for.

Mr. Montano is my professor in a great Latinx Ministry class that I’m taking. We spoke on FaceTime about what Thanksgiving was like for him as a Cuban-American growing up in Miami. The large family gatherings included a feast with turkey, lechón (a pork dish), arroz congri and pastelitos.

“It wasn’t about the pilgrims,” he said. “It was about giving thanks for the good times and for the grace to get through the hard times.”

His parents and grandparents, who came to the United States from Cuba in the 1960s, saw Thanksgiving as a way to be more American. They didn’t understand the colonial implications of the Thanksgiving myth. “It was an excuse to get together and look more American,” Mr. Montano said.

Because of the pandemic, he won’t be joining his family in Miami this year for Thanksgiving. My friend Marlene will not be celebrating in person with her kids and grandkids in Puerto Rico. But even during a pandemic, those of us living in the United States have so much to be thankful for. On my gratitude list, I have the many Latin American cultures I have experienced thanks to my work in Catholic media. ¡Mil gracias, hermanos y hermanas!

– I’m a priest and public health professor. Here’s my advice for re-thinking Thanksgiving this year.
– I tried to teach kids about Thanksgiving and the Eucharist—and got a lesson on the Holy Spirit instead
– Where does gratitude fit in the spiritual life?