Bishop Flores evangelizes on Twitter. Now he is in charge of doctrine for the U.S. bishops.

Bishop Flores evangelizes on Twitter. Now he is in charge of doctrine for the U.S. bishops. 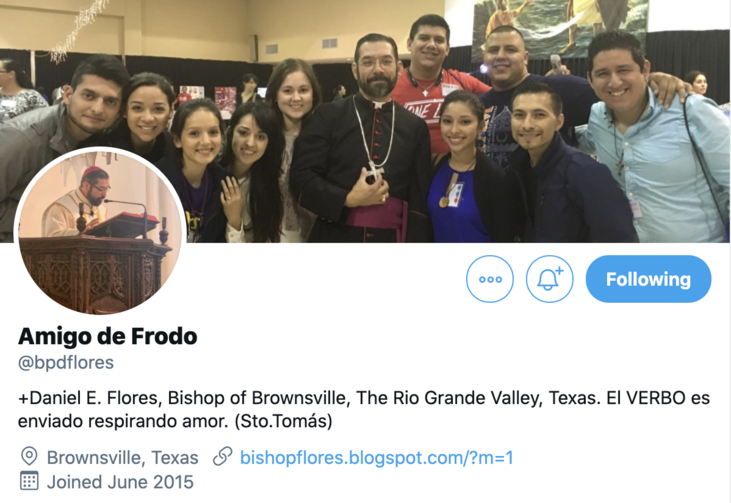 The Most Rev. Daniel Flores, bishop of Brownsville, Tex., since December 2009, was elected head of the Committee on Doctrine of the U.S. Conference of Catholic Bishops on Nov. 16. I interviewed Bishop Flores by telephone about the meaning of his new role and episcopal ministry. The following transcript of our interview, to which Bill McCormick, S.J., contributed questions, has been edited for style and length.

What does the U.S. bishops’ doctrine committee do, and how does it affect daily Catholic life?

The bulk of its work is reviewing anything the U.S.C.C.B. as a body wants to publish—for example, the letter on racism we put out, which I helped work on. Everything has to go to the Committee on Doctrine so it has a chance to read it, offer recommendations in terms of editing and just make sure that it has the full expressive weight of the church’s faith. It’s a lot of reading; you’d be surprised how many documents and statements there are. If it’s going to come from the full body of bishops, it has to go through not just our committee, but through a lot of other committees as well.

What does doctrine itself have to do with everyday Catholic life?

Doctrine touches everyday life because when it comes to the work of parishes—catechesis, evangelization, social outreach, those sorts of things—it’s ultimately all related to the Trinitarian and Christological faith of the church and the sacraments. All of it’s related to what we do every day, in terms of social justice and our life.

Your Twitter thread on “getting through the storm” of the presidential election was a hit. What inspired it?

The advice I was giving people and posting in that thread was practical: How do you keep your mind from being overwhelmed by what can sometimes be a rhetorical storm that makes you want to crawl up in bed and cover your head with your covers? There’s a way to help people think about this. It’s not easy, it’s very hard, but you have to pray and know what to say.

One of the things I’ve said very frequently is that we have to let the Christ of the Gospels, and the mind and the heart of the church in our experiences, be the lens by which we look at the world, not the other way around. That’s a constant battle we have as human beings, especially in a world so obsessed with the political as if it were a religion. So people were asking me about this, and I tried to keep it real.

One of the things I’ve said very frequently is that we have to let the Christ of the Gospels, and the mind and the heart of the church in our experiences, be the lens by which we look at the world, not the other way around.

You tweeted that ignorance of non-white cultures is pervasive in the United States. What can we do about that?

What I have tried to say in lectures over the years, and in some of my Twitter comments, is that especially in the church, the only path for us pastorally is that you have to know the communities where you live. Too often, even if we’re neighbors in some way, we don’t get to know each other. In a parish we have to do that. Local communities are distinct, and they have their own affections for certain ways the mystery is expressed, and there’s a certain respect for that. But there also has to be a certain ability to appreciate it as a gift.

You know, I was in Detroit for a few years, and I enjoyed that because it was so diverse, not only with the Hispanic community, but with African-American communities and communities from the Middle East. You just got to know and appreciate the individuality of it. No way as a church can we minister to people if we use blanket generalities to describe who they are or how they’re supposed to act. The model of the church is not everyone ends up being the same; the model of the church is that diversity is something that works within the rhythm of catholicity.

What principles guide your approach to social media?

Be polite. Try to say things you think are true, and if someone wants to take a little different take on it, that’s okay. That’s how we help each other to expand on things. Have a sense of humor. One of the reasons I have a funny handle is I think you have to have a certain sense of humor. Not everything has to be an earth-shattering topic. I’ll talk about books, poems and my dog. But as a bishop, I want to say something every day about what Jesus says, and that’s what I try to do every morning. I do think the social media world is an expression of what I take to be the teaching of the Second Vatican Council, which is first of all the teaching of the Gospel. It’s about what Jesus said and not what I say.

You come from the U.S.-Mexico border, an area everyone talks about even if they haven’t experienced it. What do you want people to know about it?

My family has [had] roots on the border for a long time, and I’ve grown up in that family culture. Bicultural isn’t even the word. It just flows so easily here along the river that you’re familiar with customs that come from Mexico, you’re familiar with customs that come from the United States, and they just coexist rather nicely in the way people understand themselves. If you live in the United States on the Mexican border, there’s great love for the United States and the freedom that it brings to live here, but there’s also a great affection for the customs and family life rooted in an older sort of history that goes back even before this area was part of the United States.

There’s a cultural memory. People are very comfortable with languages, and all of my homilies are partly in English and partly in Spanish. This is a fairly poor diocese and there’s no shame in that, because it’s a very generous diocese where people try to take care of each other. This is what the church means by enculturation of the Gospel. It’s a spirit of generosity that we saw when Central Americans came through here, and we’re still trying to help them in that camp right across the border in Matamoros, Mexico, waiting for their situation to resolve itself.

You have a great love for St. Thomas Aquinas. What wisdom does he have for us today?

I just have a great love for the tradition, and St. Thomas has a certain way of expressing himself that I find particularly lucid. I think his deep sense of how everything is connected to the incarnation of the Word touches everything from questions of the life of the church to the sacraments. It touches our care for the dignity of the human person. All of these things are held together and take us to a Trinitarian place.

There’s a great sense in St. Thomas of wanting to show the relation that connects everything in the mystery of God’s love for us in Christ. I think sometimes people will sometimes get dry reading the Summa, but at the same time you can get into the rhythm of how he expresses things, even poetically at times. You kind of have to look for that. It’s about the complete cohesion of the mystery of God’s love that comes into the world.

The U.S. Bishops should find ways to collaborate with Joe Biden (and not alienate him)
J. Kevin Appleby

I have so many and I’m sure I’ll think of more as soon as I hang up. But one comes to mind: “In the beginning was the Word” (Jn 1:1). The Word becoming flesh is everything. That’s why I’m very careful with words. I’m not always as careful as I’d like to be, but we have to respect them, because they are that precious link to where we come from. We were created in the world with intelligibility, meaning, purpose and beauty.

What are your hopes for your new job as head of the U.S. bishops doctrinal office?

That we get our work done as it comes forward, that I listen to people. I think one of the great challenges right now—and Pope Francis is a model of this—is that we’ve got to find a way to talk to people and speak about our faith in a way that’s understandable. That’s what doctrine is ultimately all about: It’s understandable and connected to us. We live in a world that has many concepts that do not have an origin in the Gospel, and there’s no point complaining about that, but we do have to share the mystery of God’s love in a language that connects in some way to what makes sense to people.

Show Comments ()
Join the conversation: Login or create an account
Before you can comment, you need to update your profile to include your first and last name, as required in our comments policy. Then reload this page and you'll be set up for commenting. Update your profile
More: Bishops